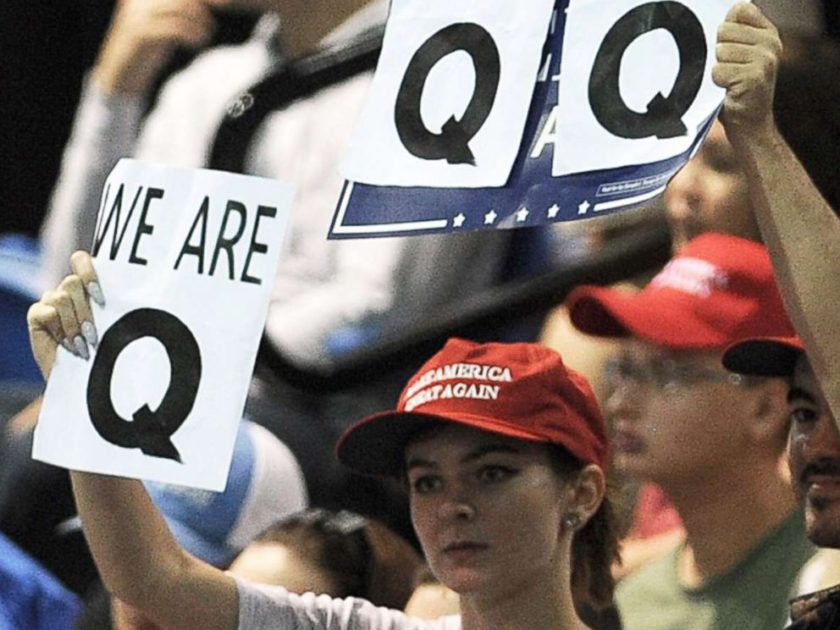 Roughly about a month about I was writing about QAnon, a very modern conspiracy claim. Today I’ll turn once more to the topic to highlight some recent developments within this rather popular cesspit of misinformation and utter nonsense.

First, a quick bit of background

OK, so moving on, what new twists and turns has it all been taking?

It would appear that the election of a QAnon believer to congress who is openly running on a platform of QAnon beliefs is now a very real possibility.

Marjorie Taylor Greene, Pictured above, is a Republican congressional candidate running to represent Georgia’s 14th congressional district. Last Tuesday (June 9, 2020) she dominated a Republican primary and is moving to a runoff with a high likelihood of clinching the House seat.

She loves Trump and vigorously supports him.

There are clips of her promoting QAnon …

If she gets the Republican nomination in the runoff (scheduled for Aug 11), then the seat will most probably be hers when we get to Nov. This is a solid Republican seat.

The point is this.

A conspiracy claim from the lunatic fringe has emerged into the mainstream Republican arena. She is winning support from powerful Republicans such as Reps. Jim Jordan, Matt Gaetz, and other prominent Trump-aligned figures, including Turning Point USA leader Charlie Kirk. She also got money from a PAC tied to White House chief of staff @MarkMeadows

QAnon is not her first disconnect with reality and facts. She has a history of conspiracy thinking – for example she promoted conspiracy theories about the 2017 Las Vegas mass shooting, proposing in social-media posts that the shooting was staged or somehow covered up by the FBI to promote gun control.

The Church of QAnon

A completely separate item, but still on the topic of Qanon updates, we have an article published within The Conversation asking this question – The Church of QAnon: Will conspiracy theories form the basis of a new religious movement?

I have been studying the growth of the QAnon movement as part of my research into how extremist religious and political organizations create propaganda and recruit new members to ideological causes.

On Feb. 23, I logged onto Zoom to observe the first public service of what is essentially a QAnon church operating out of the Omega Kingdom Ministry (OKM). I’ve spent 12 weeks attending this two-hour Sunday morning service.

The resource page of the HCW website only links to QAnon propaganda — including the documentary Fall Cabal by Dutch conspiracy theorist Janet Ossebaard, which is used to formally indoctrinate e-congregants into QAnon. This 10-part YouTube series was the core material for the weekly Bible study during QAnon church sessions I observed.

At a service held on April 26, Wagner and Bushey spoke about a QAnon theory, called Project Looking Glass, that the U.S. military has secretly developed a form of time-travel technology. Wagner suggested to e-congregants that time travel can be explained by certain passages in the Bible.

On May 3, the theme of the QAnon portion of the service was about COVID-19. Bushey spoke about a popular QAnon theory that the pandemic was planned.

The key point he is making within this article is this …

we should be concerned about these latest developments. OKM provides formalized religious indoctrination into QAnon, a conspiracy movement that is both a public health threat by spreading false information about the coronavirus pandemic and a national security concern.

Indeed yes, they are tapping into religion and blending it in so that a considerable degree of uncritical thinking can be ramped up and merged with passionate religious fanaticism.

We might indeed laugh at the utter absurdity of it all, but we should also be seriously concerned.

What weapons should we deploy?

The very best; humour and mockery. They have set themselves up for that, so let’s strive to deliver. With their time-travel technology they should see that all coming … right?14