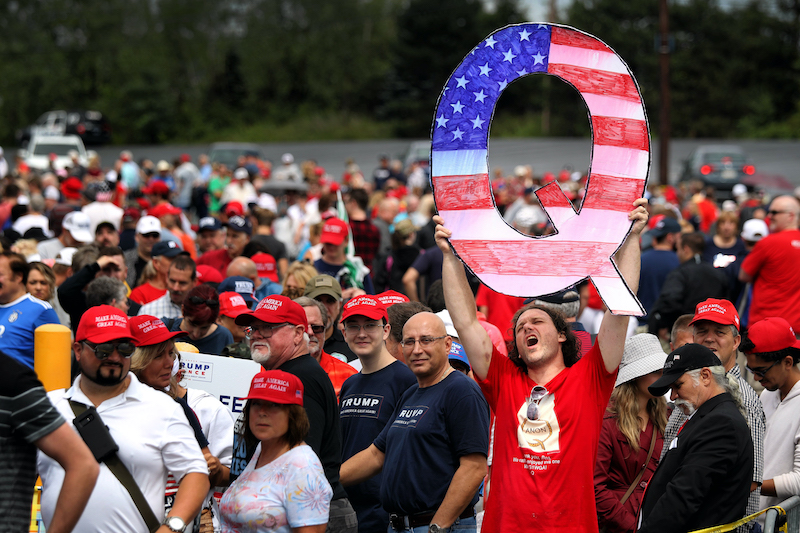 I occasionally write about QAnon. It is in one sense fascinating to observe this very modern political/religious cult emerge. It is also of immediate interest to us all to understand what new lunacy is about to come barreling into the political landscape.

Moving on, let’s see what has been happening in the past week within the QVerse

Amarnath Amarasingam, an assistant professor in the School of Religion at Queen’s University in Ontario, Canada, writes within Slate about how Pro-Trump conspiracy theories may have actually discouraged post election violence. The article is “Keep Calm and QAnon” and so that title kind of sums up the observational thinking.

If you do have your finger on the right-wing pulse then you can’t has missed the rhetoric from some extremists. They have been promising a violent revolution if Trump should loose the election.

The election has been clearly lost, states have indeed now certified … yet thankfully so far no widespread violence.

The fear is not simply mine, many were thinking along these lines with deep worry. We have in fact seen some events of deep concern. The QAnon movement has motivated several individuals to engage in violence, kidnapping plots, and vandalism, so fears of further more widespread violence were not unwarranted.

As explained by the Slate article …

Many experts, then, were justifiably worried leading up to the election about what a Trump loss might mean, and how these individuals might react. Two weeks after the election, I participated in a  global forum organized by the RESOLVE network, a global consortium of extremism researchers, on what violent extremism might look like in 2021, and the potential for fringe conspiracies to produce violence was one of the main issues we discussed. Every terrorism researcher was worried about it.

This notion that Trump “has a plan,” a sentiment deeply engrained in QAnon lore, kept these individuals glued to their seats. As one QAnon supporter wrote on Telegram, “Right now, Trump is sitting on a stack of Trump cards that he is just waiting to lay down like a Royal Flush. … Things are falling into place. He knows he won and they cheated. He gave them the chance to fix things. They chose not to. Now they all go down.”

The problem here is that this may simply be a lull. Reality has yet to sink in. The calls for violence are still there …

As one QAnon follower wrote on Telegram, “You aren’t a great country if you accept Biden to be inaugurated. You have firearms,”

As Joe Biden is inaugurated, and as Trump boards the helicopter and gives a Nixon-esque wave for the last time, there is no telling how some of them might respond. These conspiracy theories themselves seem to have, surprisingly, kicked the election-violence can down the road. Let’s hope they never find it

The political reality of those that believe Conspiracy Theories

Rather obviously the GOP and many elected officials now pander to rather blatant conspiracy theories.

The very idea that Trump is some form of Genius who is playing a political game of 3D chess is something that most of those who actually know him laugh at. The man is incompetent, unread, and deeply ignorant. You don’t need to accept my word on this, it is well documented.

What is perhaps potentially worrying for the GOP is the data from various scientific studies into the impact of conspiracy thinking. They reveal that those that embrace conspiracy theories…

Setting them up as your primary base of supporters is not exactly a winning strategy in the long run.

One Last Thought for now

QAnon is most probably here to stay. Like most beliefs that thrive, it will adapt to circumstances and evolve.

Basically because so many have invested a great deal into it emotionally. Letting go of that and coming to terms with such a waste of their time and resources for this modern myth is simply too big a leap for them to take.

What is perhaps also rather obvious is that QAnon will be very much among the Biden national security team’s concerns. Rightly so, because it poses a very real domestic threat to social stability.

Let’s for now hope that as the belief adapts to actual events, it does so in a manner that continuously kicks the can of political violence so far down the road that they never find it.