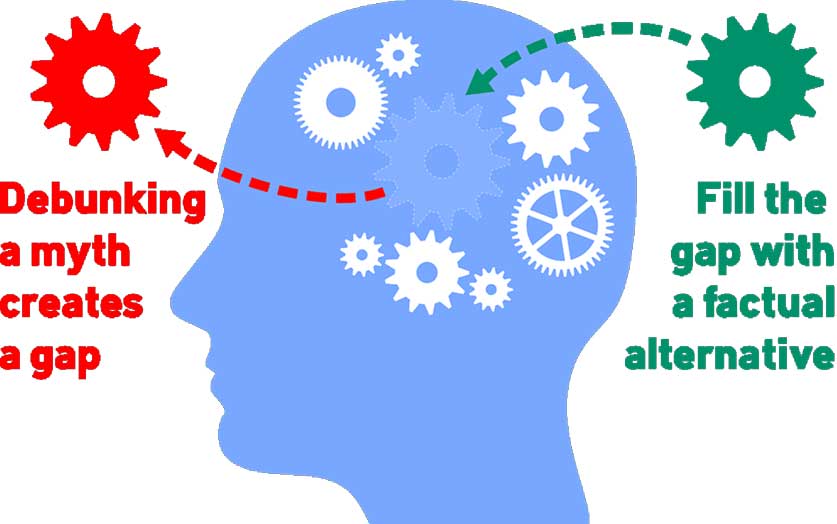 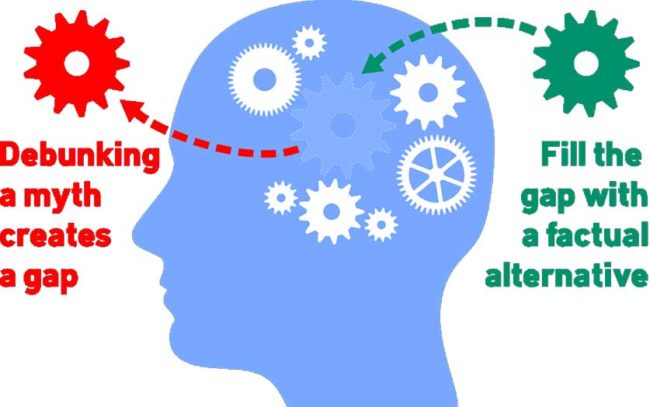 Before we dip into the context of Fake News, let’s first cover the basics. The vaccine concept is generally known but let’s repeat it anyway for completeness. A vaccine involves being exposed to a variation of a pathogen that will not actually harm you. That then stimulates your immune system into developing resistance to a harmful variation. The history of modern vaccines is rooted in an observation that people exposed to cowpox appeared to be immune to smallpox. Edward Jenner famously kickstarted its usage as a medical intervention by proving that it really did work and that exposure to cowpox granted immunity to smallpox.

So here is a question.

Is it possible to do something similar in the context of Fake News?

Apparently yes.  Within psychological circles the concept is known as inoculation theory and dates back to the 1960s.

John Cook, a psychologist researching misinformation at the Center for Climate Change Communication, George Mason University, and also the driving force behind the popular website skepticalscience (no not this one, the better one), writes about this as follows …

I’ve tried exposing people to a weak form of misinformation in order to inoculate them against the real thing – with promising results.

In my recently published research, I also tested inoculation but with a different approach. While I inoculated participants against the Petition Project, I didn’t mention it at all. Instead, I talked about the misinformation technique of using “fake experts” – people who convey the impression of expertise to the general public but having no actual relevant expertise.

Now that is both fascinating and also encouraging.

There are better answers than filtering

When thinking about the strategies we could use to fight against fake news then often the answer many will come up with is to simply censor the flow of information by filtering stuff out that comes from dubious sources. This thinking applies specifically to social media platforms, but beyond that we also need to contend with right-wing propaganda channels such as Fox News or news sources such as Breitbart that are politically motivated to quite literally promote fiction as fact, and dismiss fact as fiction in order to manipulate.

If you seriously doubt that this actually happens, then remember that there are literally millions of people who embrace various religious beliefs that have exactly zero credible evidence to verify them, yet at the same time dismiss climate change as a myth despite the observation that more than 97% of climate scientists accept that this is happening because of the mountains of evidence.

Simply filtering the nonsense is not enough, and can never be sufficient; there needs to be a better answer. The good news is that there really is.

We know that if you combine fact with myth and present them both, they appear to cancel each other out …

Beyond misinforming people, misinformation has a more insidious and dangerous influence. In the van der Linden study, when people were presented with both the facts and misinformation about climate change, there was no net change in belief. The two conflicting pieces of information canceled each other out.

Fact and “alternative fact” are like matter and antimatter. When they collide, there’s a burst of heat followed by nothing. This reveals the subtle way that misinformation does damage. It doesn’t just misinform. It stops people believing in facts. Or as Garry Kasporov eloquently puts it, misinformation “annihilates truth.”

In other words, if you present a myth and then proceed to lay out the facts …. nothing happens, people don’t alter their beliefs.

You can try this yourself. Simple engage somebody who believes in something weird … 9/11, flat earth, false flag shootings, creationism, etc… and present them with the facts. The facts will of course manage to persuade them and so each and every time, they will slap their hand against their head and exclaim “well gosh, you are right, I was being quite stupid“. That happens every time … oh wait, that’s not how it plays out at all.

So what does work?

John has been running a free online course about climate misinformation, Making Sense of Climate Science Denial. In this he took an approach that involved using a Fact-Myth-Fallacy approach.

This is where he explains a climate fact, then introduced a related climate myth and explained the problem (the fallacy) with the myth. To put that another way, while teaching students climate science facts, they also inoculated them against climate denial myths.

Let’s illustrate that with an example …

we know we are causing global warming because we observe many patterns in climate change unique to greenhouse warming. In other words, human fingerprints are observed all over our climate. However, one myth argues that climate has changed naturally in the past before humans; therefore, what’s happening now must be natural also. This myth commits the fallacy of jumping to conclusions (or non sequitur), where the premise does not lead to the conclusion. It’s like finding a dead body with a knife poking out of its back and arguing that people have died of natural causes in the past, so this death must have been of natural causes also.

Articulating facts is not enough. We can’t deny the existence of science denial. While emphasising a fact, we need to also articulate the misconceptions and then articulate the problem with them. 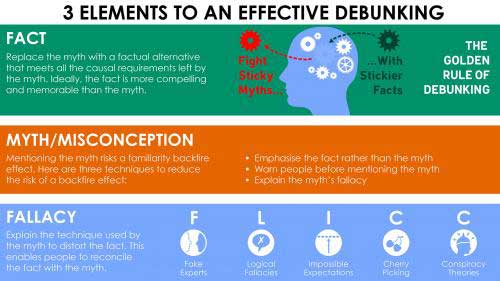 To finish with another example, Darwin himself did something like this. He did not simply lay out the evidence, he also addresses the rebuttals. Within chapter six of On The Origin of Species, he famously wrote …

To suppose that the eye with all its inimitable contrivances for adjusting the focus to different distances, for admitting different amounts of light, and for the correction of spherical and chromatic aberration, could have been formed by natural selection, seems, I freely confess, absurd in the highest degree…

He then goes on to explain why this is not correct.

Some Creationists love to quote that in isolation out of context as “evidence” that Darwin himself doubted natural selection. They are simply dishonestly quote-mining in order to manipulate, and that tells you a great deal about their actual integrity and honesty.