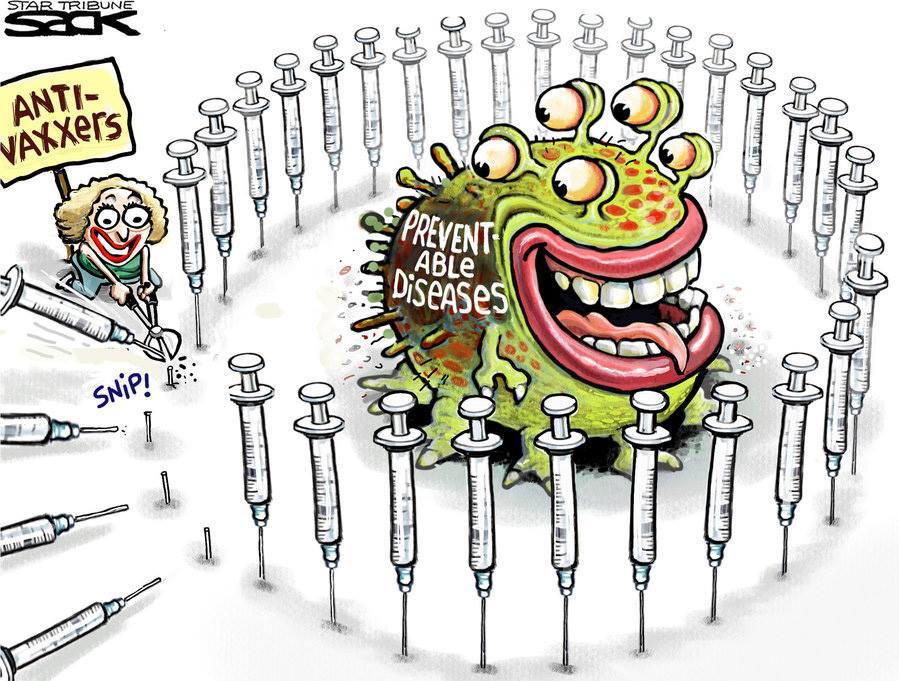 A couple of days ago Newsweek published a fabulous article titled “9 ANTI-VAXXER MYTHS DEBUNKED“. There they proceed to demolish these 9 myths …

I applaud them, I truly do. All of the above ideas are promoted by the anti-vaccine brigade, and non of them are true at all. The layout is also very good, take for example just one of them, the first. Here they expose you to the myth, then in effect immunise you against it …

Where the myth comes from: One of the most prominent claims of anti-vaxxers is that vaccines are linked to autism: A child on the autistic spectrum can be diagnosed as young as 12 to 18 months—around the same time the measles, mumps and rubella (MMR) vaccine is administered—leading some parents to assume a causal relationship. Most prominently, British gastroenterologist Andrew Wakefield published a shocking study in The Lancet in 1998 linking the MMR vaccine to autism and bowel disease.

The link between autism and vaccines is repeated often, including by celebrities like Jenny McCarthy, who told Oprah in 2007 that vaccines triggered her son’s autism, and President Donald Trump, who claimed in 2015 that after getting vaccinated, a child “got a tremendous fever, got very, very sick, [and] now is autistic.”  A 2015 Pew poll found that one in ten parents believe the MMR vaccine is unsafe.

The facts: In 2004, the Sunday Times reported on financial conflicts of interest by Wakefield, who was allegedly planning to launch a company that would profit from the boom in medical tests and lawsuits that would follow his report. After it appeared his research was fraudulent Wakefield’s co-authors withdrew their support and his stuy was retracted by The Lancet. “The statements in the paper were utterly false,” editor Richard Horton told The Guardian, “I feel I was deceived.”

In 2009, a British administrative court ruled that “there is now no respectable body of opinion which supports the hypothesis, that MMR vaccine and autism and enterocolitis [a devastating intestinal disease affecting premature infants] are causally linked.” Wakefield’s medical license was revoked a year later.

Is what they are telling you True?

Yes it all is, you can verify this yourself. While the Newsweek article has no links, and that is perhaps a reflection of them being print media, the information is all out there.

If you are still struggling, there here are three solid facts …

The reality today is that the anti-vaccine movement thrives and as a result people are dying. These utterly ignorant lunatics have a growing body count.

…For the first time, the World Health Organization listed vaccine hesitancy as one of the top 10 global threats of 2019.

…Nearly 1,000 people, mostly children, have died of the illness in Madagascar this year, according to the WHO, offering a window into how rapidly the disease can devastate a country with low vaccination rates.

In Europe, measles cases are at a 20-year high, with 60,000 cases and 72 deaths. A quarter of those are in Italy, where anti-vaccine groups allied with populist politicians won passage last year of a law to end compulsory vaccines — a law repealed a short time later…

Social Media is playing a Role

Why is it now like this, what is going on?

Once again we are right back to the myth-information bubbles that people fall into on Social Media. After viewing one anti-vaccine clip, the algorithms select more of the same and keep on doing so. Exposed to clip after clip after clip of utter fiction presented as fact and no exposure at all to the fact-based rebuttals, convinces some to be concerned about vaccines and so deeply invest emotionally in the mythology.

While Flat Earth believers might be deemed to be harmless cranks, the anti-vaccine movement is a serious threat to public health, hence some of the social media platforms are starting to respond. But why have they acted on this issue?

Here is what has just happened.

The video-sharing site said it took the step because many of the anti-vaccine channels were promoting “harmful or dangerous ” views.

“Any misinformation on medical topics is especially concerning,” it said in a statement.

Alongside the decision to remove ads, it said it was also trying to make “more authoritative content” easier to find on the benefits of vaccination and was also stopping anti-vaccine videos appearing in recommendation lists.

It was also planning to create “information panels” on pages that listed sources where people can fact-check information for themselves.

It said: “Like many algorithmic changes, these efforts will be gradual and will get more and more accurate over time.”

That’s rather an unusual step for them to take, so back to my question, why did they act?

BuzzFeed reporting on 22nd February has the details. It is a response triggered by an advertiser revolt …

… Nomad Health, a health tech company, told BuzzFeed News that it “does not support the anti-vaccination movement,” was “not aware of our ads running alongside anti-vaccination videos,” and would “take action to prevent it from happening in the future.”…

…“We will continue to remain off of the platform until those changes are made and are proven to be effective by other advertisers,” the Vitacost spokesperson said…

… “Upon learning of this, we immediately contacted YouTube to pull our ads from appearing not only on this channel but also to ensure related content that promulgates conspiracy theories is completely excluded,” said a spokesperson for Grammarly, a writing software company. “We have stringent exclusion filters in place with YouTube that we believed would exclude such channels. We’ve asked YouTube to ensure this does not happen again.”…

This has forced YouTube to take meaningful decisive action and to stop promoting utter crap. They have not acted out of the goodness of their hearts, but instead have responded to stem a financial impact.

Pinterest has blocked all searches on vaccinations to stop the spread of misinformation.

There has also been a political response

Following a measles outbreak, US Rep. Adam Schiff demanded last week that Facebook and Google, which owns YouTube, address the risks of the spread of medical misinformation about vaccines on their platforms. Facebook responded last week by saying it would take “steps to reduce the distribution of health-related misinformation on Facebook.”

Nothing about any of this a storm in a teacup. It is a very serious issue.

She had tried to get them vaccinated at her local clinic well before they became sick, but there were no vaccines to be had, she told CNN.

The epidemic has been particularly devastating for infants. Babies aged nine months and below account for 84 per cent of the deaths confirmed so far. Nearly all the rest of the mortalities have been of school-going children.

Madagascar’s epidemic is a warning of what could happen elsewhere, even in the rich world, if measles vaccinations rates do not rise. Global coverage has stalled at 85 per cent in recent years, well short of herd-protection levels. …

… Measles, which once killed 2.6m people a year before a vaccine developed in the 1960s began to make a difference, is again on the rise….