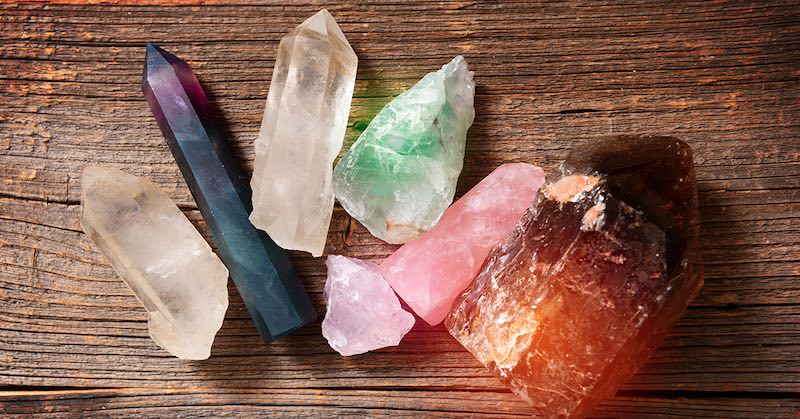 Often when faced with some pseudoscientific stuff that appears to be benign, it can be very tempting to think “Well, what is the harm“. Only later do we discover that it comes with a heavy price, one that has a considerably negative impact. One such example concerns the rising popularity of Healing Crystals. The Guardian recently ran an article titled “Dark crystals: the brutal reality behind a booming wellness craze” that reveals the true human cost.

We will get to that in a bit, but first let’s cover the basics.

The claim is that crystals such as quartz, amethyst or opals have healing powers.

There is no evidence that this is true, and there is no consistency to the claim, different practitioners will often vary the claims associated with specific crystals.

Has anybody ever tested the claim?

Well-known skeptic Christopher French, head of the anomalistic psychology research unit at the University of London, conducted a proper clinical test back in 2001.

They had 80 participants. Each was asked to meditate for five minutes while holding either a real quartz crystal or a fake crystal that they believed was real. Half were also primed to notice things such as a tingling in the body or a warmth in the hand holding the crystal.

Their conclusion was this …

“There is no evidence that crystal healing works over and above a placebo effect. That is the appropriate standard to judge any form of treatment. But whether or not you judge crystal healing, or any other form of [complementary and alternative medicine], to be totally worthless depends upon your attitude to placebo effects.”

In other words, if you believe, or have been psychology primed to expect something, then you might indeed feel something, but nothing actually happens.

If crystals don’t actually do anything at all, except perhaps at best to make those that believe feel a bit better, then what possible harm does this do, why not simply let the people who believe in this carry on?

Apart from the rather obvious observation that people are being conned into believing things that are not actually true, and being fraudulently sold a supposed cure that does not actually do anything at all, there is a far darker more sinister twist to all of this that a recent Guardian article highlights.

Crystals are growing in popularity. For example there was a recent Tucson gem show that involved 4,000 crystal, mineral and gemstone vendors selling to 50,000 customers. It is the new craze …

…Five years ago, crystals were not a big deal. Now, powered by the lucrative combination of social media-friendly aesthetics, cosmic spirituality and the apparently unstoppable wellness juggernaut, they have gone from a niche oddity associated with patchouli and crushed velvet to a global consumer phenomenon. On Instagram, hashtags for #crystals and #healingcrystals tick into the tens of millions. In 2017, the New York Times heralded “the great crystal boom” and in 2018 Hello! described them as the year’s biggest health and wellness trend….

There is now a market for literally tens of thousands of tonnes of crystals, but where do they all come from?

This is the unexpected twist.

To meet this gem demand nations such as India, Brazil and Madagascar step up to the mark. The focus of the Guardian article is what this growing demand is doing in Madagascar.

Without any permits or experience, impoverished people simply dig for such gems in the hope of earning a few dollars. They get paid almost nothing – 23¢ a kilo if it is good, or 17¢ for lower grade. The net effect is a human cost. Child labour, horrific conditions, and many deaths.

As described by the article here is what is happening …

Between the buyers in the US and the mines in Madagascar was a gulf of experience, which, sitting in the courtyard of Liva Marc’s small factory, he found hard to express. “It’s like two galaxies,” he said, grinning and shaking his head. “It’s a big difference. If I say to people at the mine what Tuscon is like, they will never understand. And if I say to the Tucson people to come here, they will never understand. It’s very different worlds.”

He acknowledged the poor conditions at the mines he bought from. “You were shocked, but I was shocked, too! When you see in the rough, [stones weighing] like 50kg, 60kg, they drag it four, five kilometres, two or three per day, and earning only $1? You know, it’s … ” He paused. “Sometimes you can’t imagine how they can do this.”…

Ethically Sourced Claims that are fraudulent

The Guardian article also goes on to highlight how companies such as Glacce sells water bottles and metal straws embedded with rose quartz, but it is all a scam …

Julia Schoen, co-founder of the crystal drink bottle company Glacce (tagline “Luxury Spiritual”) told me that ethical sourcing is “the No 1 priority” for her company. Schoen was speaking on the phone from her office in New Orleans, where she told me she was surrounded by crystals that had been unboxed and laid out, waiting to be blessed by staff, who would burn sage smudge sticks and pray to cleanse them before use.

Glacce sells water bottles and metal straws embedded with rose quartz, amethyst and other crystals, which are supposed to transform ordinary water into a “crystal elixir”, where the water takes on the healing properties of the crystal. The bottles were touted by Vanity Fair as “2018’s Status Symbol” and are sold by bohemian-themed fashion retailer Free People, as well as Goop. Schoen said sales of the bottles, which retail for $60-$100, had increased exponentially since they started the business, and demand often outstripped supply.

But even with a booming market, she said, the company didn’t yet have a budget to track their crystals to their source at the mines. Instead, Glacce depended on Chinese middlemen to select crystals, including those from Madagascar.

Feeding the demand has a human cost

The article is a long read, and so to truly grasp the scope of what is happening, I’d recommend reading it all, because there is far more than just the bits I have touched on above.

The Bottom line is this, not only is the healing claim itself utterly fraudulent, but the rising demand that is being driven by those that do believe comes at a horrendous human cost. None of those buying or selling would ever dream of trafficking blood diamonds, but fail to appreciate that the Dark Crystals market that they happily embrace and turn a blind eye to is not really much different.