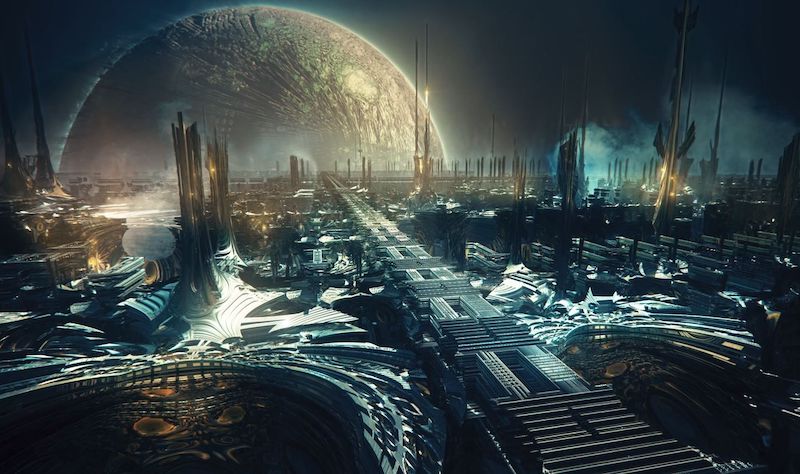 You will no doubt have seen the various recent media stories regarding the claim that there are at least 36 Intelligent Alien Civilisations In Our Galaxy. This comes across as something that on a normal day hails from the tabloid end of the market (“I was kidnapped by aliens“). What makes this alien claim interesting is that the more serious end of the media is running with it. For example on June 15, 2020 we get these stories …

So what is the story here behind this story, is there a solid basis for this claim regarding other alien civilisations?

Published within the serious Peer Reviewed journal, The Astrophysical Journal, on June 15, 2020 along with a press release, we have the above paper.

The press release from Nottingham University in the UK, is titled “Research sheds new light on intelligent life existing across the Galaxy“

What exactly have they researched, what data do they have?

It is all speculation.

They started with an assumption that intelligent life forms on other planets in a manner that is similar to Earth. Using that speculation as their foundation, they then came up with an estimate for the number of intelligent communicating civilisations within our own galaxy -the Milky Way.

The assumption is based upon the one solid data point we have – us. So they have assumed that it takes 5 billion years for intelligent life to form on other planets, as it did on Earth.

Once they had that assumption, they could then use what is known about the Galaxy …

Yep, that last one is yet another bit of speculation that has been built upon the initial assumption. We do know that there are roughly 100 to 400 billion stars in our Galaxy, and so they have also assumed one exoplanet per star. That is perhaps reasonable given our current exoplanet observations.

Alien Civilisations – Comments by the Researchers

Professor of Astrophysics at the University of Nottingham, Christopher Conselice who led the research, explains:

“There should be at least a few dozen active civilizations in our Galaxy under the assumption that it takes 5 billion years for intelligent life to form on other planets, as on Earth.”   Conselice also explains that, “The idea is looking at evolution, but on a cosmic scale. We call this calculation the Astrobiological Copernican Limit.”

“The classic method for estimating the number of intelligent civilizations relies on making guesses of values relating to life, whereby opinions about such matters vary quite substantially. Our new study simplifies these assumptions using new data, giving us a solid estimate of the number of civilizations in our Galaxy.

The two Astrobiological Copernican limits are that intelligent life forms in less than 5 billion years, or after about 5 billion years – similar to on Earth where a communicating civilization formed after 4.5 billion years. In the strong criteria, whereby a metal content equal to that of the Sun is needed (the Sun is relatively speaking quite metal rich), we calculate that there should be around 36 active civilizations in our Galaxy.”

I did indeed choke a bit upon the claim that previous methods only made guesses, but they have a “solid estimate”. They have also made rather a lot of speculation and have not really brought us any closer to actually knowing.

Within the Research paper itself

Not too far in we find this …

This issue is of monumental importance and interest to humanity but has of yet no answer, or even good guesses.

I would seriously argue that this observation remains true even with the publication of this paper.

What exactly is their thinking here?

In their own words from the paper (emphases is mine)…

We start with a revision of the Drake equation, and we make a key assumption: since the time required for the development of communicative intelligent civilization on our own planet is of the order of 5 Gyr, then we propose that life will have a reasonable probability of forming on another planet such as the Earth in the habitable zone (HZ) of a suitable star within our Galaxy in a similar amount of time. This idea has not been confirmed but is worth exploring as on Earth we see many examples of convergent evolution, and life may in principle arise in a similar manner on a different planet. In this paper we re-examine the likely occurrence rate of CETI, under two different assumptions. The first, which we call the Weak Astrobiological Copernican scenario, is that intelligent life can only form on an Earth-like planet in a HZ after the star is at least 5 Gyr old, which mimics the amount of time it has taken to form such life on Earth (Dalrymple 2001); however, intelligent life can form any time after 5 Gyr. In practice, this limit is not a very strong constraint as we find that most stars in the Galaxy are older than this. The other situation we investigate, called the Strong Astrobiological Copernican scenario, is that intelligent life forms around stars exactly on the same timescale as on Earth: between 4.5 and 5.5 Gyr after formation. We investigate both scenarios using the star formation history of our Galaxy, knowledge of stellar lifetimes and the properties of planets derived from the Kepler mission (NASA), in order to determine how many stars in our Galaxy have the appropriate age to allow for the development of CETI.

They do also mull over things as follows …

The lifetime of civilizations in our Galaxy is a big unknown within this and is by far the most important factor in the CETI equation we develop, as it was for the Drake equation.

Extinction events are very hard to predict, but they do seem to occur on Earth on a regular basis throughout geological time, due to events such as asteroid collisions. For example, a massive extinction event occurred for dinosaurs after they had existed for 350 million years, but—of course—they were not a communicating intelligence. Part of the issue with our thinking about the lifetime of CETI is that it may be argued (rightly or wrongly) that a civilization’s self-destruction is more likely to occur than a natural extinction. Perhaps the key aspect of intelligent life, at least as we know it, is the ability to self-destroy. As far as we can tell, when a civilization develops the technology to communicate over large distances it also has the technology to destroy itself and this is unfortunately likely universal. On Earth, two immediately obvious possibilities are destruction by weapons and through climate change creating an uninhabitable environment. There is, however, another factor that we do not consider here: namely, that the lifetime of an average CETI may be much longer due to space travel, with civilizations moving off one planet and onto another. This is of course a very difficult thing to do and has not yet been achieved by humans. This would, of course, require that the lifetime of a civilization is long enough such that that event could occur before self-destruction.

Our results also relate in some ways to the so-called Fermi Paradox (i.e., the supposedly surprising failure to detect evidence of extraterrestrial intelligence after decades of searching) which is often used as an argument against the possibility of the existence of CETI.

We carry out this calculation using the reasonable assumption that life on other planets within the Galaxy develops in broadly similar ways in terms of timescales to life on Earth, although we allow for a range of host star properties and masses.

... the major problem with any speculative analysis of this time has to do with our overwhelming lack of solid evidence for life of a separate lineage to that of the Earth, and the basic premise of suggesting methods of extending our knowledge as to the temporal and spatial distribution of intelligence, based on the single data point that is current available, is indeed a matter for debate. …

… If we do not find intelligent life within approximately 7000 lt-yr it would indicate one of two things. The first is that the lifetime of civilizations is much shorter than 2000 yr, implying that our own may be quite short-lived. The second is that life on Earth is unique, and intelligent life does not automatically form after 5 Gyr on a suitable planet but is a more random process.

There are two possibilities

This is a binary choice and there are only two possibilities here. Both are equally frightening to some degree.

Either way, the only certainty is that we simply don’t know.

The paper is just speculation built upon a foundation of assumptions and guesses. It is of course interesting, but no matter how hard we might wish for something different, it is still just speculation.