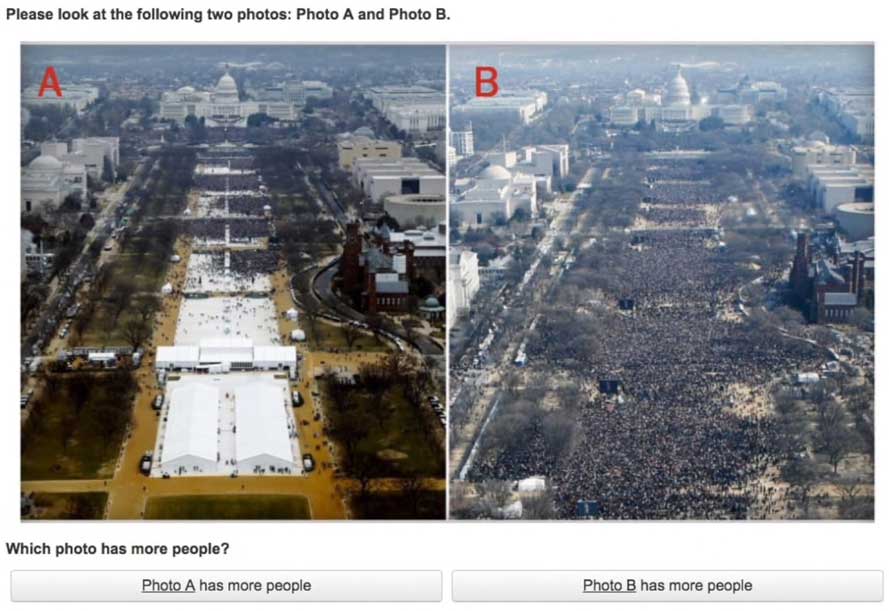 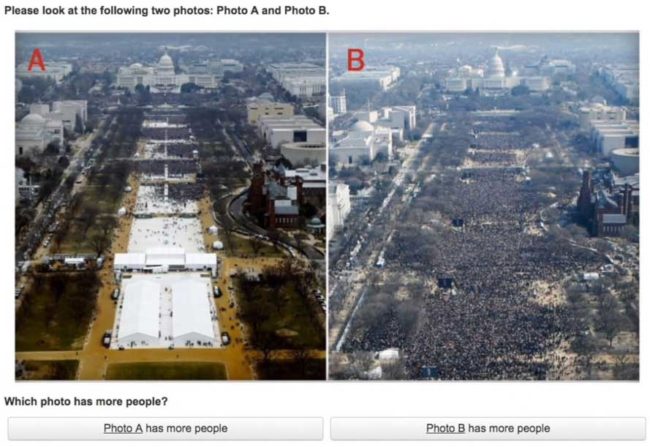 Above are two pictures. One is labelled A and the other is labelled B. Please select the picture that has the largest crowd. Both are of course images of an inauguration crowd, so I think you can see what is actually being asked. People are being confronted with facts and are being asked to pick either reality or a myth. For most this should not be a difficult choice, and yet apparently it is.

The correct answer is blindly obvious so nobody should even struggle with this … right?

The context of all this is the claim issued by White House press secretary Sean Spicer at a formal press conference. There he explained that “this was the largest audience to ever witness an inauguration — period — both in person and around the globe.” on 21st January, and also of course this same claim was made by the idiot-in-chief himself.

I was listening to a talk by Pulitzer Prize winning investigative journalist James Ball last weekend at QED and this is one of the examples he quoted.

What actually happened when the above question was posed in a formal poll?

The result he talked about sounded so bizarre that I just had to go check it out and see how accurate his description was. It turns out to have been spot on and not in any way an exaggeration.

On 25th January 2017, just five days after the Trump inauguration, the Washington Post ran the results of a poll they did. They explained it as follows …

If the past is any guide, we would expect that Trump supporters would be more likely to claim that the picture with the larger crowd was the one from Trump’s inauguration, as doing so would express and reinforce their support for him. Further, as some respondents had never seen these photos, uncertainty regarding the answer would likely lead them to choose the photograph that would be most in line with their partisan loyalties.

Would some people be willing to make a clearly false statement when looking directly at photographic evidence — simply to support the Trump administration’s claims?

I think by now you know exactly where this is going and can anticipate what happened, and so yes, what happened is indeed confirmation of just how far some are willing to leap in order to retain a specific political belief.

The poll itself was formally run by YouGov, a polling organisation with a robust reputation, so it was no self-selected Washington Post reader poll, it truly was properly run.

This is the percentage of people who got the answer wrong 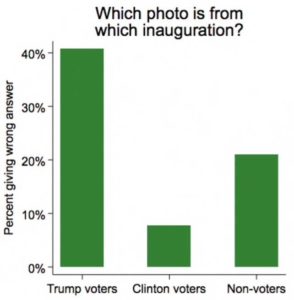 Which photo has more people?

This is the percentage of people who got the rather glaringly obvious answer wrong. 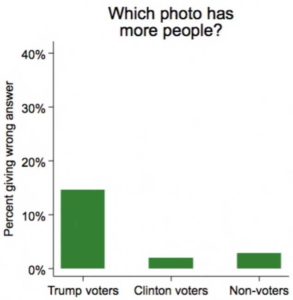 Crowd Size tells you nothing of any significance

A rather important point to remember is that this is not actually telling you anything at all. Washington DC and surrounding states is very much Democrat.

The observation that a larger crowd turned up for the inauguration of Democratic candidate is simply a reflection of it being a lot easier for Democratic supporters to get there.

This entire “My crowd is bigger than yours” is pure political theatre and not an actual measurement of anything meaningful at all.

The Poll result is quite frankly fascinating

When faced with a glaringly obvious smaller crowd size in picture A, as many as 15% of Trump supporters still opted to select it as the largest crowd.

An interesting thought to ponder over is to wonder if those people actually believe the answer they have given.

What is possible is that those answering the question wrongly are not taking the question at face value, but instead they have opted to express an answer that simply reflects their support for Trump. So is this the real answer to what happened within the poll?

The answer perhaps comes via a team of researchers who tested responses to such politically charged surveys back in 2015 to see if they could gain a better insight into political bias. They presented people which stark politically loaded questions, but also introduced a motivation to answer correctly. This is what happened …

What remains unclear is whether such patterns reflect differing beliefs among partisans or instead reflect a desire to praise one party or criticize another. To shed light on this question, we present a model of survey response in the presence of partisan cheerleading and payments for correct and “don’t know” responses. We design two experiments based on the model’s implications. The experiments show that small payments for correct and “don’t know” answers sharply diminish the gap between Democrats and Republicans in responses to “partisan” factual questions. Our conclusion is that the apparent gulf in factual beliefs between members of different parties may be more illusory than real.

It might indeed be tempting to consider “them” to be stupid, and to latch on to such a denial of reality as irrefutable proof that this is so, but the truth may in reality be quite different. We embrace specific tribal membership at a deep emotional level, and so when challenged we will often let that tribal loyalty override everything else.

Faced with a question that just asked about a crowd size, people responded to it as if the question was really asking “Do you support Trump?”, and so they answered it that way. Yes obviously A is a smaller crowd, and for those answering that B was smaller, what they were saying is not that B is actually a smaller crowd, but instead they were saying that they would not be tricked into taking a stance against the candidate that they had emotionally bonded with.

Humans are complex, and often what appears to be daft on the surface is simply a reflection of the deep hidden emotional undercurrents that are swirling away beneath the surface.

2 thoughts on “Abandoning Reality: why was there inauguration crowd size denial?”