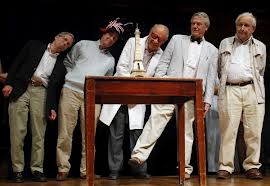 Now least you are wondering, “What the heck are Ig Nobel prizes?”, I better explain.These  honor achievements that first make people laugh, and then make them think. The prizes are intended to celebrate the unusual, honor the imaginative — and spur people’s interest in science, medicine, and technology. Every year, in a gala ceremony in Harvard’s Sanders Theatre, 1200 splendidly eccentric spectators watch the winners step forward to accept their Prizes. These are physically handed out by genuinely bemused genuine Nobel laureates. An article in Nature explains …

The Ig Nobel awards are arguably the highlight of the scientific calendar. The prizes, which are the wayward son of the more righteous Nobels, are supposed to reward research that makes people laugh, then think. They are a welcome antidote to the everyday seriousness and stuffiness of life in the lab, providing a run down of mildly amusing, and sometimes frankly ridiculous, science.

OK, so who won in 2012, and what did they do to get the prize (Oh, come on now, you know this is going to be both amusing and entertaining) … here are the details …they got to collect their prises last Thursday (20th Sept) at the official ceremony. I nicked the following off their web-site and inserted a few references and comments for you …

PSYCHOLOGY PRIZE: Anita Eerland and Rolf Zwaan [THE NETHERLANDS] and Tulio Guadalupe [PERU, RUSSIA, and THE NETHERLANDS] for their study “Leaning to the Left Makes the Eiffel Tower Seem Smaller”

ATTENDING THE CEREMONY: Tulio Guadalupe. [NOTE: Two days after the ceremony, Anita Eerland and Rolf Zwaan will marry each other, in the Netherlands.] – That’s today

Personally, I’d be damn wary of the ones that glow in the dark. You can find out more about their Nano-diamond (ND) product here.

ACOUSTICS PRIZE: Kazutaka Kurihara and Koji Tsukada [JAPAN] for creating the SpeechJammer — a machine that disrupts a person’s speech, by making them hear their own spoken words at a very slight delay.

Hey, I need one of these.

Yes really, they hooked up a dead salmon to an fMRI scanner and measured brain activity. Zombie fish? Nope, just an illustration that demonstrates the danger of not correcting for chance properly. If you do not know what you are doing it is very easy to fool yourself.

Wait, sorry, hang on a moment, what was that last journal again, is that a real Journal? … apparently yes now that is indeed a goddamned cool scholarly venture.

CHEMISTRY PRIZE: Johan Pettersson [SWEDEN and RWANDA]. for solving the puzzle of why, in certain houses in the town of Anderslöv, Sweden, people’s hair turned green.

Story here is that in some new homes the hot water left overnight peeled copper from the pipes and water heaters into the water and so those that then had a hot shower ended up with green hair because the water was an effective hair dye.

ATTENDING THE THE CEREMONY: Johan Pettersson

What makes this truly funny is that somebody was actually daft enough to write this.

REFERENCE: “Actions Needed to Evaluate the Impact of Efforts to Estimate Costs of Reports and Studies,” US Government General Accountability Office report GAO-12-480R, May 10, 2012.

PHYSICS PRIZE: Joseph Keller [USA], and Raymond Goldstein [USA and UK], Patrick Warren, and Robin Ball [UK], for calculating the balance of forces that shape and move the hair in a human ponytail.

This is how to make Physics interesting for the 8 year old demographic.

FLUID DYNAMICS PRIZE: Rouslan Krechetnikov [USA, RUSSIA, CANADA] and Hans Mayer [USA] for studying the dynamics of liquid-sloshing, to learn what happens when a person walks while carrying a cup of coffee.

And so another of the deep mysteries of the universe has been cracked.

ANATOMY PRIZE: Frans de Waal [The Netherlands and USA] and Jennifer Pokorny [USA] for discovering that chimpanzees can identify other chimpanzees individually from seeing photographs of their rear ends.

So, are they talking out of their arses?

MEDICINE PRIZE: Emmanuel Ben-Soussan and Michel Antonietti [FRANCE] for advising doctors who perform colonoscopies how to minimize the chance that their patients will explode.

Really!! … they need to actually consider this? … I’m not sure I wanted to know.

ATTENDING THE THE CEREMONY: Emmanuel Ben-Soussan

SPECIAL ANNOUNCEMENT: We are now, in 2012, correcting an error we made in the year 1999, when we failed to include one winner’s name. We now correct that, awarding a share of the 1999 physics prize to Joseph Keller. Professor Keller is also a co-winner of the 2012 Ig Nobel physics prize, making him a two-time Ig Nobel winner. The corrected citation is: 1999

PHYSICS PRIZE: Len Fisher [UK and Australia] for calculating the optimal way to dunk a biscuit, and Jean-Marc Vanden-Broeck [UK and Belgium] and Joseph Keller [USA], for calculating how to make a teapot spout that does not drip.

Oh yes, and let us not forget that the Ig Nobel folks found a great way to motivate speakers accepting their prizes to stick to their allocated time limit … here are the details … (enjoy) …