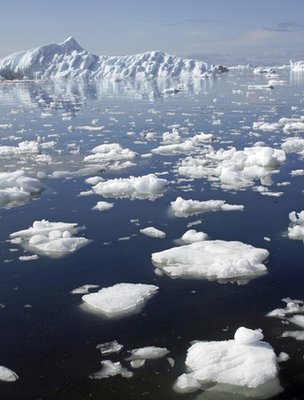 Here are a few scary facts for you …

The primary reason for the large loss of ice this summer is that the ice cover has continued to thin and become more dominated by seasonal ice. This thinner ice was more prone to be broken up and melted by weather events, and we had such an event. There was a very strong storm centered over the central Arctic Ocean in early August. 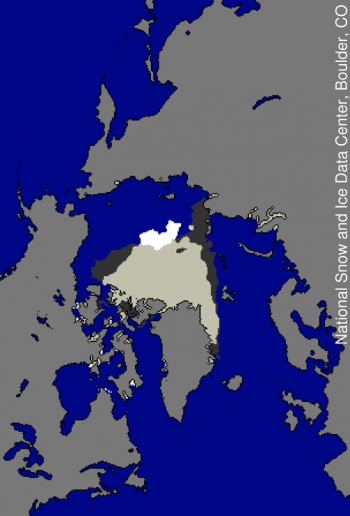 There is nothing better than a picture to show you what has been going on. OK, so take a look on the picture on the left.

But that is all very far away, nobody actually lives up there, so does any of this really matter? In fact it makes trade a lot easier, with no ice in the summer, shipping routes open up, and we also get access so that we can drill for oil.

A 2011 study published in Nature journal, used proxies such as ice cores and lake sediments to reconstruct sea ice extent in the Arctic over the last 1,450 years. The results suggest the duration and magnitude of the current decline in sea ice may be unprecedented over this period. In other words, the Arctic may have entered a new climate era.

Dr Julienne Stroeve, a research scientist with the NSIDC, advises …

“The loss of summer sea ice has led to unusual warming of the Arctic atmosphere, that in turn impacts weather patterns in the Northern Hemisphere, that can result in persistent extreme weather such as droughts, heat waves and flooding.”

Dr Poul Christoffersen, from the University of Cambridge, told the BBC …

“We know very little about the consequences of drastic sea ice reductions.

“Most model predictions have sea ice declining less fast. But the fact is that less sea ice means more heat going into the upper ocean and the lower atmosphere. There could be some large scale effects from this, such as shifting wind patterns, surface ocean currents and potentially the jet stream.

“The wet northern European summer of 2012 could very well have been influenced by the record low extent of sea ice in the Arctic.”

Here is some more data for you to mull over … 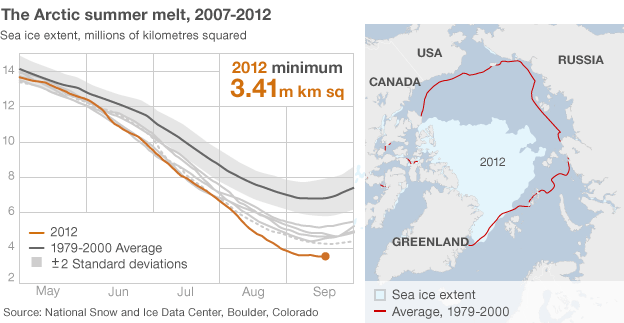 Are you are tempted to think that it is time to start getting serious about this? Well it is not, we passed that point several decades ago.