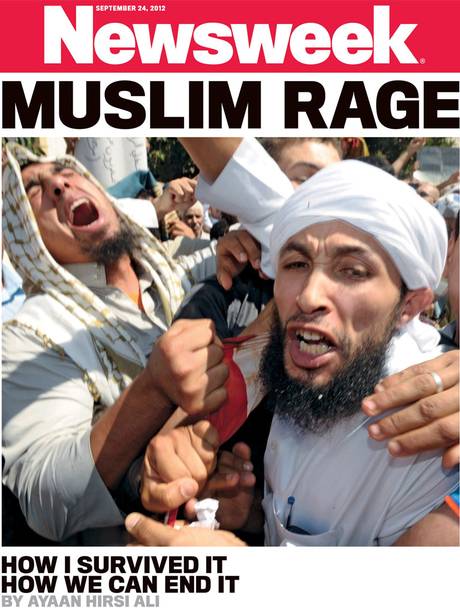 How Honest and accurate is the Newsweek cover?

There is of course some very valid criticism to be had here (I’ll come to that), but first lets take a look at the rather popular media portrayal of the entire Islamic Universe being up in arms and out rioting in reply to one daft movie.

Take the Newsweek front cover image … you see bearded Middle-Eastern chaps wearing turbans, howling, and shaking their fists,. It ticks every stereotypical racist image that prevails. The caption “Muslim Rage” leads you to make an assumption. Now, take a second look and consider, how do we know what this really is? It could just as easily be two blokes howling in anguish as they watch the opposing team score a goal against their team.

OK, I can hear you screaming, “You know what has been going on, this simply represents that“. Well, that is my point, I’m suggesting that it does not. Yes there have been riots, and yes people have died, but have all 1.6 Billion Muslims been out on the streets doing so, or is it really only the lunatic minority. Who exactly elected them to represent all those that have no interest in rioting over nonsense?

A second problem here is that Newsweek does have a reputation for image manipulation. For example, the covers showing a digitally manipulated Princess Diana “at 50”, Barack Obama with a rainbow-coloured halo as “America’s First Gay President”, and a woman eating asparagus in a sexually provocative manner. You believed all that as 100% factually accurate … right? Well, that is my point.

I’m not attempting to defend Islam, nor am I attempting to justify or defend the riots either (I’ll come to that), but first lets get things back into a real-world embrace of a more honest understanding of what is actually going on.

So how has the Islamic community responded? Well, Newsweek asked readers to tweet under the hashtag #muslimrage, and many Muslims did exactly that. They uploaded snaps of family picnics, children holding balloons and other non-aggressive scenarios. Some also tweeted sarcastic examples of things that actually made them angry, such as “when there isn’t enough yogurt to go with my biryani“. However, none of them, not one, stormed the Newsweek offices or rioted outside.

The reality here is that only a tiny minority have generated all the headlines, the majority have acted like decent honourable humans and quite rightly just ignored the daft film that started it all. The Gawker website has it about right in lampooning the Newsweek cover. They ran a series of pictures of smiling Muslim kids on a garden swing, canoodling in the park, doing handstands, swimming, all under the caption of “Muslim Rage“.

Here is a more representative view. In it you have Syed Mahmood explaining that the now infamous clip is a load of crap and that it was designed to simply stir up trouble. It is best to simply ignore it. His key point is that “being violent makes a success of the film“.

The problem is that images of religious nutters dancing around a fire and burning flags makes news, but the majority of Muslims ignoring all the fuss does not.

There is valid criticism that should indeed be deployed, but that criticism should be factually based and should not be grounded and built upon myths that are simply not true.

Free-speech does indeed matter, and speaking out about the real issues is vitally important. Within many Muslim societies there is open and often violent discrimination against people who hold different beliefs, have no belief, simply embrace a variation of Islam that is not the approved variation, or vilest of crimes, happen to be female. The real risk that we now run is an over-reaction to current events and a government sanctioned censoring of valid factually based criticism that must indeed be deployed against that ever so real and utterly tragic belief-driven insanity.