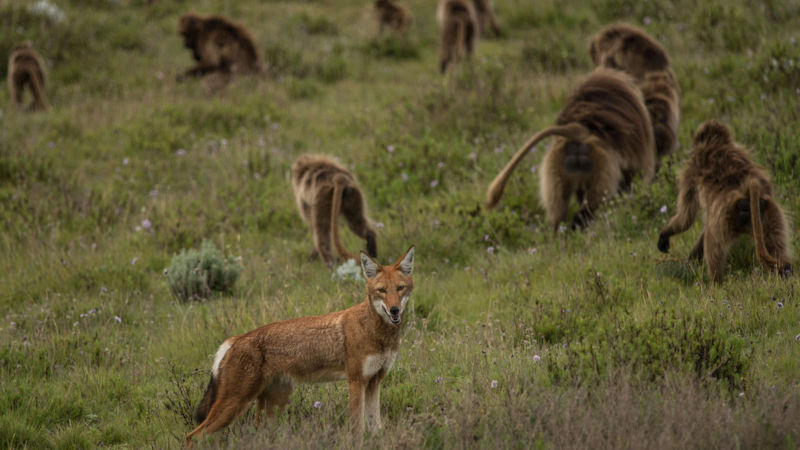 This has popped into the news recently, but actually goes back about three years to 2015. As an echo our our relationship with wolves roughly about 40,000 years ago a band of Monkeys were observed to be forging an alliance with some wolves in Ethiopia.

The inter-species relationship that is described is between the critically endangered Ethiopian wolf (Canis simensis) and a rare monkey species called the gelada (Theropithecus gelada). Given that the wolves eat meat and the Geladas are meat, their relationship is perhaps best described as tolerance.

The study was led by Vivek Venkataraman of Dartmouth college who observed wolves hunting for rodents amongst bands of the extremely rare geladas. They had no fear and so did not run away; for some reason the wolves also resisted the opportunity to treat the geladas as prey.

What is interesting is that it was specifically the wolves that were tolerated. When aggressive dogs arrives, the geladas would rapidly flee to safety.

Why did this Happen?

The study reveals that both species gained a distinct benefit from this relationship.

The wolves were far more successful at hunting rodents when looking for them in herds of geladas – the wolves succeeded in 66.7 percent of attempts among the gelada monkeys compared to a success rate of only 25 percent when the wolves hunted in areas where there were no geladas.

This greatly increased success rate may be attributed to the rodents being flushed out by the gelada herds. They would disturb the vegetation as they grazed, and also diminished the rodent ability to detect predators due to the visual or auditory interference posed by the grazing geladas.

How did the Wolves learn to not attack the Geladas?

The study contains the following observation …

It is intriguing that Ethiopian wolves do not opportunistically attack immature geladas. Young geladas are expected to be the most vulnerable members of the herd to opportunistic predation attempts, but in more than 8 years of study at Guassa, only 1 unsuccessful predation attempt by an Ethiopian wolf upon a (small juvenile) gelada has been documented. This episode resulted in dozens of geladas (mostly adult males) repeatedly mobbing the wolf, the wolf dropping the gelada unharmed from its mouth while running away.

Predation attempts by Ethiopian wolves thus appear to induce a mobbing response, resulting not only in a lost feeding opportunity and possible injury but also loss of the occasion to forage for rodents among the herd. The presence of large adult male geladas may play a fundamental role in shaping the restraint of Ethiopian wolves, which would further affirm the key role of body size differences in the dynamics of mixed-species associations involving predators and potential prey

So who has domesticated who here, have the wolves taught the monkeys that they are non-threatening to gain access to far better rodent hunting, or have the geladas modified wolf behaviour? The study suggests this …

Our data suggest that wolves may be foregoing foraging opportunities upon geladas in order to feed more effectively on rodents. By consistently exhibiting nonthreatening behavior, Ethiopian wolves may have habituated gelada herds to their presence

What benefit do the geladas derive?

It would appear that the wolves act as a defensive shield that keeps other predators away, but beyond that nothing else was observed …

The tolerance of the gelada herd toward foraging wolves may indicate that behavioral defenses such as heightened vigilance and awareness sufficiently reduce perceived predation risk by vulnerable geladas. Aside from the presumably minor energetic and physiological costs of such behaviors, there is no discernible cost or benefit to geladas from the presence of Ethiopian wolves, suggesting a commensal or weakly parasitic relationship between the species at Guassa.

Why is this fascinating?

Mixed-species associations involving predators and potential prey are rare. As explained by the study …

Primates frequently engage in mixed-species associations, typically with other primates, nonprimate mammals, and birds. Associations between primates and nonprimates are typically commensalistic, with the benefits accruing to the nonprimate rather than the primate, and typically involve antipredatory or foraging-related advantages. In the latter case, primate groups flush prey (i.e., insects) by disturbing vegetation and/or dropping fruits and leaves. Few observations of primates associating with their potential predators exist, and those that do typically involve small raptors. In mixed-species associations involving primates and terrestrial carnivores, the carnivore is typically engaging in facultative frugivory rather than predatory activity.

In many ways this is not simply about what is happing now, it is perhaps also a window into the origins of our relationship with other species as well.

Today we have pets, but how did that all start, how did we develop relationships with other species. It was perhaps something very much akin to this.