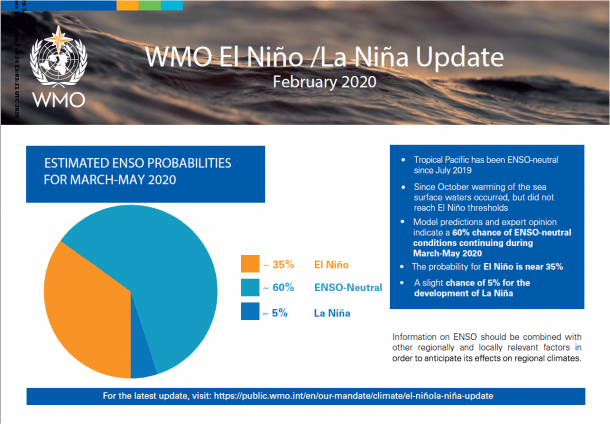 The World Meteorological Organization, the WMO, has published a forecast for the next few months. As expressed by the title of this posting, it is that above average temperatures are expected in many parts of the globe in the next few months, even without the presence of a warming El Niño event.

Yes, there are stories in the media that report this, but let’s skip those and jump directly into the WMO alpha source.

The essence of all this is that the WMO have published their El Niño / La Niña update. It is perhaps best to first explain what these terms actually refer to.

The El Niño–Southern Oscillation (ENSO) is a Walker Cell variation

A “Walker Cell” is a conceptual model of the air flow in the tropics. The circulation is caused by differences in heat distribution between ocean and land.

The Normal Pacific pattern is where a warm pool in the west drives deep atmospheric convection. Local winds cause nutrient-rich cold water to upwell along the South American coast.

El Niño is the warm phase

El Niño is the warm phase of the El Niño–Southern Oscillation (ENSO) and is associated with a band of warm ocean water that develops in the central and east-central equatorial Pacific. These cold/warm cycles last between two to seven years. The name comes about because the pool of warm water in the Pacific near South America is often at its warmest about Christmas.

La Niña is the cold phase

La Niña is the cold phase of the  El Niño–Southern Oscillation (ENSO).

Tracking what is going on matters. These variations impact the global climate and disrupts normal weather patterns. The disruption can lead to intense storms in some places and droughts in others. This is why the WMO will forecast such phases.

The WMO has introduced a new Global Seasonal Climate Update. It is currently in a trial phase. It also factors in other climate drivers such as the Indian Ocean Dipole.

The big ticket item will be the El Niño/Southern Oscillation. This has a major influence on global weather and climate patterns and is linked to hazards such as heavy rains, floods and drought. El Niño typically has a warming influence on global temperatures, whilst La Niña has the opposite effect. Forecasting this cycle will tell us what is coming.

There has been a ENSO-neutral since July 2019.

Even in the ENSO-neutral conditions, there is a very distinct warming trend.

“Even ENSO neutral months are warmer than in the past, as air and sea surface temperatures and ocean heat have increased due to climate change. With more than 90% of the energy trapped by greenhouse gases going into the ocean, ocean heat content is at record levels,” said WMO Secretary-General Petteri Taalas.

“Thus, 2016 was the warmest year on record as a result of a combination of a strong El Niño and human-induced global warming. 2019 was the second warmest year on record, even though there was no strong El Niño. We just had the warmest January on record. The signal from human-induced climate change is now as powerful as that from a major natural force of nature,” said Mr Taalas.

Even though ENSO neutral conditions have prevailed since last July, there was a strong positive phase of the Indian Ocean Dipole (IOD) – sometimes known as the “Indian Niño.” This was linked to drought which contributed to bush fires in Australia, and above average rainfall and flooding in Eastern Africa, the latter setting the scene for the current desert locust crisis in the region. The Indian Ocean Dipole is now neutral.

Above normal precipitation is expected just north of the equator in the central tropical Pacific and southwestern Indian Ocean extending into eastern equatorial Africa. Elevated probabilities of below-normal precipitation extend over much of the rest of the western tropical and extratropical Pacific. Below-normal precipitation is also likely for northern South America, Central America and the Caribbean, and southern Africa, according to WMO’s Global Seasonal Climate Update.  Southeast Asia, Oceania and western Australia, as well as southern Africa, Central America and the Caribbean, all also experienced drier to much drier than normal anomalies over the preceding November-January season.  An outlook for continued dry conditions in these sub-regions suggests that they should be closely monitored in the coming months.

The source for the WMO Global Seasonal Climate Updates comes from climate model predictions. These are produced by WMO Global Centres of Long Range Forecasts.