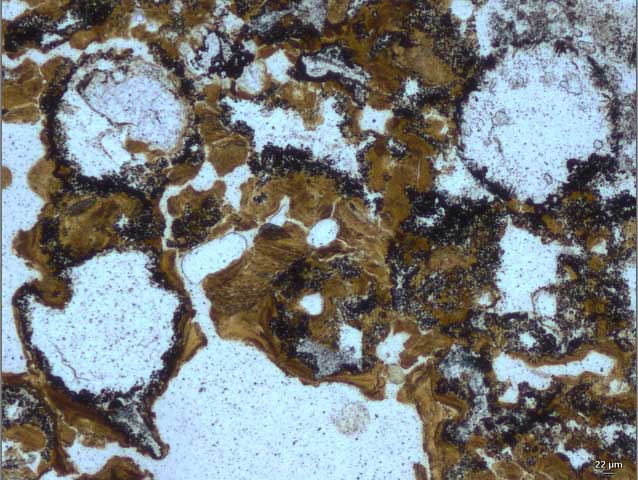 We know that Earth is 4.54 ± 0.05 billion years old. There are no rocks from Earth that old because the process of plate tectonics has recycled anything of that era, so the estimate for this age is based upon the probable age of the Solar System. Basically the assumption is that all the solid bodies in the solar system formed at the same time and are the same age. Radiometric dating enables us to find samples of rock all over the planet that exceed 3.5 billion years in age and the oldest (so far) are the Acasta Gneisses in northwestern Canada near Great Slave Lake (4.03 Ga). The Acasta Gneisses is not “primordial crust” but is metamorphic, so we know the earth is older than that.

We have lunar samples and also meteorite samples that are that old.

That however is all just background for the question in the subject line. When did life first appear on Earth?

The earliest date that is beyond any dispute is 3.48 billion years ago.  An article on Physics.org last May illustrates it …

Within the Pilbara hotspring deposits, the researchers also discovered stromatolites – layered rock structures created by communities of ancient microbes. And there were other signs of early life in the deposits as well, including fossilised micro-stromatolites, microbial palisade texture and well preserved bubbles that are inferred to have been trapped in a sticky substance (microbial) to preserve the bubble shape.

“This shows a diverse variety of life existed in fresh water, on land, very early in Earth’s history,” says Professor Van Kranendonk, Director of the Australian Centre for Astrobiology and head of the UNSW school of Biological, Earth and Environmental Sciences.

There is a claim for something even older

What they did was to study study the graphite within the rocks at Saglek Block in Labrador, Canada. After extensively examining the isotope composition they concluded that it was “biogenic” (had been formed by living organisms). Too be a tad more specific, it consisted mostly of the isotope carbon 12 (it has six protons and six neutrons in its nucleus). C12 exists naturally, as does Carbon 13. Since life prefers Carbon 12 (the lighter one), then a dominance of C12 suggests life was responsible.

“This is a biogenic signature,” they claim, but that is a huge leap for something that does actually exist naturally, and so this early date for life is not something that is being generally accepted.

What happens now is that others working in this field will want samples. Once they have them, they will then look very closely at them to see if a non-biological explanation for the C12 exists.

Clearly there is going to be a lot of dispute regarding the biogenic claim.

There are other contenders as well

Back last March the Washington post reported on the potential discovery of 3.77-billion-year-old fossils in Newfound …

Tiny, tubular structures uncovered in ancient Canadian rocks could be remnants of some of the earliest life on Earth, scientists say.

The straw-shaped “microfossils,” narrower than the width of a human hair and invisible to the naked eye, are believed to come from ancient microbes, according to a new study in the journal Nature. Scientists debate the age of the specimens, but the authors’ youngest estimate — 3.77 billion years — would make these fossils the oldest ever found.

That was, and still is, contentious. Some appropriate skepticism prevails. Are those really fossils? are the rocks really that old? … and so this is also being carefully reviewed independently by others. There are serious and wholly valid concerns about this one as well. Click the Wash Po link if curious for the details.

Another claim that goes back to Aug 2016 concerns a very similar date. “3.7-billion-year-old fossils may be the oldest signs of life on Earth” was the prevailing headline at the time. This one came from a team of Australian geologists who announced their discovery in a paper titled “Rapid emergence of life shown by discovery of 3,700-million-year-old microbial structures,”. Once again it was controversial and is not wholly accepted.

What makes that last one rather interesting is that it appears to be evidence for Stromatolites. If correct, then that simply could not be the earliest life. Stromatolites are sophisticated organisms and hence would need to have evolved from even more primitive life forms.

What is truly fascinating about all of this is that the arrival of life on a relatively young earth would strongly suggest that the emergence of life is an almost “cosmic imperative”. If truly correct, and remember that 3.48 Billion is accepted and is not disputed, then the possibility that we are not alone increases. It would be a rather strong hint that life in the universe may actually be abundant. Well yes, I’ve strayed a bit far from evidence and into conjecture with that last statement, but that perhaps is understandable when faced with such possibilities.

Papers describing such potential early evidence for life will inevitably provoke robust debate. It is all part of the ongoing conversation that never ceases, but also never stays the same. Instead it pushes the bubble of our understanding ever outwards into the vast undiscovered country.

3.48 billion years ago – Definitely, there is a prevailing consensus for this

3.7 billion years ago – Perhaps, but many are not convinced yet, the debate continues.

3.95 Billion years ago – Well … let’s see what the subject matter experts make of it as discussion continues.