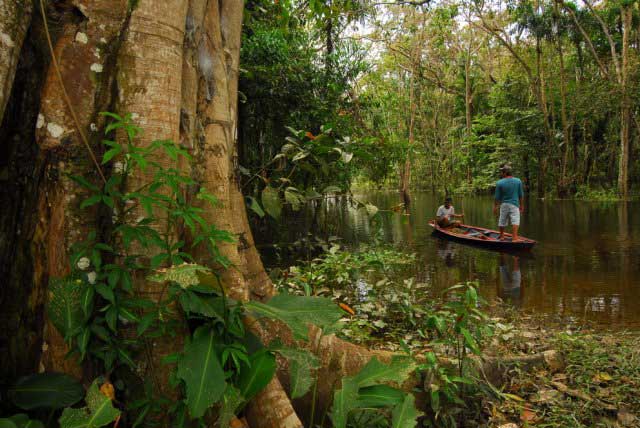 On a planet where we are increasing the amount of greenhouse gases, both the atmosphere and also the ocean become warmer. The rather obvious consequence is of course the the melting of ice and rising sea level, but other things also happen. Tropical Cyclones, (also known as Hurricanes) which are driven by warm oceans become more intense, and the amount of rain they drop increases because the warmer atmosphere holds more moisture. In other places weather patterns alter and intense droughts arise. It is one huge interconnected system.

Via a new study we now have yet another manifestation of a changing climate system.

In the Amazon rainforest that covers about 2 million square miles there is a very distinct dry season from July to November-December, and a Rainy season that runs from November-December until June. This is a very important CO2 sink so understanding what is happening there matters to us all.

Why is it the way it is, what drives these wet and dry phases?

Previous studies have revealed that the interannual variability of Amazonian wet-dry seasons could be largely attributed to variabilities in the South American monsoon system and the El Niño Southern Oscillation. However, up until now, nobody had looked to see if the amount of rainfall during the wet season has been changing in recent decades, so this study looked into that.

Published a few days ago in the open access peer-reviewed journal, Environmental Research Letters, Professors Zhu Jiang, Li Xichen and Ph.D. student Wang Xinyue at the Institute of Atmospheric Physics, Chinese Academy of Sciences, and Professor Clemente A. S. Tanajura of the Institute of Physics, Federal University of Bahia lay out their findings.

Key Discovery: Amazonian rainfall in the wet season has greatly increased during the past three decades (1979-2015)

by combining both satellite and in situobservations, it is revealed that tropical Amazonian precipitation has significantly increased by ~180 to 600 mm (in different datasets) in the wet season during the satellite era from 1979 to 2015. We then use a state-of-the-art atmospheric model to simulate the impact of the tropical sea surface temperatures (SSTs) on the precipitation changes. Results show that the multidecadal warming of the tropical Atlantic has contributed more than half of this precipitation change over the past three decades, while the east Pacific cooling plays a secondary role. We finally combine the simulation results and the reanalysis data to investigate the mechanisms of this process, i.e. the SST variability dramatically increases the convergence of the moisture transport over the Amazon region.

OK, let’s turn that into a picture for you … 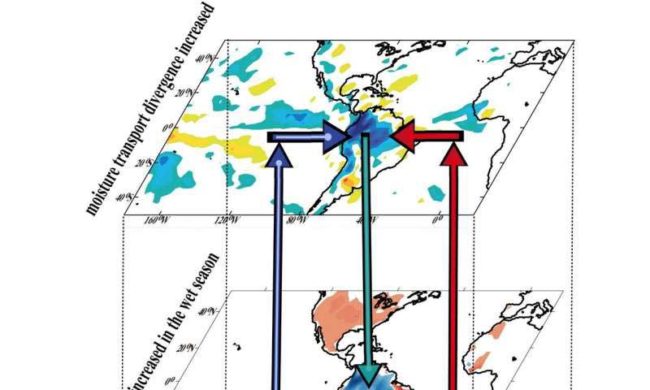 In a warming world the sea surface temperature (SST) of both the Atlantic and also the Pacific increases. This leads to an increase in the amount of rainfall in the Amazon.

Why different colours of arrows?

An increase in the amount of rain during the wet season does not sound to be something dramatic, so why does this matter?

Well for a start, it is not a tiny increase, we are talking about an increase of 7–24 inches. That’s a dramatic increase.

A great deal of evaporation takes place. This evaporated water is then transported all around the globe, so it impacts us all and not just the Amazon. Their published paper lays it out like this within their “Conclusions” section as follows …

The precipitation over the Amazon is critical for the global climate system. The rainforest provides plenty of water vapor, making an important contribution to the global water cycle. The intensified deep convection, shown in this study, may alter the Walker circulation over the Pacific and the Atlantic oceans, and thus influence the inter-basin teleconnection between these two ocean basins.

The precipitation over the Amazon is also very important for global hydrology and the ecology system. As rainfall increases during the wet season, photosynthesis is weakened and the growth rate of rainforest plants may slow down. These processes affect the energy exchange and the carbon cycle.

Beyond that, the precipitation changes could lead to habitat loss and may even result in species extinction. Moreover, torrential rain has caused flooding and landslides.

Our results show that tropical SST [Sea Surface Temperature] changes, in particular the Atlantic warming, can influence the precipitation and deep convection over tropical South America during its wet season. The tropical SST-induced Amazonian deep convection may have a further impact on the large-scale atmospheric circulation over the global ocean, which requires further study.

Bottom Line: What we are doing is all interconnected within the climate system, and so here is yet one more piece of the jigsaw.