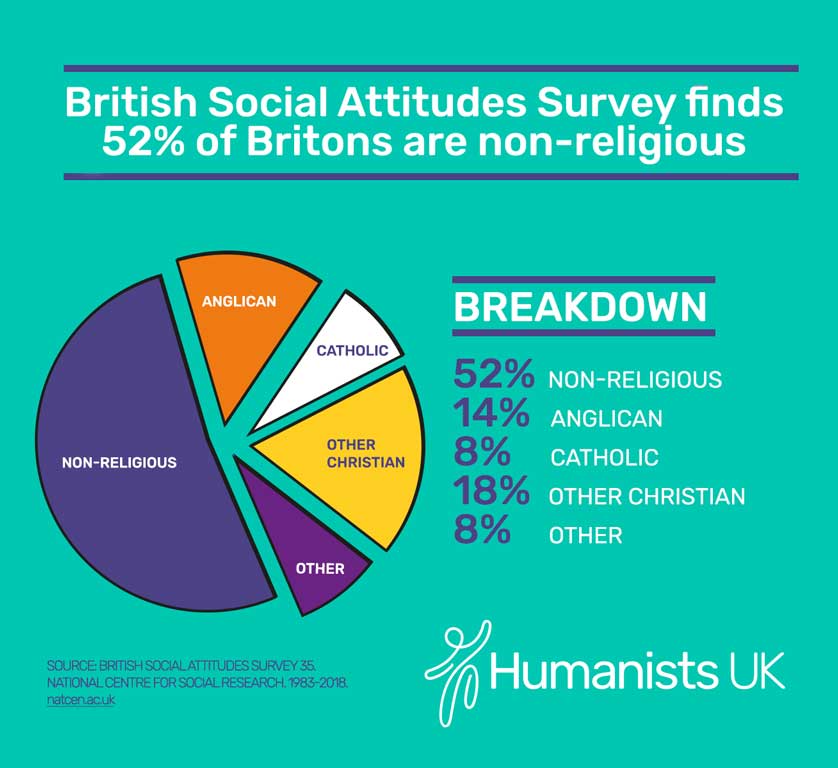 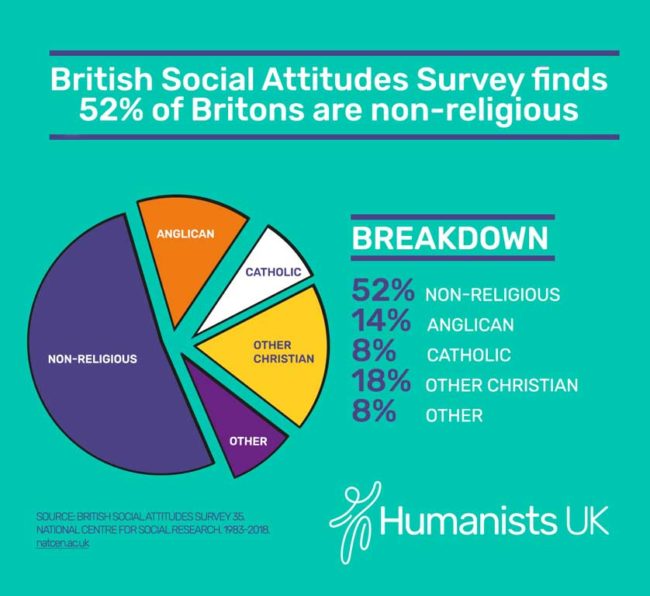 The UK’s National Center for Social Research have just issued a press release with the latest numbers on 7th September. These numbers reflect data gathered in 2017. As data is processed they tend to dribble out insights and so this latest press release is part of that process.

What are the latest highlights?

Well yes, I guess the graphic and also the article title is a spoiler, but there are some quite interesting details as well.

As you can see from the picture above produced by Humanists UK, the population numbers across any and all belief breaks down as follows …

So the really big highlight is that 52% of the population identified as “Not Religious”. For comparison, in 2002 that number was only 41%.

One other observation that this all reveals is that this trend will continue.

Well basically because of this …

Of those that believe, How many practise their belief?

Another strong signal that points towards this decline is a measure of those that attend religious services.

Well, the question asked was “Do you attend church services more than once a month?”

Are these people who have a faith that is faltering or is something else going on? Personally I suspect that when asked on a survey to tick a box, some people are associating with their cultural heritage when they tick “Catholic” or “Church of England”, and don’t tick it to indicate that this is what they actually believe. The lack of participation is perhaps a strong signal that many of those that tick such boxes are not actually religious at all. Yes, I’m speculating, but I think I’m being reasonable to consider this as the most probable explanation.

You might also wonder why the number of those that associate with “Catholic” and also practise is so high. This is perhaps belief driven. Within Catholicism, not attending Mass on a regular basis is deemed to be a mortal sin. In other words, if you do actually believe and you are also Catholic, then your belief will motivate you to make the effort. To put that another way, if it is not mandatory (as in the Church of England), then 79% don’t bother going. If however it is a mandatory part of the belief, then 52% don’t go because they probably don’t believe … or to put that another way, perhaps about 25% of those that don’t go to their local C of E do actually believe, they would simply prefer to sleep in on a Sunday.

They have separate, similar, but even higher numbers for Scotland.

“Our figures show an unrelenting decline in Church of England and Church of Scotland numbers. This is especially true for young people where less than 1 in 20 now belong to their established church. While the figures are starkest among younger people, in every age group the biggest single group are those identifying with no religion.

“We know from the British Social Attitudes survey that people’s views are becoming more socially liberal on issues like same sex relationships and abortion. With growing numbers belonging to no religion, faith leaders will no doubt be considering how to better connect to a changing society.”

‘These figures must surely act as an urgent wake-up call for the need to have a renewed conversation about the place of religion or belief in British public life, so that a new settlement can be forged that is more equitable for all and is better able to serve future generations.’

In the US you have an essentially secular republic, yet you also have a highly religious population.

Meanwhile, here in the UK where the head of State (the Queen) is also the official head of the Church of England, and the House of Lords is stuffed full of 26 Church of England clerics whose duty is to meddle in lawmaking, we have a clear majority of the population that are not actually religious at all.

My own personal experience of growing up is one where my father would take me to religious services every Sunday (Methodist). What was obvious to me is that he was not deeply religious and yet he did still attend with me on a regular basis. That perhaps was driven by an emotional bond; his father was the minister.

Times are clearly changing and there is an ongoing shift away from formal belief. The vastly larger numbers of non-religious amongst the younger generation more or less guarantee that this trend will continue and will be driven, not by people changing their minds about what they believe, but rather by the older more religious generation passing away and being replaced by a far less religious generation.