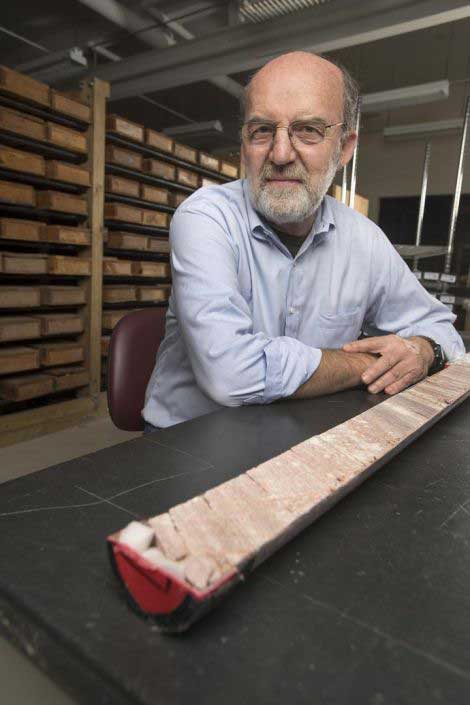 Looking back over deep time, we know that periods of glaciation come and go in regular pulses and that there have been variations in climate. It has been clear for some time that there exists a natural variation that is driving this.

What is going on, why is it like this?

The Serbian astronomer, Milutin Milankovitch, is credited with the calculation of the orbital variations that are now known as Milankovitch Cycles. There are in fact three of these cycles, so let’s briefly review each.

Our orbit around the sun varies from being a perfect circle to being an ellipse. The variation is in the range of about 0-5% and cycles between these two over a period of about 100,000 years.

This second cycle varies over a period of about 41,000 years. Our alias tilt varies between 21.5 and 24.5 degrees. This is what accounts for our seasonal variations.

This is the Earth’s slow wobble as it spins on axis. This wobbling of the Earth on its axis can be likened to a top running down, and beginning to wobble back and forth on its axis. The precession of Earth wobbles from pointing at Polaris (North Star) to pointing at the star Vega. When this shift to the axis pointing at Vega occurs, Vega would then be considered the North Star. This top-like wobble, or precession, has a periodicity of 23,000 years.

The update here is that there is a new study that presents clear empirical evidence that directly confirms such variations.

Entitled “Empirical evidence for stability of the 405-kiloyear Jupiter–Venus eccentricity cycle over hundreds of millions of years”, it has been published within the Proceedings of the National Academy of Sciences (PNAS).

Rhythmic climate cycles of various assumed frequencies recorded in sedimentary archives are increasingly used to construct a continuous geologic timescale. However, the age range of valid theoretical orbital solutions is limited to only the past 50 million years. New U–Pb zircon dates from the Chinle Formation tied using magnetostratigraphy to the Newark–Hartford astrochronostratigraphic polarity timescale provide empirical confirmation that the unimodal 405-kiloyear orbital eccentricity cycle reliably paces Earth’s climate back to at least 215 million years ago, well back in the Late Triassic Period.

Permit me to translate that for you.

The researchers drilled down 1,700 feet into the rocks in Arizona. They then determined the age of the various rock layers by analyzing interspersed volcanic ash layers containing radioisotopes that decay at a predictable rate. This clearly established the 250 million time period. They then merged these findings with New York-New Jersey core samples. Those penetrated old lakebeds and soils that hold exquisitely preserved signs of alternating wet and dry periods during what was believed to be the same time. By combining these two sets of data, the team showed that both sites developed at the same time, and that there is a 405,000-year interval that exerts a kind of master control over climate swings.

Scientists drilling deep into ancient rocks in the Arizona desert say they have documented a gradual shift in Earth’s orbit that repeats regularly every 405,000 years, playing a role in natural climate swings. Astrophysicists have long hypothesized that the cycle exists based on calculations of celestial mechanics, but the authors of the new research have found the first verifiable physical evidence. They showed that the cycle has been stable for hundreds of millions of years, from before the rise of dinosaurs, and is still active today.

This relates directly to the first of the Milankovitch Cycles as follows. The variation of our orbit from a perfect circle to an ellipse and then back again takes 405,000 years …

“There are other, shorter, orbital cycles, but when you look into the past, it’s very difficult to know which one you’re dealing with at any one time, because they change over time,” said lead author Dennis Kent, an expert in paleomagnetism at Columbia University’s Lamont-Doherty Earth Observatory and Rutgers University. “The beauty of this one is that it stands alone. It doesn’t change. All the other ones move over it.”

Using the core data the researchers have gathered, they explain how this causes the climate to vary …

Kent and Olsen say that every 405,000 years, when orbital eccentricity is at its peak, seasonal differences caused by shorter cycles will become more intense; summers are hotter and winters colder; dry times drier, wet times wetter. The opposite will be true 202,500 years later, when the orbit is at its most circular. During the late Triassic, for poorly understood reasons, the Earth was much warmer than it is now through many cycles, and there was little to no glaciation. Then, the 405,000-year cycle showed up in strongly alternating wet and dry periods. Precipitation peaked when the orbit was at its most eccentric, producing deep lakes that left layers of black shale in eastern North America. When the orbit was most circular, things dried up, leaving lighter layers of soil exposed to the air.

Basically it is Jupiter and also Venus exerting a gravitational pull as regular as clockwork that causes these orbital variations.

So where are we right now in that cycle?

Once you grasp the above then this rather obvious question will naturally pop up.

The Earth is currently in the nearly circular part of the 405,000-year period. To put that another way, we are at the peak of a 20,000 warming trend that ended the last ice age.

For completeness, I do need to make something abundantly clear. This planetary cycle is slow and very gradual. This does not in any way account for the rapid global warming we are experiencing today. We know that is very much down to the vast amount of CO2 we are pouring into the atmosphere and is not due to an orbital variation.

The insights from this study are just a beginning

Kent and Olsen, the authors of the study, say that because of all the competing factors at work, there is still much to learn.

“This is truly complicated stuff,” said Olsen. “We are using basically the same kinds of math to send spaceships to Mars, and sure, that works. But once you start extending interplanetary motions back in time and tie that to cause and effect in climate, we can’t claim that we understand how it all works.”

The metronomic beat of the 405,000-year cycle may eventually help researchers disentangle some of this, he said.