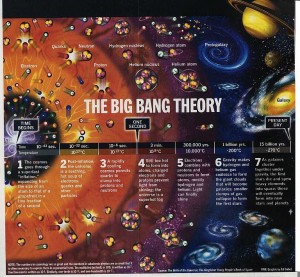 I like to debate in various forums with many different folks about many different things. Why? Well it helps me to learn, and also I like to have my assumptions and thoughts rigorously challenged. In such contexts, I often come across some who express a thought that goes like this …

Gosh, the universe is a truly amazing place, look at all the complexity. We have no idea what caused it all so obviously God did it all.

This is the core of many justifications for a belief in God. I truly get it that people believe, but they still need to understand that this is not the answer, substituting “God did it” instead of “I don’t know” tells you nothing at all and uses exactly zero evidence to make that leap, it is not a good answer. To illustrate that point, I can deploy a variety of different answers that work just as well …

Each of the above is just as credible as the “God did it” hypothesis, and also have exactly zero evidence. I’m sure you can perhaps dream up several other variations.If you can vary your answer like this, then it is not a good answer.

When you point all this out, a common question is then put on the table …

OK, so where did the universe come from, how can you possibly have something from nothing?

The reply I see many deploy is to simply suggest, “The Big bang explains it all, go and read up on that“. Now there is a problem with that answer, it is not factually correct. Now, please do not misunderstand me, I am not suggesting that the Big Bang cosmological model is wrong, but rather that it does not explain the actual origin. I’ll clarify that and briefly explain what it does and does not tell us.

Does the Big Bang explain the actual origin of the universe?

No, the Big Bang theory is the prevailing cosmological model that explains the early development of the Universe, but does not explain how it started. According to the Big Bang theory, the Universe was once in an extremely hot and dense state which expanded rapidly. This rapid expansion caused the young Universe to cool and resulted in its present continuously expanding state.

Now let me make one thing 100% clear, it was not an explosion, but instead is all about how the universe expanded with incomprehensible speed from its pebble-size origin to astronomical scope. The name itself came from Fred Hoyle during a 1949 radio broadcast. He used the term at that time to mock the idea because he much preferred a steady state model, and the name stuck.

How do we know that the big bang model is right?

It is a well-tested scientific theory which is widely accepted within the scientific community because it is the most accurate and comprehensive explanation for the full range of phenomena astronomers observe.

So what has been actually seen? Well, we have what are sometimes called “the four pillars of the Big Bang theory”. These are:

Lets take a quick look at the first. Edwin Hubble discovered that the distances to far away galaxies were generally proportional to their redshifts. Hubble’s observation was taken to indicate that all very distant galaxies and clusters have an apparent velocity directly away from our vantage point: the farther away, the higher the apparent velocity. The conclusion made from this obsevation is that the universe is expanding.

If the distance between galaxy clusters is increasing today, then that ment that everything must have been closer together in the past.

Ah, so where did the Universe actually come from, what caused the singularity 13.4 Billion years ago?

We have no idea, but there are some interesting thoughts, for example that ours is one of many universes. There are different  proposals, but none have been proven … yet.

We still have the question – “How can you have something from nothing?”

Well, an interesting answer to that comes from Lawrence Krauss, a well-known theoretical physicist. His new book addresses this very topic, “A Universe from Nothing“.

Quantum theory provides a natural explanation for how energy can come out of nothing. Throughout the universe, particles and antiparticles spontaneously form and quickly annihilate each other without violating the law of energy conservation. These spontaneous births and deaths are known as “quantum fluctuations.” Indeed, laboratory experiments have proven that quantum fluctuations occur everywhere, all the time.

This would indeed indicate that the answer to the ultimate question is that the universe is the ultimate free lunch! It came from nothing, and its total energy is zero, but it nevertheless has incredible structure and complexity. There could even be many other such universes, spatially distinct from ours.

One final thought, you are at the cutting edge here. Richard Fynman, once talked about things we do not yet know like this …

I can live with doubt, and uncertainty, and not knowing. I think it’s much more interesting to live not knowing than to have answers which might be wrong. I have approximate answers, and possible beliefs, and different degrees of certainty about different things, but I’m not absolutely sure of anything, and in many things I don’t know anything about, such as whether it means anything to ask why we’re here, and what the question might mean. I might think about a little, but if I can’t figure it out, then I go to something else. But I don’t have to know an answer. I don’t feel frightened by not knowing things, by being lost in a mysterious universe without having any purpose, which is the way it really is, as far as I can tell, possibly. It doesn’t frighten me. – Richard Feynman

You might also like to watch the following popular YouTube clip of Lawrence Krauss explaining how you get a universe from nothing. It is about an hour long, but is well-worth watching.

1 thought on “Where did the Universe come from?”