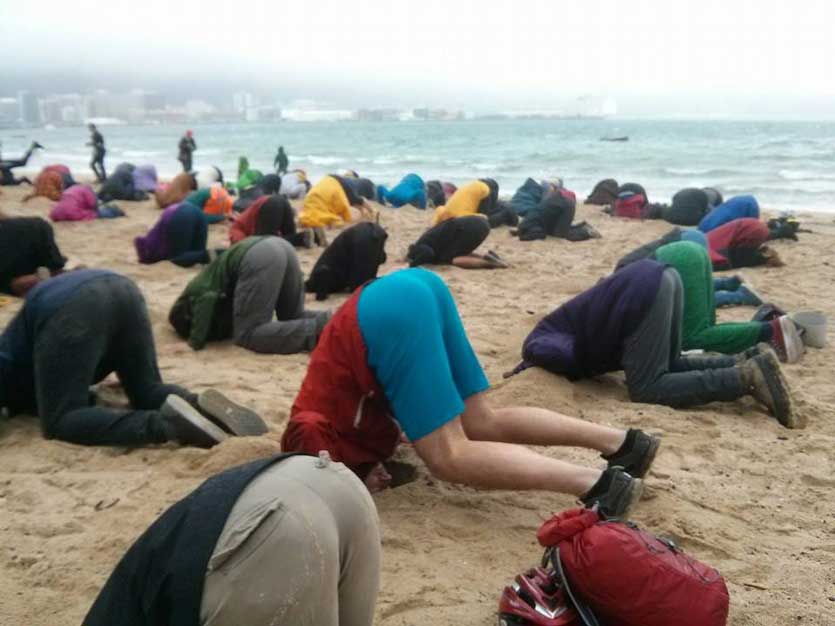 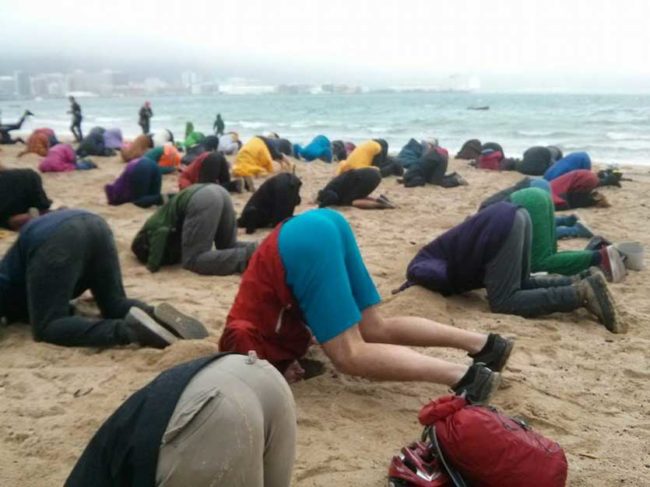 I’ve previously written a few postings on this topic. Back in May I was writing about the censorship of press releases at the US Department of the Interior (a study highlighted an increasing risk of global flooding, but the press release purged all references to the cause being Climate change). A month later evidence was starting to emerge that specific steps had been taken to censor drafts of the content of a scientific report itself.

Today we also have a few more examples of more scientific censorship.

If you can’t measure what is going on then the problem simply does not exist … right?

Paul Voosen has written an article in Science …

In recent years, though, satellite and aircraft instruments have begun monitoring carbon dioxide and methane remotely, and NASA’s Carbon Monitoring System (CMS), a $10-million-a-year research line, has helped stitch together observations of sources and sinks into high-resolution models of the planet’s flows of carbon. Now, President Donald Trump’s administration has quietly killed the CMS, Science has learned.

The White House has mounted a broad attack on climate science, repeatedly proposing cuts to NASA’s earth science budget, including the CMS, and cancellations of climate missions such as the Orbiting Carbon Observatory 3 (OCO-3). Although Congress fended off the budget and mission cuts, a spending deal signed in March made no mention of the CMS. That allowed the administration’s move to take effect, says Steve Cole, a NASA spokesperson in Washington, D.C. Cole says existing grants will be allowed to finish up, but no new research will be supported.

The agency declined to provide a reason for the cancellation beyond “budget constraints and higher priorities within the science budget.” But the CMS is an obvious target for the Trump administration because of its association with climate treaties and its work to help foreign nations understand their emissions, says Phil Duffy, president of the Woods Hole Research Center in Falmouth, Massachusetts. And, unlike the satellites that provide the data, the research line had no private contractor to lobby for it.

I get that priorities sometimes mean that important things gets cut when budgets are limited, but this goes way beyond that. This move is a rather blatant denial of the most important challenge our species has ever faced. If you house is burning down, you don’t spend you limited time and resources on something else, you focus on the most important immediate issue.

The degree of stupidity involved in making this decision is jaw-droopingly astonishing. The problem we face is not going to go away by pretending it is not there.

This next article is an in-depth expose written by Chris Mooney and Missy Ryan. It reveals with clear decisive evidence that a defence department report that examines the threats faced by military bases has had most of the references to climate change purged from earlier drafts.

The earlier version of the document, dated December 2016, contains numerous references to “climate change” that were omitted or altered to “extreme weather” or simply “climate” in the final report, which was submitted to Congress in January 2018. While the phrase “climate change” appears 23 separate times in the draft report, the final version used it just once.

Is this an explicit attempt to censor?

Well … not as such. It would appear that this is an attempt to duck the administration’s climate denialism and remain neutral. It might be seen by some as pragmatic, but it is not that. Some things are simply too important and don’t warrant not mentioning or sugar coating.

Those and other edits suggest the Pentagon has adapted its approach to public discussion of climate change under President Trump, who has expressed doubt about the reality of a phenomenon that scientists agree presents an increasing danger to the planet. While military leaders have said they see a changing climate as a driver of instability worldwide, they have also sought to stay out of a politically charged debate about its causes.

When asked to comment, it should be no surprise to learn that a Pentagon official declined to comment on the changes that the Washington Post article highlights.

To give you an illustration, here is a before and after comparison with the omissions that have been purged highlighted … 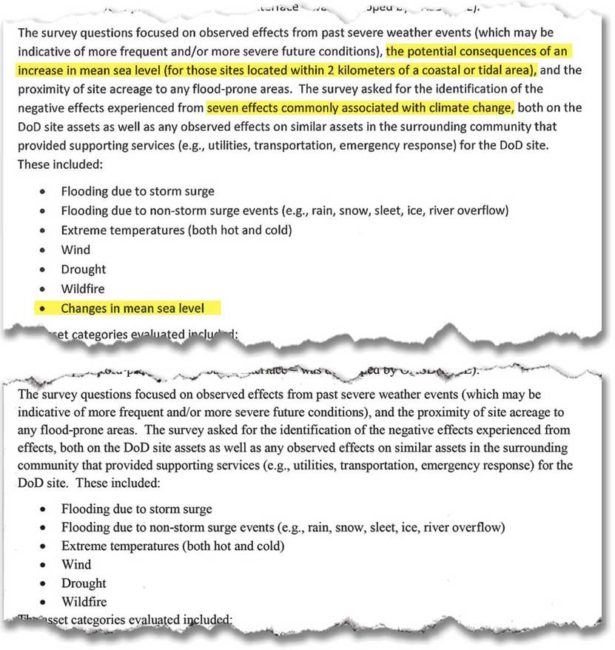 It was not simply a bit of wordsmithing, a map showing sites that will be impacted by sea-level rise has vanished …

“The wordsmithing, not saying ‘climate,’ I could live with that,” said Dennis McGinn, a retired Navy vice admiral who served as assistant secretary of the Navy for energy, installations and environment in the Obama administration, when some of the changes were described to him. “But taking out … maps of critical areas of flooding, that’s pretty fundamental. And the Arctic, that’s huge, for a lot of reasons, not just for Department of Defense, but for the Coast Guard, and commercial shipping business.”

The denial of reality does not in any way actually alter reality. The on going climate change will continue no matter what opinions are expressed. One commenter expressed the insanity of it all this way …

the U.S. Air Force training manuals have eliminated the terms “avionics,” “thrust,” “pitch and yaw,” and “gravity,” and replaced them all with “and then Jesus lifts our planes upon his wings …”

To put all this another way. With each passing day it is becoming increasingly clear that the movie Idiocracy was not a comedy, but instead was a documentary.