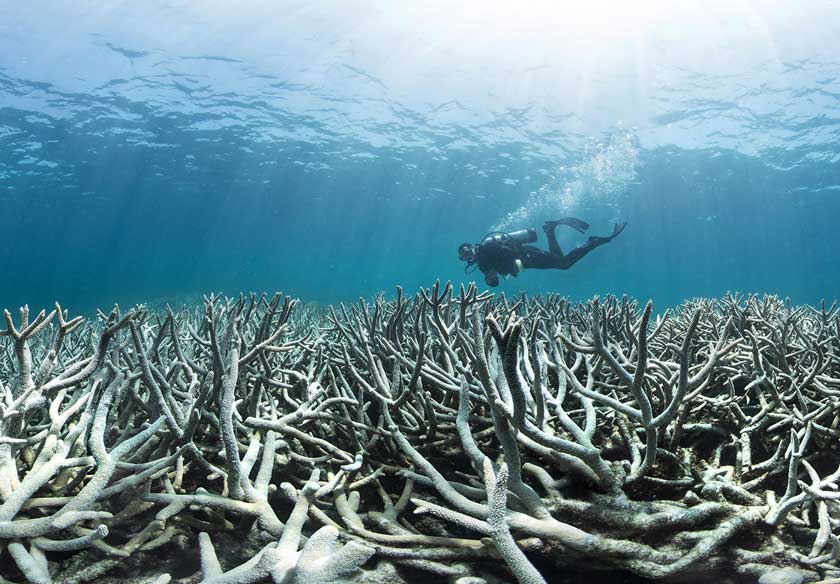 I’ve previously written about the 2016 bleaching event at the great barrier reef back in 2016. The update is that a new paper has just been published in Nature that contains a scientific analysis of what happened.

Our study bridges the gap between the theory and practice of assessing the risk of ecosystem collapse, under the emerging framework for the International Union for Conservation of Nature (IUCN) Red List of Ecosystems, by rigorously defining both the initial and collapsed states, identifying the major driver of change, and establishing quantitative collapse thresholds.

Coral has a symbiotic relationship with algae-like unicellular organisms. It is specifically Zooxanthellae that give coral its coloration. When the coral comes under stress due to variations in the sea temperature then that causes it to become too hot or too cold. The coral responds by ejecting their zooxanthellae, thus they turn white and so become bleached.

Key Point 1: The coral is still alive, but the problem is that coral needs the Zooxanthellae to get about 90% of its energy, so without this, it eventually either recovers or slowly starves and dies. Well … that has been the general understanding, but what happened was something different, and that was a surprise to the researchers.

Impact: The 2016 event resulted in the destruction of 30% of the corals during then in month period March to November.

What has their study documented?

Sometimes there are words you don’t want to hear

Within a climate change context a turn of phrase you really don’t want to hear from the subject matter experts is “We were surprised” in the negative sense. Unfortunately, that is becoming increasingly common, and this instance is no exception …

“When corals bleach from a heatwave, they can either survive and regain their colour slowly as the temperature drops, or they can die, Averaged across the whole Great Barrier Reef, we lost 30% of the corals in the nine-month period between March and November 2016.”

“The conventional thinking is that after bleaching corals died slowly of … starvation. That’s not what we found. We were surprised that about half of the mortality we measured occurred very quickly.” – Prof Terry Hughes, the director of the ARC Centre of Excellence for Coral Reef Studies and also the lead author.

I should add that all is not yet lost, we can still take meaningful action, that is within our grasp. In fact we are doing exactly that, so hope does remain. Prof Hughes, the lead author of the paper, is the subject matter expert on the ground and did also make this observation as well …

“But, that still leaves a billion or so corals alive, and on average, they are tougher than the ones that died. We need to focus urgently on protecting the glass that’s still half full, by helping these survivors to recover,”

“The Great Barrier Reef is certainly threatened by climate change, but it is not doomed if we deal very quickly with greenhouse gas emissions. Our study shows that coral reefs are already shifting radically in response to unprecedented heatwaves.”

After what has happened is there any justification for taking that stance?

Actually yes there is. The 2016 bleaching event triggered an unprecedented loss of corals on the northern third of the Great Barrier Reef, and to a lesser extent, the central third, with almost no heat-stress mortality occurring further south.

The most likely scenario is that coral reefs throughout the tropics will continue to degrade over the current century until climate change stabilises. This will allow the remnant populations to reorganize into novel, heat-tolerant reef assemblages. The 2016 marine heatwave has triggered the initial phase of that transition on the northern, most-pristine region of the Great Barrier Reef.

If the targets in the Paris agreement are met, the reef will survive as “a mixture of heat-tolerant [corals], and the ones that can bounce back”.

If warming continues apace: “Then it’s game over.”

It's NOT too late to save the #GreatBarrierReef from climate change, but we ARE running out of time – our latest paper today in @nature https://t.co/YeW6ymNDok https://t.co/cFuICWp8Hx