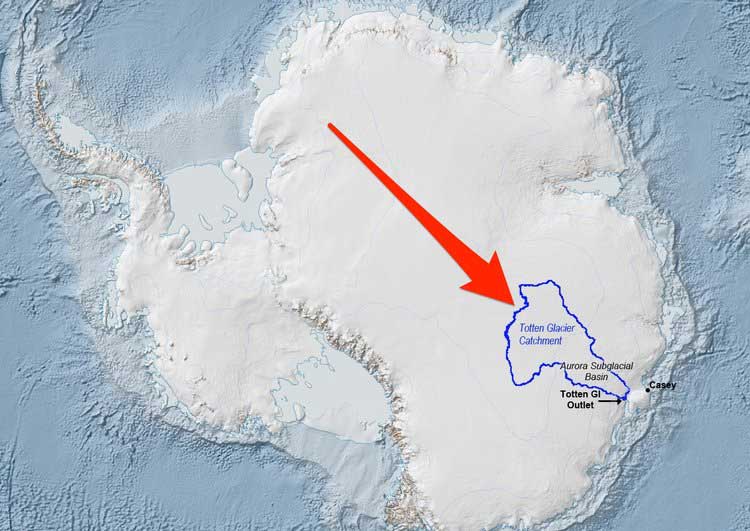 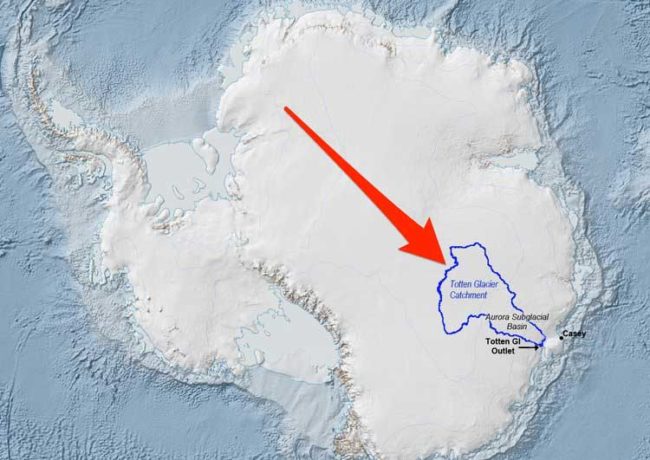 In the East of Antarctica there are two ice sheets named “Totten” and also “Moscow University”. These together contain enough ice to raise sea level by as mush as five meters. There is a new study that has been published that used the Gravity Recovery and Climate Experiment (GRACE) satellites to measure what is currently going on. Spoiler Alert: It’s not good news.

Published in Geophysical Research Letters, and openly available here, the key information is this …

What is GRACE measuring?

It’s not one satellite, but instead is a pair (nicknamed “Tom” and “Jerry”) that remain in constance communication.

Glacier ice loss, when large enough, will alter this measurement.

What the new study does is to calibrate these data readings that have been taken over the glaciers over the years of operation for these satellites. (They have been up there taking measurements since 2002). Ice loss means less of a gradational pull, hence the amount of ice loss can be calculated.

What is unique about this study?

It’s not the first to use GRACE data to probe the Totten glacier. For example, in 2009 there was a study that used GRACE data for a forward modeling scheme to estimate the mass balance of Antarctica as the sum of nine uniform areas of large change plus the remaining area of the continent.

What is new here is that this study has employed an optimized regional spherical cap basis to recover a regional time series at the sub-basin level in the Totten/Moscow area. 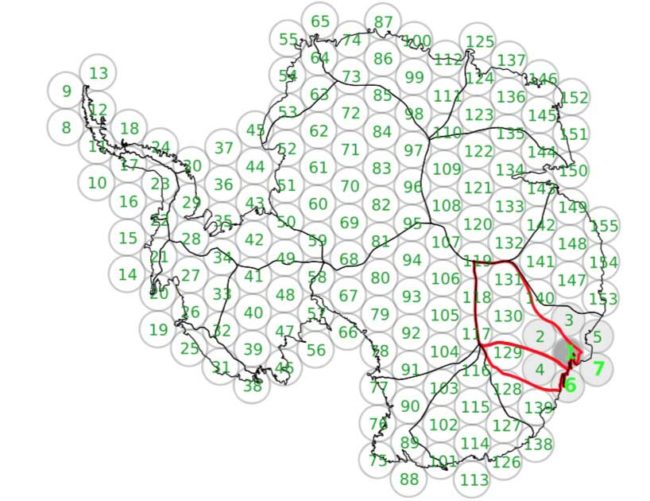 … and then captured over time and compared to determine the rate of ice loss.

Overall the ice loss from all of Antarctica has tripled in the last 10 years and now exceeds 200 billion tons. If the rate of this ice loss continues, then we are in serious trouble … yet so far we are still quite oblivious in many ways to what is going on.

In a study published in July, scientists found that the Totten and Moscow University glaciers of East Antarctica—directly south of Australia—lost about 18 billion tons of ice each year between 2002 and 2016. The glaciers sloughed off enough mass every year to cover New Jersey three feet deep in ice.

That’s only about a third of what the West Antarctic glaciers are losing each year. But locked up in the Totten and the smaller neighboring Moscow University glaciers of East Antarctica is enough ice to raise sea levels over 16 feet

1. It's time to talk — again — about Totten glacier, East Antarctica. In size, it’s somewhere between California and Texas. Single-handedly, it could raise global sea levels by nearly 13 feet. They basically don’t get any bigger than this. https://t.co/4w6ctuShhr

3. We worry a lot about West Antarctica these days. But as a new study notes, if Totten were to go it could raise sea levels more than all glaciers and all the ice in West Antarctica combined. https://t.co/4w6ctuShhr

5. So changes in the Totten area would be very bad – and we know they are happening. Scientific teams have detected what is essentially an enormous current of warm ocean water flowing towards Totten.

7. (The water really isn’t actually “warm” according to colloquial understanding – it’s just slightly above the freezing point. But it is salty, which helps the melting process – and the pressure at these extreme depths increases melting even further.)

11. The Totten region’s loss of 18 billion tons would be a lot for nearly any other glacier (or pair of glaciers) in the world. But for Totten, it’s not that huge. It would take some 20 years for this contribution to amount to a single millimeter of sea level rise.

15. In sum, Totten is a place where just a little additional change would be quickly measured in billions of tons of additional ice going into the ocean.

https://t.co/eTs1ViwJuN’s the epitome of the kind of massive planetary system that we humans, with our greenhouse gas emissions, could blunderingly perturb or destabilize– not even realizing what we’re doing — and then be powerless to stop. /end