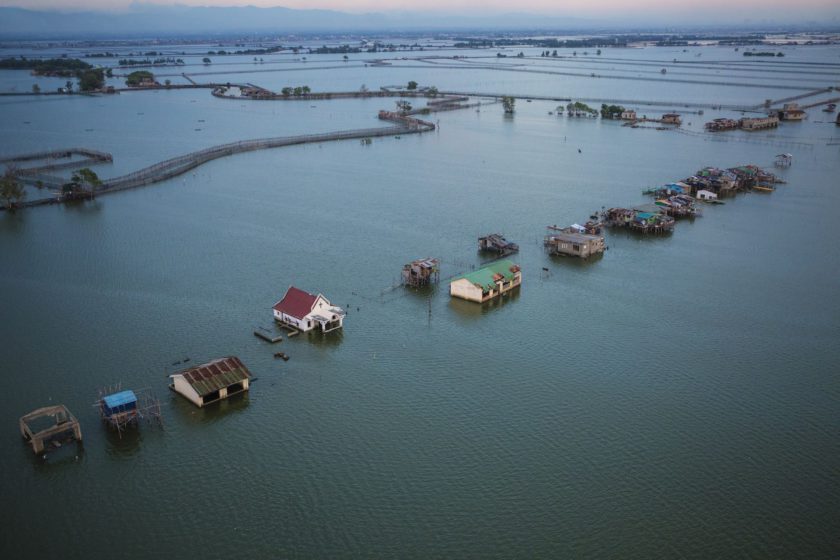 We know that sea level is rising. In fact, we know that it is rising at an accelerating pace. Despite the claim from a Republican lawmaker back in 2018, it is not because rocks are falling into the sea. We also have climate models that contain projections for sea level rise for the various possible scenarios, and so when measured against those, how are we doing?

There is a new paper that has just been published in Nature. It is not good news. The subject line of this posting sums it up.

Published in Nature Climate Change on Aug 31, 2020, the paper reveals the path we are going down.

Ice sheets in Greenland and Antarctica whose melting rates are rapidly increasing have raised global sea level by 1.8cm since the 1990s, and are matching worst-case climate warming scenarios.

According to a new study led by Dr Tom Slater from the Centre for Polar Observation and Modelling at Leeds and with the Danish Meteorological Institute, if these rates continue the ice sheets are expected to raise sea levels by a further 17cm and expose an additional 16 million people to annual coastal flooding by the end of the century.

The worst-case scenarios are those predicted by the Intergovernmental Panel on Climate Change (IPCC).

Since the ice sheets were first monitored by satellite in the 1990s, melting from Antarctica has pushed global sea levels up by 7.2mm, while Greenland has contributed 10.6mm. And the latest measurements show that the world’s oceans are now rising by 4mm each year.

“Although we anticipated the ice sheets would lose increasing amounts of ice in response to the warming of the oceans and atmosphere, the rate at which they are melting has accelerated faster than we could have imagined,” said Dr Slater.

“The melting is overtaking the climate models we use to guide us, and we are in danger of being unprepared for the risks posed by sea level rise.”

Dr Anna Hogg, study co-author and climate researcher in the School of Earth & Environment at the Leeds, said:

“If ice sheet losses continue to track our worst-case climate warming scenarios we should expect an additional 17cm of sea level rise from the ice sheets alone. That’s enough to double the frequency of storm-surge flooding in many of the world’s largest coastal cities.”

What causes Sea Level to Rise?

There are two things happening. Rather obviously if land based ice melts then you have more water in the ocean. What is not so well known is that if you warm water, it will expand. This also plays a role.

So far, global sea levels have increased in the most part through a mechanism called thermal expansion, which means that volume of seawater expands as it gets warmer. But in the last five years, ice melt from the ice sheets and mountain glaciers has overtaken global warming as the main cause of rising sea levels.

“It is not only Antarctica and Greenland that are causing the water to rise. In recent years, thousands of smaller glaciers have begun to melt or disappear altogether, as we saw with the glacier Ok in Iceland, which was declared “dead” in 2014. This means that melting of ice has now taken over as the main contributor of sea level rise.”

The Antarctic and Greenland ice-sheets contain enough water to raise global sea levels by 58 m and 7 m, respectively. As the largest source of potential sea-level rise, modest losses from these ice sheets will increase coastal flooding and
affect oceans through freshwater input.

Since the satellite record began in the 1990s, Antarctica and Greenland together have raised global sea levels by 17.8 mm, and the volume of ice lost has increased over time. Of this, 7.2 mm originate from Antarctica where ocean-driven melting and ice-shelf collapse have accelerated ice flow; the remaining 10.6 mm come from Greenland, which, despite holding less ice, accounts for 60% of the recent ice-sheet contribution as oceanic and atmospheric
warming have increased ice discharge and surface meltwater runoff.