Looking back in history there are clear, very obvious and well-known examples of  confrontation between religious superstition and science, for example Galileo Galilei, arrested and hauled before the inquisition for heresy because he supported the observation that the sun stands still and that it is the earth that moves. Rome might indeed have truly “believed” but the stark truth they needed to eventually face up to was that the earth was clearly not the centre – “Eppur si muove” (And yet it moves).

“By denying scientific principles, one may maintain any paradox” – Galileo Galilei

I’ll now turn to a rather more stark example of the complete and utter suppression of evidence based science by religious superstition from that same era, and I’ll then move on to a rather wrenched and very shocking modern example.

We know that science within the early Islamic civilization flourished up to about the Middle Ages, but then began declining at some time around the 14th to 16th centuries, what happened? The root cause appears to be the “rise of a clerical faction which froze this same science and withered its progress.” (Islamic Technology: An Illustrated History by Ahmad Y. al-Hassan and Donald Hill, Cambridge University Press, 1986, p.282). One very clear and tragic example concerns the fate of Taqi al-Din‘s great Istanbul observatory in Galata. It was on par with the observatory the famous Danish astronomer Tycho Brahe, yet while Brahe opened the way to a vast new development in astronomy, Taqi al-Din did not, so what happened?  Taqi al-Din’s observatory was demolished by a squad of religious thugs in 1577. The Chief Mufti (the primary Islamic cleric of the time) whispered in the ear of the sultan that Taqi al-Din was doing evil, and so all that might have been learned was rapidly crushed.

Could such a thing happen today? Indeed yes, it is still going on, the scientific output from the Islamic world is more or less zero. Humans are smart and also curious, so regardless of belief or non-belief the scientific enterprise will quite naturally bubble to the surface of all human minds. Now please do not misunderstand me here, there is no such thing as “Muslim” science or “Christian” science, science is just that … “science”, it is a methodology. The problem today within many Islamic cultures is that there is an ongoing conflict, most still reject modern science, deem it corrupt and consider it incompatible with Islamic teachings, and advocate a strict following of Islamic teachings – so far this line of thought holds sway and dominates. But hope remains, others quite rightly see science as the only source of enlightenment and have advocated the complete adoption of modern science. In their view, the only remedy for the stagnation of Muslim societies would be the mastery of modern science and the replacement of the religious worldview by the scientific worldview. This is the where the battle lines have been drawn today and where there will be an ongoing conflict – the one great hope has been the rise of the Internet, it has opened the doors to a vast pool of knowledge that had been previously inaccessible. 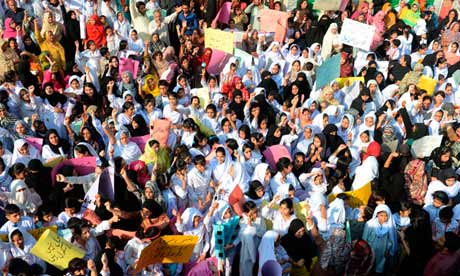 Now we have a tale of woe, a truly wretched story from Modern Pakistan about a Lahore girls’ school that has been burned to the ground and an astronomer’s family being arrested a few days ago.  (31st Oct) The picture here is of the girls protesting about what happened. Salman Hameed, director of the Centre for the Study of Science in Muslim Societies, writes about the entire sorry saga in the Guardian.

First, he describes the people involved …

I first met Umair Asim 15 years ago after an astronomy talk I gave in Lahore, Pakistan. He peppered me with questions about telescopes,astrophotography and the physics of stars. In the following years, Asim finished a masters degree in astronomy and went on to establish a sophisticated observatory on the roof of his house.

But what truly lights up Asim is his passion for public education. During the International Year of Astronomy (IYA) in 2009, Asim helped lead and organise numerous public observations in Lahore as well as in government schools in smaller cities and towns in Punjab. Wherever he went, he would bring his telescope with him. During IYA, it was a common sight to see Asim standing in front of an audience of 500, first explaining to them basic principles of astronomy and then entertaining long lines of people – from ages eight to 80 – to show them craters of the moon and rings of Saturn.

It is not hard to explain where his passion for public education comes from. His parents established Farooqi Girls’ High School 34 years ago. It is now considered one of the premier private schools in Lahore. Asim also serves as vice principal and I get emails from him when a student or students from the school would take top positions in the province-wide exams.

This is indeed a man to applaud, devoted to science and education, vice principle of a girls school, proud when his students do well, so what happened?

… on 31 October the school was burned to the ground by a crowd who had heard it was accused of blasphemy. Lab equipment and computers were looted. Hundreds of library books – obviously with little use to the mob – tossed into the fire. Some even tried to pull the marble tiles off the floor.

Blasphemy … a girls school!! really, so what actually happened?

The blasphemy accusations are not related to astronomy. Instead, they centre on a teacher at the school, Arfa Iftikhar. In a rush for the start of the Eid holiday, she accidentally missed a page while copying a homework assignment for the class. Her mistake merged a line about the prophet of Islam with the lines of a chapter on beggars. A parent of one of the students in her class noticed it, and the chatter of blasphemy spread quickly.

It did not matter that this was an unintentional mistake. In the current climate, it is comically easy to accuse someone of blasphemy in Pakistan. In fact, in this instance, the blame was also extended to the school administrators, including Asim.

The accused teacher is now in hiding and the police have arrested the 77-year-old principal of the school. He also happens to be Asim’s father, and his appeal for bail has been denied by the court. Asim and the rest of his family are now in “protective custody”.

Asim’s father, now sleeping on the floor of a jail cell, will have to cope with the fact that all the effort that he and his wife poured in for those past 34 years is gone.

And Asim – one of Pakistan’s brightest gems – must be wondering if he will ever feel safe in a country where he shared his love for astronomy with so many people.

Not everybody is a complete religious lunatic, Two days after the burning of the school, about 2,000 women – mostly former and current students – gathered near the school holding placards demanding the release of the principal and the reopening of the school. Will the school recover? Sadly, once you have been tarnished with a hint of Blasphemy within Pakistan today, it is almost impossible to ever be safe again.

One final point, this is not a story about belief vs non-belief, but rather illustrates the battle lines I previously mentioned between those who are embracing religious superstition and those who wish to embrace science and see a scientific worldview prevail, Asim and all his family are themselves pious Muslims.

Today religious superstition is manifesting itself within Pakistan in the form of the obnoxious and truly destructive Blasphemy laws that are slowly but surely ripping that society apart and laying waste to basic human decency and tolerance. It is not just the Pakistani minorities that are suffering, it is also impacting the Muslim community as well. That which they think will keep them safe, will in fact end up completely destroying them.

3 thoughts on “Religious Superstition vs Science … does it still happen? … sadly yes.”