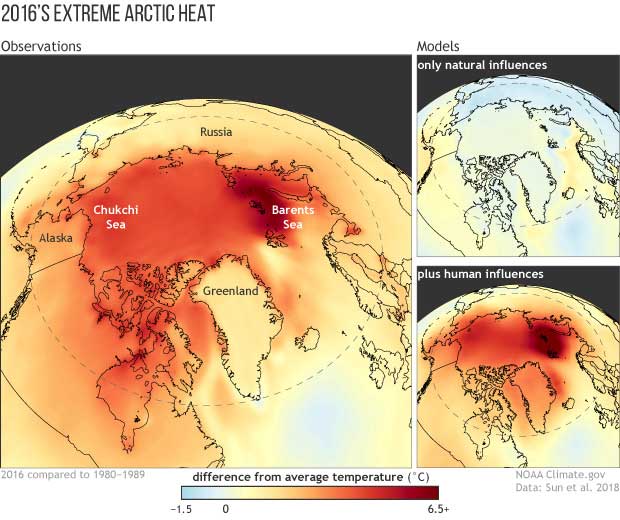 If you keep you finger on the Global Warming pulse then you will be familiar with the observations of record warmth in the Arctic during the winter of 2016. Research by NOAA has now confirmed that this was not a natural event, a black swan, and would not have been possible in a world without human caused global warming.

So what is this paper about?

They used a set of climate module simulations to determine what drove the record temperature increases north of 60°N that far exceeded the highest in the observational record since 1900.

Much of the magnitude of surface temperature anomalies averaged poleward of 65°N in 2016 (3.2 ± 0.6 °C above a 1980–89 reference) is shown to have been forced by observed global boundary conditions. The Factual experiments reveal that at least three quarters of the magnitude of 2016 annual mean Arctic warmth was forced, with considerable sensitivity to assumptions of sea ice thickness change. Results also indicate that 30–40% of the overall forced Arctic warming signal in 2016 originated from drivers outside of the Arctic. Despite such remote effects, the experiments reveal that the extreme magnitude of the 2016 Arctic warmth could not have occurred without consideration of the Arctic sea ice loss.

How sure are they about us being the root cause?

We find a near-zero probability for Arctic surface temperature to be as warm as occurred in 2016 under late-19th century boundary conditions, and also under 2016 boundary conditions that do not include the depleted Arctic sea ice. Results from the atmospheric model experiments are reconciled with coupled climate model simulations which lead to a conclusion that about 60% of the 2016 Arctic warmth was likely attributable to human-induced climate change.

We are no longer in the 19th Century

If greenhouse gas concentrations, ocean temperatures, and also the sea ice extent were at late 19th Century levels, then it would not have happened.

Since the 19th Century there have been very steep increases in CO2 without our atmosphere. This has led to ice loss. The loss of ice has two impacts.

The net effect of less ice is an Arctic that is warming almost twice as fast as the rest of the planet.The term used to describe this is “Arctic Amplification”.

How exactly did they explore this with Climate Models?

Once you have a model that simulates the actual observations, you can then use that same model to explore the forcing. For example, what happens if you crank back CO2, or sea surface temperatures, or the extent of the sea ice to levels from 1800 then run the same model?

What you find is that the extreme Arctic heat event does not happen.

“This kind of extreme heat did not happen in the simulations of  late 19th Century climate,These are temperatures the region could not experience without increased greenhouse gas loading and the loss in sea ice cover.”

The model they used was a widely used weather forecasting model. The researchers found that it could replicate 40 years of actual Arctic temperature observations and that includes the 2016 event. Once they had that, then it becomes possible to play with the parameters, and rerun it to see what then happens.

What Happens if you run the model forwards?

It turns out that the preverbal canary in a coal mine is telling us something. Dr Hoerling, making reference to the oft quoted canary, suggested that it chirped loudly in 2016. I grasp what he means, but it would perhaps be more apt to suggest that the carney had actually ceased chirping and was flat on its back coughing and gasping for breath in 2016.

2016 was a glimpse of what is to come … not in centuries, but instead within decades.

The conclusion to their paper highlights it like this …

While internal coupled processes undoubtedly contributed to the extreme magnitude of Arctic warmth in 2016, such a condition is projected to become the typical annual surface temperature within a mere decade, according to the CESM1 projections under an RCP8.5 emissions scenario (Fig. 6, bottom). Further, by the middle of the 21st century, the typical annually averaged Arctic surface temperature anomaly is projected to be nearly doubly that which occurred in 2016. This remarkable rate of warming in the Arctic is closely tied to the projected loss in Arctic sea ice (Jahn et al., 2016). Whereas the role of internal coupled variability was appreciable in explaining the 2016 event intensity, it is clear that by mid-21st Century the forced signal of warmth will far exceed the magnitude of internal variability.

For completeness, here is that Fig 6 they refer to. The top panel shows what has actually happened and the bottom one shows what comes next and when.

The non-scientific term for that is perhaps “Yikes!”.