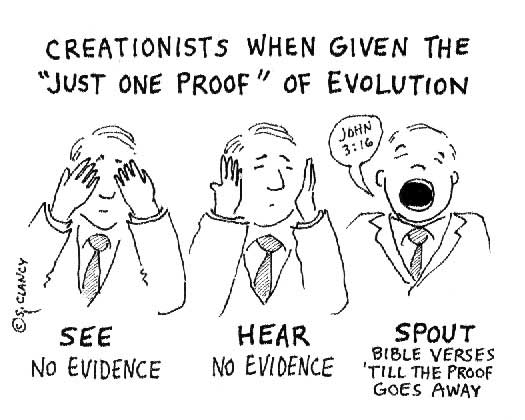 I don’t “believe” in evolution.

My position is not faith based, but instead is one in which I accept the evidence that the diversity of life is explained by natural selection and variation. What is quite fascinating is that there are many people who, despite the mountains of evidence, simply do not accept it. I’ve had very long detailed technical discussions with some who take that stance. It often leads to the discovery of several things. Firstly, those that reject the idea often don’t truly understand what it is that they are rejecting. Secondly, filling in that gap makes no difference, because facts don’t appear to matter.

While listening to this week’s Skeptics guide to the universe, one item that they mentioned was a recent study that looked into the topic of what people understood evolution to be and how well that aligned with their acceptance or rejection of it. So let’s take a brief look at that now to see what it tells us.

No Missing Link: Knowledge Predicts Acceptance of Evolution in the United States

Published in BioScience last February, it documents how researchers from the University of Pennsylvania measured how well individuals understood evolutionary biology.

In line with previous work in this area, our data show that participants with high levels of religiosity and conservative views are more likely to reject evolutionary theory.

… but they also discovered that those that rejected it did not understand it.

Importantly, however, we found that level of acceptance is not solely a result of these identity factors; knowledge of evolutionary theory also plays a significant role. Even when taking into account the participants’ level of religiosity and political conservatism, as well as their age, gender, and level of education, performance on our knowledge battery was still a significant predictor of their level of acceptance.

Is this study different?

In some respects yes it is. The participants, roughly 1,100, within this study were not just college students, but instead consisted of a broader wider demographic that was a far better representation of the whole population. The researchers were also very careful in how they worded the questions so that they could decouple personal feelings on the topic and measure the degree of understanding that people had.

The authors explain their goals as follows:

“The current study was designed to gain a more accurate view of how Americans think about evolutionary theory, with the particular goal of investigating whether individuals’ knowledge about the theory plays a significant role in their acceptance of it.”

The conclusion of the study was this …

“We find the traditional relationship between your religious beliefs and evolution, and between your political beliefs and evolution, but we also find that those are not the only factors that matter,” said Deena Weisberg, a senior fellow in Penn’s psychology department in the School of Arts and Sciences. “They do matter, but if you know more about evolutionary theory, if you understand it better, you’re more likely to accept it.”

While clearly having a very specific political and/or religious identity does play a role, it is fascinating that an actual understanding of the topic also factors in.

Wordcrafting – What are the details?

They very carefully started questions with terms such as “according to scientists” or “scientists would think.”, and so they can then measure what people understood and decouple that from an acceptance of the concepts.

No bland binary choices, but instead a spectrum was on offer with Creationism at one end, evolutionary biology at the other, and options in the middle. This reflects the reality of how things actually are within many minds. You can slice things up as follows, and so the questions needed to work out where people stood …

What types of questions were on offer to measure what people actually understood?

Well, here are a couple of examples of the actual questions they deployed …

A population of walleye fish eats worms and minnows. Minnows are fast and hard to catch, while worms are slow and easy to catch. Recently, a disease killed most of the worms, making food harder to find. What would a scientist think is likely to happen to the walleyes? Please check all that apply.
(Check all that apply, completely randomize order of answers)

As you can see, these are designed to tease out what people truly understand.

Of those asked, 68% “failed”. To put that another way, most really did not understand the subject at all.

So we can fix this by educating people on the topic … right?

Key Point – This is the skeptical bit

This study demonstrates a correlation between an understanding of the topic and an acceptance of it. It does not confirm that a deeper knowledge leads to acceptance. In fact, that arrow most probably points the other way. An acceptance leads people to be curious and so they gain a deeper better understanding.

The Penn article, and the study itself, suggests that we need better education and interventions to fill the knowledge gap, and so increase the level of acceptance. I’ve no argument against deploying better education, but personally I suspect that it would not address the issue. The fundamental problem may in fact be the existence of an emotional tribal stance that promotes anti-science as “truth”.

What do you know about Astrology and how it supposedly works?

Probably almost nothing because you also happen to know that it is BS and so you have no interest in investing any time in gaining an understanding it. In a similar manner, people who reject evolutionary biology will tend to be prone to closing their eyes and ears to a topic that they have falsely been led to believe is BS. Their only exposure, if any, will be via creationist misinformation.

Creationism is not scientific, but instead is a religious stance. This remains true even if you pretend it is scientific by masking out religious terms and call it Intelligent Design.

If you are not sure about that then ask yourself this. How exactly can you test this, how do you determine if something is or is not designed? There are claims that ID has published peer-reviewed papers within credible scientific journals, but dig into the details and you find it all very rapidly falls apart.