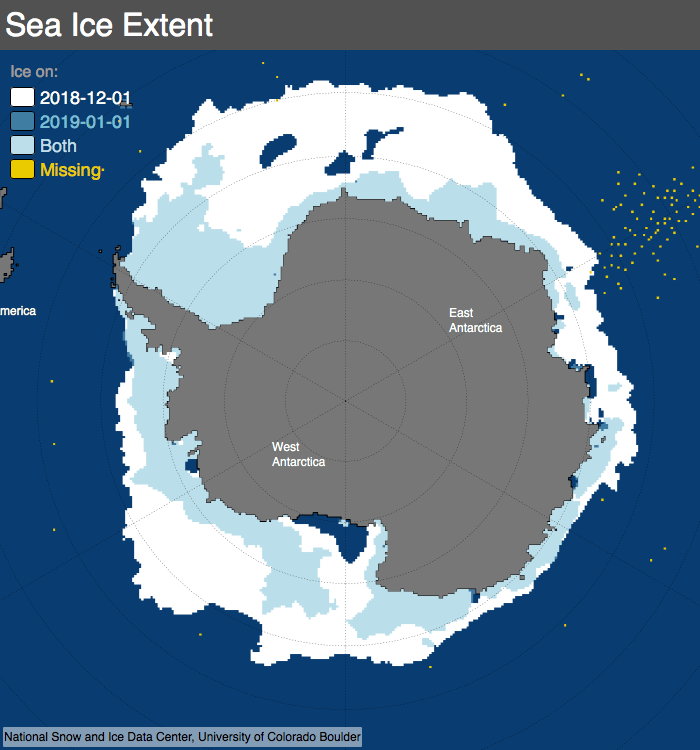 Since the 1970s we have a very accurate measurement via satellites of what is going on with the extent of the sea ice in both the Arctic and also the Antarctic. It is actually possible to look even further back by using ships records, for example Cook encountered a wall of sea ice when searching for the North West passage and recorded exactly where that was back in the 1700s, so we also know the extent of ice then no longer exists since about the 1990s.

What is the latest update?

NSIDC: A Record-low start to the new year in Antarctica

Right now the extent of the Sea Ice in the Antarctic is at a record low and we still have six to eight weeks of the melt season to go. It can of course rapidly change, but so far we are on track for yet another record low.

They report it as follows …

Words can be hard to truly grasp so let’s view. In the image below the orange line illustrates the satellite recorded average for Jan 2nd and contrasts that with where the sea ice is on Jan 2nd 2019. Clearly vast amounts of sea ice are now missing …

Another way of looking at the same data is to use a graph to compare the sea ice extent over a period of 5 months and contrast this year with previous years. What becomes clear from this is that 2018 was similar to last year, then in December there was some rapid ice loss that has resulted in a record low for this year …

Until now, 2016 was considered to be an extreme, but starting on 26th December the sea ice extent fell below that 2016 low extreme.

2016 appears to have been a turning point for something new happening with the Antarctic sea ice extent. Since 2016 it has remained below the average for the 40 year satellite record and now 2019 appears to be trending downwards once again.

This is most probably due to unusual atmospheric conditions and high sea surface temperatures. Unfortunately, due to the US government shutdown NSIDC don’t have access to the usual data sources to be able to confirm that at this point in time.

Will this new trend continue?

We simply do not know, but it is highly probable that it will.

“Antarctic sea ice extent is astonishingly low this year, not just near the Ross Ice Shelf, but around most of the continent,” says Cecilia Bitz, a polar scientist at the University of Washington.

In recent years, scientists have set up seismic monitoring stations on the ice shelfto track the wave energy as it percolates inland, potentially causing stress fractures on the Ross Ice Shelf along the way.

Bitz pointed to low ice concentration also happening right now in the Amundsen Sea, more than 1,000 miles away from Ross, and that’s potentially even more worrying. In a worst-case scenario, with continued business as usual greenhouse gas emissions, ice shelves all across West Antarctica could collapse within decades, melted from above and below and shattered by wave action.

After that, it would probably be just a matter of time before West Antarctica’s massive land-based glaciers, like the “Doomsday glaciers” at Thwaites and Pine Island, collapse as well, sending sea levels upward by as much as 10 feet and flooding every coastal city on Earth.

Six to eight weeks remain in the Antarctic melt season. Will the record low daily extents now being seen persist and lead to a record seasonal minimum? We don’t yet know, but that’s now very probable.