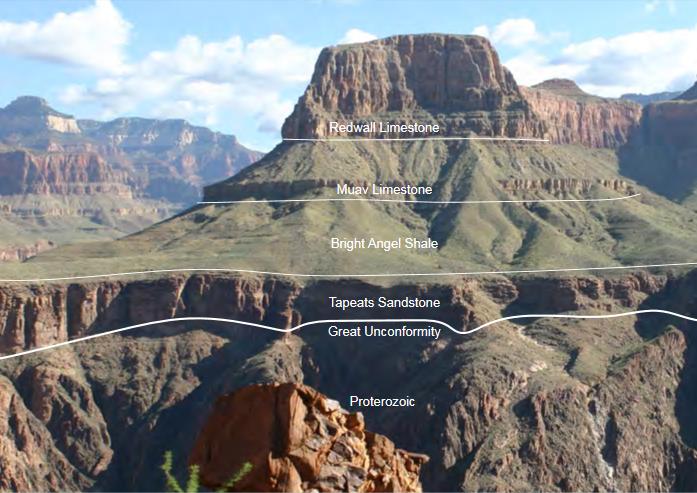 There exists something in geology known as “The Great Unconformity”. This is the observation that there appears to be a gap that appears to consistently exist for specific geological layers around the planet.

What exactly is this Great Unconformity?

The first observation of this was made in 1869 by John Powell at the Grand Canyon. As you go further down into the canyon you are going further back in time and so you can see the various layers exposed. When you get to the sandstone of the Cambrian age (~550 m.y. old) then what comes next are the vertically foliated metamorphic and igneous rocks of the Vishnu Basement Rocks that are 1.7 billion year old.

Between them is a huge gap; a rather large chunk of geological history is missing.

Is this just the Grand Canyon?

Apparently not (you can read more about it here) So where did this rather large slice of geological history go?

There is a new study that proposes an answer.

Here we show that the Great Unconformity is associated with a set of large global oxygen and hafnium isotope excursions in magmatic zircon that suggest a late Neoproterozoic crustal erosion and sediment subduction event of unprecedented scale. These excursions, the Great Unconformity, preservational irregularities in the terrestrial bolide impact record, and the first-order pattern of Phanerozoic sedimentation can together be explained by spatially heterogeneous Neoproterozoic glacial erosion totaling a global average of 3–5 vertical kilometers, along with the subsequent thermal and isostatic consequences of this erosion for global continental freeboard.

OK, let’s put all that another way. The idea here is that when the planet was in the grip of a recent “Snowball Earth” event about 650 million years ago, a time where the entire planet was frozen, then that resulted in huge glaciers to smashed up the missing layers, and transported it all into the slush ocean.

There is no avoiding the skepticism that this will generate within the geological community, it is quite a claim …

“I think, though, we have extraordinary evidence to support that extraordinary claim,” says study leader C. Brenhin Keller, a postdoctoral fellow at the Berkeley Geochronology Center.

Is Snowball Earth accepted as fact?

Snowball Earth explains rather a lot of geological observations, but is not wholly nailed down and aspects of it are still disputed. It is however starting to be accepted more and more.

So what exactly does this paper add to the conversation?

The secret sauce here is a rather detailed analysis of Zircon samples. They can be used as a window into what has been going on because they survive geological processes and can also be dated.

It essence, the paper concludes as follows (the emphases added in mine) …

Considering the glacigenic model for the Great Unconformity proposed here, zircon Hf and O isotopes may represent the first paleoerosion proxy preserved in Earth’s igneous record, preserving a signal of surface earth processes over billion-year timescales. In this context, we note that a set of smaller but correlated Paleoproterozoic excursions in the zircon Hf and O isotope records circa 2.2 Ga appears following a known period of Paleoproterozoic glaciation (83). Given the lack of geologic evidence for glacial deposits between the ∼2.2-Ga Rietfontein (83) and ∼0.72-Ga Sturtian (37) glaciations, Earth may have experienced a prolonged period of weathering and regolith development (84) with comparatively little marine sediment accumulation on the continents due to a lack of glaciation-derived accommodation space. Thus, Neoproterozoic global glaciation may have been responsible for initiating a Phanerozoic cycle of continental sedimentation with enhanced Paleozoic continental inundation and sediment accumulation relative to the preceding late Proterozoic. We conclude that the Phanerozoic sedimentary record is best explained by a Great Unconformity of inherently coupled erosive and constructive genesis, with Neoproterozoic glacial erosion governing the subsequent history of continental freeboard and sediment accumulation (Fig. 4B). As such, the environmental and geochemical changes that led to the diversification of multicellular animals (5) may be considered a direct consequence of Neoproterozoic glaciation.

I’ve highlighted a few words above. Note that what they are doing is suggesting a conclusion with an appropriate degree of doubt. Alas some of the media stories have run with this as a done deal. It is always wise to remember that a published paper like this is part of an ongoing conversation amongst the subject matter experts and not a definitive declaration of truth.

It is a fascinating hypothesis that potentially explains the Great Unconformity, but beyond that, the last line above is something to mull over as well. This proposed event precedes the Cambrian Explosion of complex multicellular life, and so they suggest that the sudden emergence of multicellular life may have been triggered by this global glaciation.

Other Lines of Evidence

There are other things that point towards all of this …

It is indeed a plausible idea that is quite fascinating, and yet is also very much debatable. It will be interesting to see how the winder community responds to it.

National Geographic go into all of it in great detail.

Inevitably there are other wild ideas concerning the Great Unconformity. One is the suggestion that it was caused by a great flood as described in the bible.

Er … no, seriously just no, and with good reason.