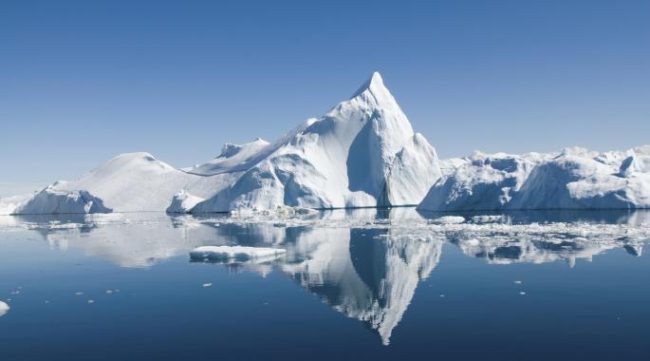 Towards the beginning of the month it looked as if we had indeed reached an astonishing new low ice extent record in the arctic, but it really was too early to make that cal then. Well the news is that the National Snow and Ice Data Centre have called it …

Arctic sea ice appears to have reached its annual maximum extent on March 7. This is the lowest maximum in the 38-year satellite record. NSIDC will post a detailed analysis of the 2016 to 2017 winter sea ice conditions in our regular monthly post in early April.

To illustrate that point, here is the NSIDC data in the arctic sea ice extent for 22nd March that appears to indeed confirm that the winter maximum has passed. 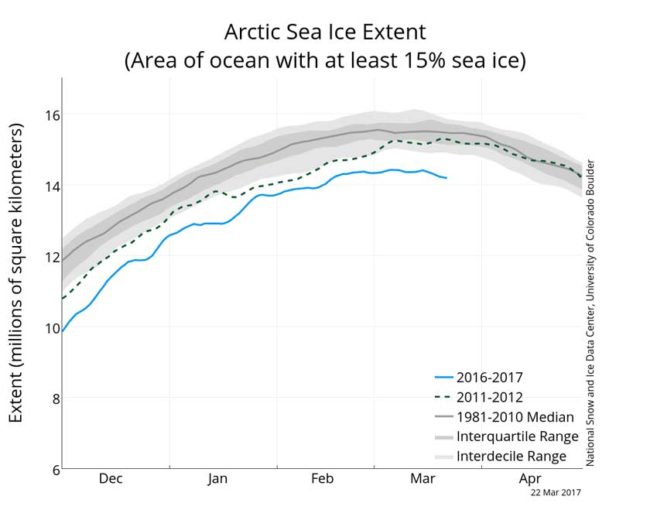 Rather obviously this news is not good. A new record low for the maximum at a new earlier date places us on the road to even less. From now until about September the ice will retreat and expose even more darker ocean, and that can then more easily absorb more energy from the sun. White ice reflects, darker ocean absorbs, so this is a feedback loop. It is not the principle driver for the ice retreating but instead is one of the various mechanisms that contribute to the acceleration of sea ice loss.

Chris Mooney has also been writing within the Washington Post with some further Arctic updates. That highlights details that often get skipped over when such records are noted. There are three key things to highlight there.

Extremely low ice at this time of year may partly reflect the fact that over the course of the winter of 2016-2017, the Arctic region was buffeted by very strange weather. “Overall warm conditions were punctuated by a series of extreme heat waves over the Arctic Ocean,” the center reports.

On top of all of that, the overall thickness or volume of Arctic sea ice is also at a record low right now, according to researchers at the Polar Science Center at the University of Washington in Seattle, and this is possibly an even more important observation. If the ice emerges from winter in a particularly thin state, then it has less of a chance of staying frozen throughout the remainder of the year as temperatures rise.

The loss of this “multiyear ice” in the Arctic — ice that lasts in a frozen state for more than a year — is one factor that’s probably driving the decline of Arctic sea ice overall.

It isn’t just the Arctic, either. From pole to pole, floating sea ice has been at extremely low levels in recent months. In the Antarctic summer, it recently plunged to a record low, also based on National Snow and Ice Data Center satellite data sets dating to 1979.

To illustrate just how radically things are changing, here is a small bit of additional news. For centuries explorers sought a navigable Northwest passage and failed because pack ice blocked it. That was the way it was even in summer.

This has now changed.

The Crystal Serenity cruise ship is planning its second summer voyage through the Northwest Passage  later this year, ferrying passengers on a month-long journey between Alaska and New York. Such a voyage was once not possible, but global warming has now changed that.

These two photos from the same spot in the #Arctic say it all: #ClimateChange is Real. Incredible #SaveTheArctic @Greenpeace pic.twitter.com/PVvTymU700

Both #Arctic and #Antarctic sea ice extents remain at record lows for the date (satellite era). Seems like my tweets are just on repeat. pic.twitter.com/O7i736APJP