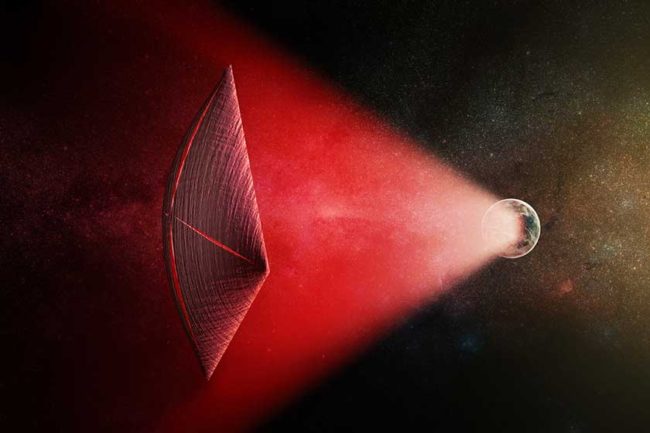 A press release issued by the Harvard-Smithsonian Center for Astrophysics has generated a considerable quantity of media fodder. Stories have been popping up all over the place about the idea proposed, and some highly reputable sources have been joining in. For example New Scientist magazine jumped into the fray with this …

Are alien radio beams causing one of the most mysterious signals from space? A new study by Manasvi Lingam and Avi Loeb at Harvard says that fast radio bursts (FRBs) could come from extraterrestrial radio beams being used as beacons or to power alien light sails.

The source of FRBs, which are milliseconds-long but incredibly bright pulses of radio waves, have intrigued and mystified astronomers for years – and this isn’t the first time aliens have been suggested.

What? They found aliens?

No. There is no evidence that FRBs come from aliens.

They then go out to outline the information contained within the press release with a degree of some wholly appropriate skepticism. No all the stories were like that and so as you might anticipate, the tabloid end of the market took it all and ran with “aliens”.

OK, so let’s take a look at all of this and see what we find.

What is a Fast Radio Burst?

As the name implies, fast radio bursts are millisecond-long flashes of radio emission. First discovered in 2007, fewer than two dozen have been detected by gigantic radio telescopes like the Parkes Observatory in Australia or the Arecibo Observatory in Puerto Rico. They are inferred to originate from distant galaxies, billions of light-years away.

“Fast radio bursts are exceedingly bright given their short duration and origin at great distances, and we haven’t identified a possible natural source with any confidence, An artificial origin is worth contemplating and checking.”

– theorist Avi Loeb of the Harvard-Smithsonian Center for Astrophysics.

What has been speculated?

Loeb and his co-author Manasvi Lingam (of Harvard University) have speculated about the feasibility of creating a radio transmitter strong enough for it to be detectable across such immense distances. Via a bit of maths, they found that if the transmitter were solar powered, the sunlight falling on an area of a planet twice the size of the Earth would be enough to generate the needed energy.

Obviously we can’t build anything like this, but such a construction would not break any of the laws of physics.

They also asked themselves if the tremendous energies involved would melt any underlying structure. Again, they found that a water-cooled device twice the size of Earth could withstand the heat.

Finally they asked, why build such an instrument in the first place? They argue that the most plausible use of such power is driving interstellar light sails. The amount of power involved would be sufficient to push a payload of a million tons, or about 20 times the largest cruise ships on Earth.

Please do not forget that all this is just speculation.

What do we actually know?

Is the only source of information we have regarding this speculation the Harvard press release? Actually no, it has also been written up in a paper that has been accepted for publication.

There they make it abundantly clear that this paper is simply speculation, a “what if”, and they conclude as follows  …

In this Letter, we have posited that Fast Radio Bursts are beams set up by extragalactic civilizations to poten- tially power light sails.

In Section 2, we showed that the FRB parameters were consistent with the assumption that they are artificial beams.

… Although the possibility that FRBs are produced by extragalactic civilizations is more speculative than an astrophysical origin, quantifying the requirements necessary for an artificial origin serves, at the very least, the important purpose of enabling astronomers to rule it out with future data.

There are a few problems here

This is the skeptical bit.

The source for FRBs is apparently all over the sky. If it was all coming from just one galaxy then that would indeed suggest something rather unique about that one galaxy. Instead we see them coming from many different galaxies. If the speculation was correct then it would suggest that many different extragalactic species were using light sails in a very similar manner.

Let’s assume that the source of an FRB was an exceptionally rare but wholly natural cosmological event that we do not understand. We can perhaps also speculate that whatever it is, it happens just once every million years within just one of a set of one million galaxies. Given the observation that there are at least 2 trillion galaxies, then once in a million years per one million galaxies would still yield several FRBs being observed every year. (Hat tip to Steven Novella for that example).

The universe is vast, so vast that exceptionally rare cosmological events will pop up on a regular basis. A couple of times per year is the observed FRB rate since first observed in 2007.

What we actually have here is a pattern of human behaviour.

When something mysterious and unknown is observed, some immediately attribute it to have been caused by an entity, in this case aliens. A recent example of this was the serious speculation in 2015 that aliens had constructed a Dyson sphere around a star. (Hint: no).

The pattern is not media specific, nor  modern, but is truly ancient. When our distant ancestors first looked up and began the speculate about the sun, moon and stars, they had no understanding of what they were seeing, it was all a mysterious unknown. They eventually settled for the conclusion that these were gods or manifestations of the actions of gods. This pattern keep repeating; something unknown or mysterious pops up and some leap to the conclusion that gods, or aliens, or some supernatural entity, is doing it.

We have been naturally selected to behave like this because it gave our ancestors a distinct survival advantage. Imagine if you will our ancestors out on the savanna grasslands long ago. A rustling is heard … those that immediately leap to the conclusion that it has been caused by an entity, a predator, pause and flee to safety, and so survive. Those that attribute it to wind become lunch for a predator.If it was wind, then it is not a problem either way, but if it was a predator, then only one group will survive.

Understanding that we are naturally prone to doing this helps us to become appropriately skeptical when such speculation pops up.

It is of course fine to speculate, but we should also recognise that the number of times that “aliens”, “god” or “ghost” turned out to be the right answer has so far proven to be zero.

I don’t know and neither does anybody else … yet. It is of course a possibility we should consider, but not to the exclusion of far simpler more natural explanations. Until we have evidence, then the only truly viable comment on this is “I don’t know, let’s go and find out”.