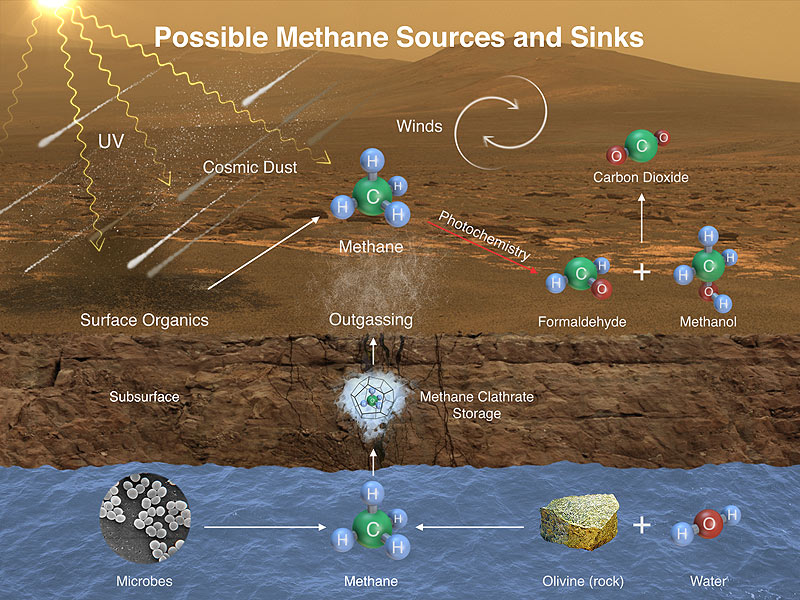 The possibility of life on MARS has just been given another uptick. Nothing certain is known. Instead what has happened is the publication of a new study within Nature Geoscience that independently confirms a previous observation regarding Methane.

Naturally this his driven a great deal of speculation regarding the source of the Methane. Is it natural or is this evidence of life?

On earth we know that Methane can be emitted by either life or via natural processes.

What does the new Study Add?

Well yes. What they did was to look at the data gathered by the Spectrometer on the Mars Express that was in orbit at the time. They report …

Methane was not detected in other orbital passages.

This was just one day after the date of detection by the Curiosity rover in the same area back in 2013.

We perform ensemble simulations of the Martian atmosphere, using stochastic gas release scenarios to identify a potential source region east of Gale Crater. Our independent geological analysis also points to a source in this region, where faults of Aeolis Mensae may extend into proposed shallow ice of the Medusae Fossae Formation and episodically release gas trapped below or within the ice. Our identification of a probable release location will provide focus for future investigations into the origin of methane on Mars.

Block E8 is singled out, as it contains multiple faults and fault intersections of Aeolis Mensae, along with possible extensions of those faults into proposed shallow ice in the overlying MFF. Such ice could have sealed subsurface methane, and recent reactivation of Aeolis Mensae/dichotomy faults could have penetrated the ice, episodically opening enhanced release pathways.

Below is the geological context. Black dots represent sites with water-equivalent hydrogen >26%. The dark red line shows the outline of the lower member of the MFF. The green line shows aligned knobs. Black arrows highlight Aeolis Mensae outcrops within the MFF.

The yellow triangle is the Curiosity rover location.

They don’t explain the actual origin of the detected Methane. Instead, this is another step on the road to understanding this by not only independently confirming the Methane detection, but also pointing towards the location it is coming from.

Both the Mars 2020 rover and ESA’s (European Space Agency’s) ExoMars rover (also in 2020) will be on stage soon, and this all helps them to determine where to look.

Meanwhile nobody is sitting just waiting, there is work to be done. The entire dataset captured by the Spectrometer on the Mars Express will need to be reanalysed and also the ongoing monitoring of potential Methane sites will continue.

Marco Giuranna of the National Institute of Astrophysics in Rome …

Our finding constitutes the first independent confirmation of a methane detection…

Remarkably, we saw that the atmospheric simulation and geological assessment, performed independently of each other, suggested the same region of provenance of the methane, which is situated about 500km east of Gale