In my own mind, that however still does not quite cut it as a complete answer, and so I’m taking a bit of time in this posting to dig into the precise cause a bit more.

What is well understood is that the Arctic has been warming at an unprecedented rate. If you check the 2016 Arctic report card then you can read up on all the observed and measured details of that.

Circling the Arctic are the Polar Vortex winds. These keep the cold frigid Arctic air in the Arctic, but when this system weakens then the cold comes south. The warming Arctic is leading to a weakening of the Polar Vortex and so the US this year, and Eurasia last year, experienced record breaking cold snaps.

Variations in the vortex are natural, but recent research reveals that the periods of weakness are starting to last longer.

Over the last decades, the stratospheric polar vortex has shifted towards more frequent weak states which can explain Eurasian cooling trends in boreal winter in the era of Arctic amplification.

The extra-tropical stratosphere in boreal winter is characterized by a strong circumpolar westerly jet, confining the coldest temperatures at high latitudes. The jet, referred to as the stratospheric polar vortex, is predominantly zonal and centered around the pole; however, it does exhibit large variability in wind speed and location. Previous studies showed that a weak stratospheric polar vortex can lead to cold-air outbreaks in the mid-latitudes but the exact relationships and mechanisms are unclear. Particularly, it is unclear whether stratospheric variability has contributed to the observed anomalous cooling trends in mid-latitude Eurasia. Using hierarchical clustering, we show that over the last 37 years, the frequency of weak vortex states in mid to late winter (January and February) has increased which were accompanied by subsequent cold extremes in mid-latitude Eurasia. For this region 60% of the observed cooling in the era of Arctic amplification, i.e. since 1990, can be explained by the increased frequency of weak stratospheric polar vortex states, a number which increases to almost 80% when El Niño/Southern Oscillation (ENSO) variability is included as well.

While the paper has the extreme cold-snap in Eurasia last year in focus, what happened there is now happening in the US this year.

Here is a diagram of this from NOAA … 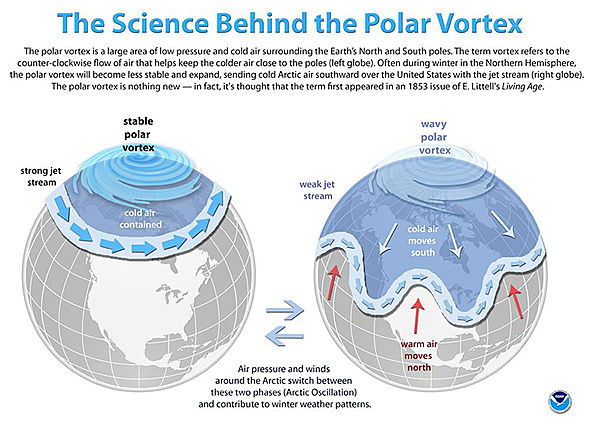 There was an associated press release for the study with further details. It explains this mechanism as follows …

Despite global warming, recent winters in the Northeastern US, Europe and especially Asia were anomalously cold – some regions like Western Siberia even show a downward temperature trend in winter. In stark contrast, the Arctic has been warming rapidly. Paradoxically, both phenomena are likely linked: When sea-ice North of Scandinavia and Russia melts, the uncovered ocean releases more warmth into the atmosphere and this can impact the atmosphere up to about 30 kilometers height in the stratosphere disturbing the polar vortex. Weak states of the high-altitude wind circling the Arctic then favors the occurrence of cold spells in the mid-latitudes.

Comments by the Study authors

The study’s lead author, Marlene Kretschmer, a climate scientist with the Potsdam Institute for Climate Impact Research, explains their results as follows …

“The shift toward more persistent weaker states of the polar vortex lets Arctic air spill out and threaten Russia and Europe with extreme cold, The trend can explain most of the cooling of Eurasian winters since 1990.”

“Our latest findings not only confirm the link between a weak polar vortex and severe winter weather, but also calculated how much of the observed cooling in regions like Russia and Scandinavia is linked to the weakening vortex. It turns out to be most, Several types of weather extremes are on the rise with climate change, and our study adds evidence that this can also include cold spells, which is an unpleasant surprise for these regions.

“It is very important to understand how global warming affects circulation patterns in the atmosphere, Jet Stream changes can lead to more abrupt and surprising disturbances to which society has to adapt. The uncertainties are quite large, but global warming provides a clear risk given its potential to disturb circulation patterns driving our weather – including potentially disastrous extremes.”

Record-breaking cold snaps do not happen despite the reality of a warming world. Instead they are happening more frequently and more intensely because the warming is leading to a disruption of the Polar Vortex.

A Sept 2017 “Inside Climate News” article covers all this here.