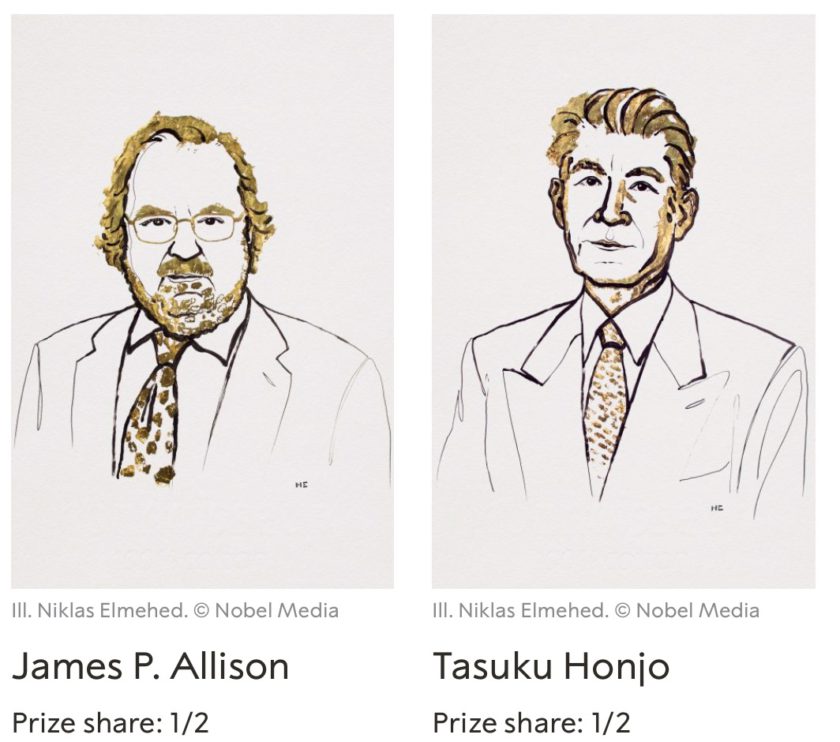 Once again the time of year when the most prestigious award, the Nobel Prize, spotlights individuals who have contributed to our understanding.

The Nobel Prize in Physiology or Medicine 2018 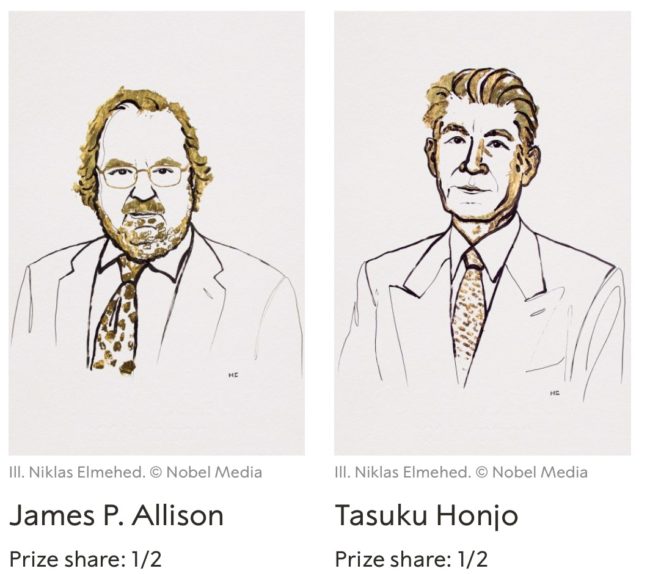 The Nobel Prize in Physiology or Medicine 2018 was awarded jointly to James P. Allison and Tasuku Honjo “for their discovery of cancer therapy by inhibition of negative immune regulation.”

Cancer kills millions of people every year and is one of humanity’s greatest health challenges. By stimulating the inherent ability of our immune system to attack tumor cells this year’s Nobel Laureates have established an entirely new principle for cancer therapy.

James P. Allison studied a known protein that functions as a brake on the immune system. He realized the potential of releasing the brake and thereby unleashing our immune cells to attack tumors. He then developed this concept into a brand new approach for treating patients.

In parallel, Tasuku Honjo discovered a protein on immune cells and, after careful exploration of its function, eventually revealed that it also operates as a brake, but with a different mechanism of action. Therapies based on his discovery proved to be strikingly effective in the fight against cancer.

Allison and Honjo showed how different strategies for inhibiting the brakes on the immune system can be used in the treatment of cancer. The seminal discoveries by the two Laureates constitute a landmark in our fight against cancer.

Can our immune defense be engaged for cancer treatment?

Cancer comprises many different diseases, all characterized by uncontrolled proliferation of abnormal cells with capacity for spread to healthy organs and tissues. A number of therapeutic approaches are available for cancer treatment, including surgery, radiation, and other strategies, some of which have been awarded previous Nobel Prizes. These include methods for hormone treatment for prostate cancer (Huggins, 1966), chemotherapy (Elion and Hitchins, 1988), and bone marrow transplantation for leukemia (Thomas 1990). However, advanced cancer remains immensely difficult to treat, and novel therapeutic strategies are desperately needed.

In the late 19th century and beginning of the 20th century the concept emerged that activation of the immune system might be a strategy for attacking tumor cells. Attempts were made to infect patients with bacteria to activate the defense. These efforts only had modest effects, but a variant of this strategy is used today in the treatment of bladder cancer. It was realized that more knowledge was needed. Many scientists engaged in intense basic research and uncovered fundamental mechanisms regulating immunity and also showed how the immune system can recognize cancer cells. Despite remarkable scientific progress, attempts to develop generalizable new strategies against cancer proved difficult.

Accelerators and brakes in our immune system

The fundamental property of our immune system is the ability to discriminate “self” from “non-self” so that invading bacteria, viruses and other dangers can be attacked and eliminated. T cells, a type of white blood cell, are key players in this defense. T cells were shown to have receptors that bind to structures recognized as non-self and such interactions trigger the immune system to engage in defense. But additional proteins acting as T-cell accelerators are also required to trigger a full-blown immune response (see Figure). Many scientists contributed to this important basic research and identified other proteins that function as brakes on the T cells, inhibiting immune activation. This intricate balance between accelerators and brakes is essential for tight control. It ensures that the immune system is sufficiently engaged in attack against foreign microorganisms while avoiding the excessive activation that can lead to autoimmune destruction of healthy cells and tissues.

A new principle for immune therapy

During the 1990s, in his laboratory at the University of California, Berkeley, James P. Allison studied the T-cell protein CTLA-4. He was one of several scientists who had made the observation that CTLA-4 functions as a brake on T cells. Other research teams exploited the mechanism as a target in the treatment of autoimmune disease. Allison, however, had an entirely different idea. He had already developed an antibody that could bind to CTLA-4 and block its function (see Figure). He now set out to investigate if CTLA-4 blockade could disengage the T-cell brake and unleash the immune system to attack cancer cells. Allison and co-workers performed a first experiment at the end of 1994, and in their excitement it was immediately repeated over the Christmas break. The results were spectacular. Mice with cancer had been cured by treatment with the antibodies that inhibit the brake and unlock antitumor T-cell activity. Despite little interest from the pharmaceutical industry, Allison continued his intense efforts to develop the strategy into a therapy for humans. Promising results soon emerged from several groups, and in 2010 an important clinical study showed striking effects in patients with advanced melanoma, a type of skin cancer. In several patients signs of remaining cancer disappeared. Such remarkable results had never been seen before in this patient group.

Discovery of PD-1 and its importance for cancer therapy

In 1992, a few years before Allison’s discovery, Tasuku Honjo discovered PD-1, another protein expressed on the surface of T-cells. Determined to unravel its role, he meticulously explored its function in a series of elegant experiments performed over many years in his laboratory at Kyoto University. The results showed that PD-1, similar to CTLA-4, functions as a T-cell brake, but operates by a different mechanism (see Figure). In animal experiments, PD-1 blockade was also shown to be a promising strategy in the fight against cancer, as demonstrated by Honjo and other groups. This paved the way for utilizing PD-1 as a target in the treatment of patients. Clinical development ensued, and in 2012 a key study demonstrated clear efficacy in the treatment of patients with different types of cancer. Results were dramatic, leading to long-term remission and possible cure in several patients with metastatic cancer, a condition that had previously been considered essentially untreatable.

Immune checkpoint therapy for cancer today and in the future

After the initial studies showing the effects of CTLA-4 and PD-1 blockade, the clinical development has been dramatic. We now know that the treatment, often referred to as “immune checkpoint therapy”, has fundamentally changed the outcome for certain groups of patients with advanced cancer. Similar to other cancer therapies, adverse side effects are seen, which can be serious and even life threatening. They are caused by an overactive immune response leading to autoimmune reactions, but are usually manageable. Intense continuing research is focused on elucidating mechanisms of action, with the aim of improving therapies and reducing side effects.

Of the two treatment strategies, checkpoint therapy against PD-1 has proven more effective and positive results are being observed in several types of cancer, including lung cancer, renal cancer, lymphoma and melanoma. New clinical studies indicate that combination therapy, targeting both CTLA-4 and PD-1, can be even more effective, as demonstrated in patients with melanoma. Thus, Allison and Honjo have inspired efforts to combine different strategies to release the brakes on the immune system with the aim of eliminating tumor cells even more efficiently. A large number of checkpoint therapy trials are currently underway against most types of cancer, and new checkpoint proteins are being tested as targets.

For more than 100 years scientists attempted to engage the immune system in the fight against cancer. Until the seminal discoveries by the two laureates, progress into clinical development was modest. Checkpoint therapy has now revolutionized cancer treatment and has fundamentally changed the way we view how cancer can be managed.

“It’s the dream of a lifetime. I’m just stunned.“

We reached out to James P Allison while he was celebrating his #NobelPrize with friends in a hotel room in New York. Listen to the full telephone interview:https://t.co/ogmWzoxMkl

Just in! Nobel Laureate Tasuku Honjo, surrounded by his team at Kyoto University, immediately after hearing the news that he had been awarded the 2018 #NobelPrize in Physiology or Medicine. pic.twitter.com/8TdlnXiSLe

Two scientists won the Nobel Prize in medicine for their work on cancer immunotherapy. Here's a visual explanation for how immunotherapy works: https://t.co/BLBDfhLGKm pic.twitter.com/ijzlI5NuLe

James P. Allison wins 2018 Nobel Prize in Physiology and Medicine with Tasuku Honjo. Last month, we spoke to Dr. Allison about the revolution in cancer treatments that he helped spark. https://t.co/RCf29jJHGl [Sponsored by @jnjinnovation] #ChampionsofScience pic.twitter.com/hta8CUUjbf