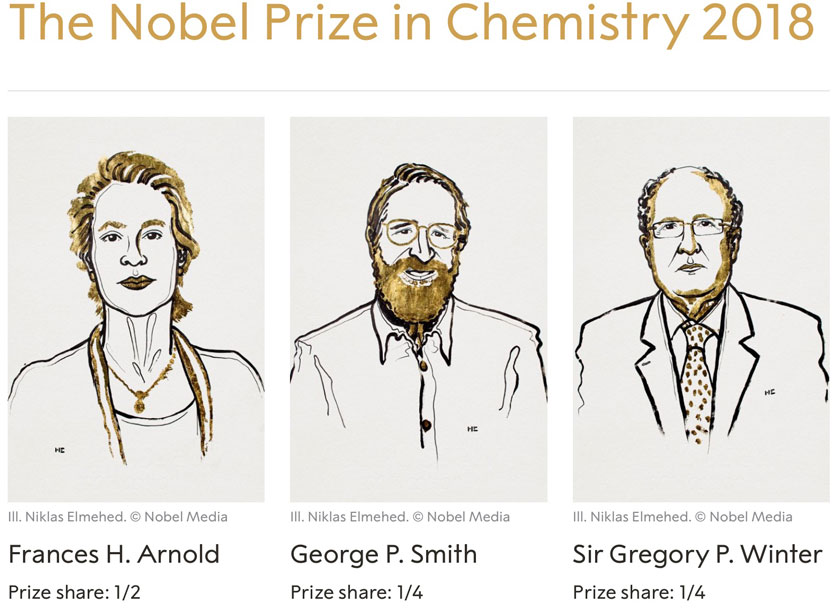 Today it is the 3rd of the 4 Nobel awards scheduled for announcement this week – Chemistry. This one is interesting for three reasons.

Those who did not win .. but should have.

Dmitri Mendeleev created the periodic table, and so was perhaps the ideal candidate for the Nobel prize in Chemistry, but alas he was never granted it. In 1906 he apparently came within one vote of getting it. Since he unfortunately passed away in 1907 it became too late (one Nobel rule is that only the living can receive a Nobel).

It perhaps highlights how subjective awards can be. Not granting it to him was very much down to just one dissenter on the Nobel Committee who disagreed with his work. History now reveals that whoever that was really got this wrong because the periodic table still stands today.

Those who did win … and really should not have.

In 1918 the Nobel Prize in Chemistry was given to Fritz Haber. He got the prize for his invention of the Haber-Bosch process, the method used in industry to synthesize ammonia from nitrogen and hydrogen gases, and that was then used for the large-scale synthesis of explosives. Now do remember that this award was given in 1918, a rather notable date that had seen the deployment of explosives on an industrial scale during the previous four years. Nobel himself decided to dedicate his entire fortune for the prize in his will when he read a premature obituary which condemned him for profiting from the sales of arms, so yes, awarding Nobel’s prize to a chap for coming up with a way to synthesise explosives just at the end of World War 1 was more than a little bit controversial.

However, that was not the primary issue. The core shock value here is that Mr Haber was the “father of chemical warfare” and had at that time spent many years pioneering the weaponising of chlorine and other poisonous gases during World War I. He was not simply some backroom boffin who dreamed up such stuff without fully understanding the consequences, he was on the front line with the rank of captain. There he vigorously promoted the use of, and personally deployed, chemical weapons despite the fact that Germany had signed the Hague Convention of 1907 that banned their use. His wife was so shocked at his actions during the war that she ended up shooting herself with his service revolver in 1915. He was not a nice guy. When the award was announced it left everybody thinking “WTF”.

The Chemistry Award is not actually just Chemistry

One problem with awards for very specific categories is that our understanding of reality has greatly advanced into areas that simply did not exist when Nobel established his prize in 1895. The constraint is the precise wording of his will, and so biology has no prize.

To address this, the Nobel committee has intrepreted “Chemistry” to also include within its scope things such as biochemistry, molecular biology, and also materials science, hence in the context of the award, “Chemistry” is not just chemistry.

This is well illustrated by this year’s award. 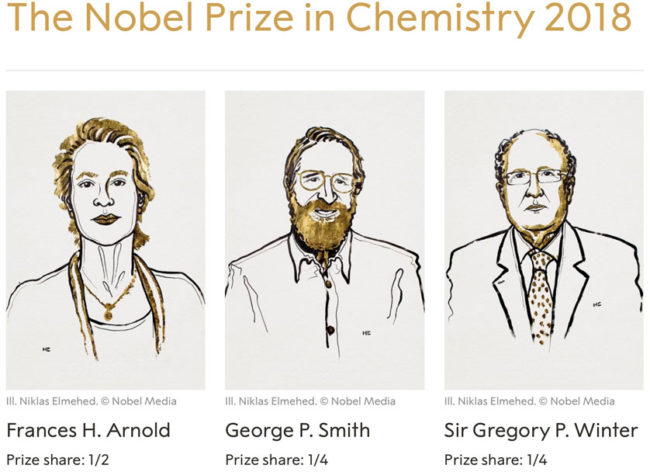 “for the directed evolution of enzymes”

“for the phage display of peptides and antibodies”

They harnessed the power of evolution

The power of evolution is revealed through the diversity of life. The 2018 Nobel Laureates in Chemistry have taken control of evolution and used it for purposes that bring the greatest benefit to humankind. Enzymes produced through directed evolution are used to manufacture everything from biofuels to pharmaceuticals. Antibodies evolved using a method called phage display can combat autoimmune diseases and in some cases cure metastatic cancer.

Since the first seeds of life arose around 3.7 billion years ago, almost every crevice on Earth has filled with different organisms. Life has spread to hot springs, deep oceans and dry deserts, all because evolution has solved a number of chemical problems. Life’s chemical tools – proteins – have been optimised, changed and renewed, creating incredible diversity.

This year’s Nobel Laureates in Chemistry have been inspired by the power of evolution and used the same principles – genetic change and selection – to develop proteins that solve mankind’s chemical problems.

One half of this year’s Nobel Prize in Chemistry is awarded to Frances H. Arnold. In 1993, she conducted the first directed evolution of enzymes, which are proteins that catalyse chemical reactions. Since then, she has refined the methods that are now routinely used to develop new catalysts. The uses of Frances Arnold’s enzymes include more environmentally friendly manufacturing of chemical substances, such as pharmaceuticals, and the production of renewable fuels for a greener transport sector.

The other half of this year’s Nobel Prize in Chemistry is shared by George P. Smith and Sir Gregory P. Winter. In 1985, George Smith developed an elegant method known as phage display, where a bacteriophage – a virus that infects bacteria – can be used to evolve new proteins. Gregory Winter used phage display for the directed evolution of antibodies, with the aim of producing new pharmaceuticals. The first one based on this method, adalimumab, was approved in 2002 and is used for rheumatoid arthritis, psoriasis and inflammatory bowel diseases. Since then, phage display has produced anti-bodies that can neutralise toxins, counteract autoimmune diseases and cure metastatic cancer.

We are in the early days of directed evolution’s revolution which, in many different ways, is bringing and will bring the greatest benefit to humankind.

The illustrations are free to use for non-commercial purposes. Attribute ”©Johan Jarnestad/The Royal Swedish Academy of Sciences”

They capture the essence of it all rather well … 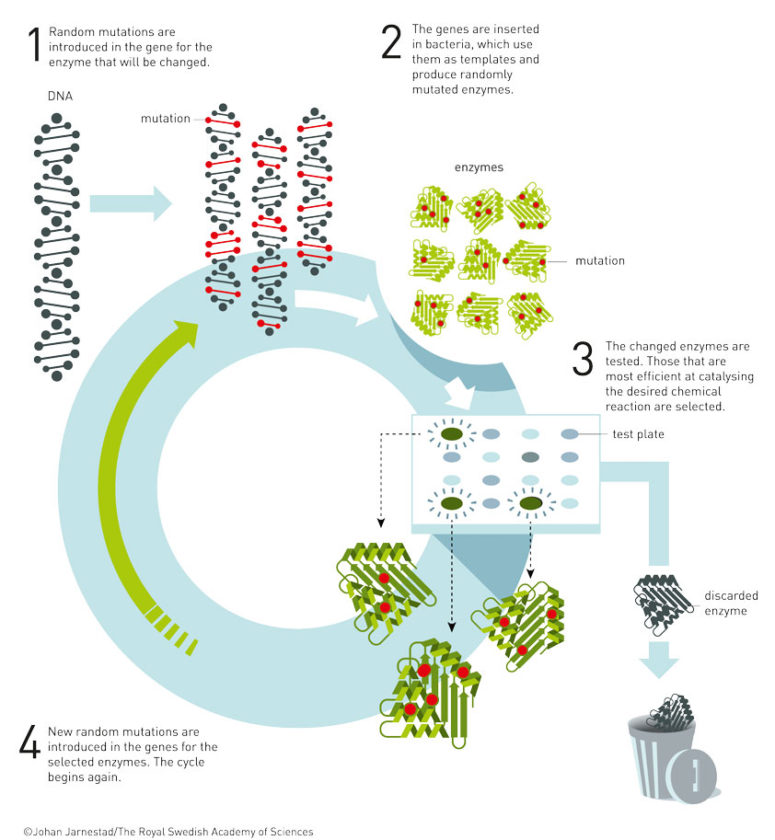 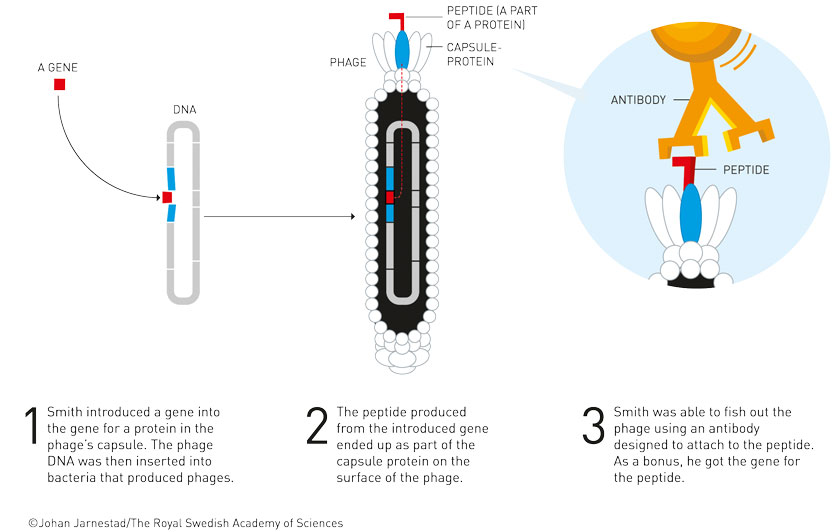 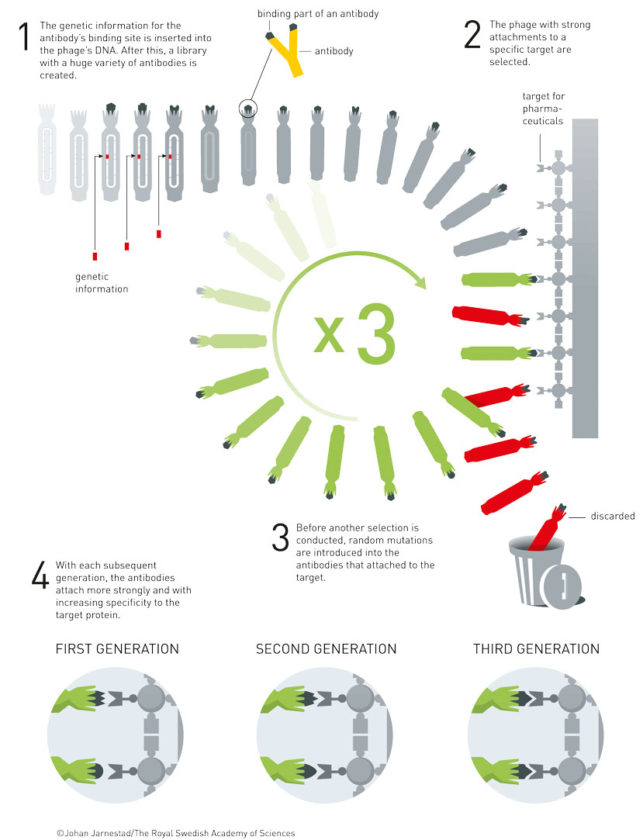 Just in! George P. Smith taking early morning calls at home, immediately after the announcement of his #NobelPrize in Chemistry.

Wise words from our newest laureate, Frances Arnold, who was today awarded the #NobelPrize in Chemistry. pic.twitter.com/rmwzho65dI