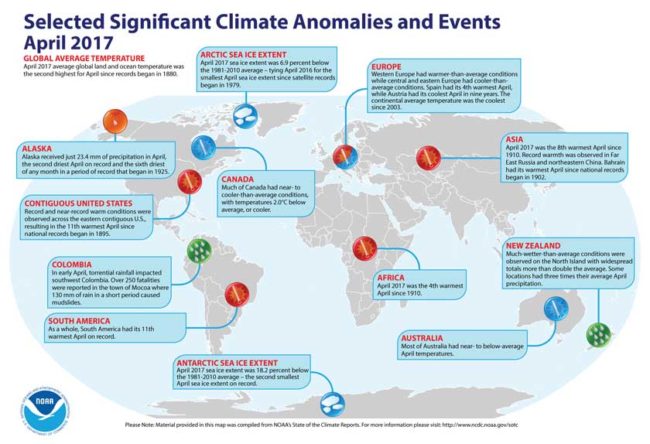 Roughly about the middle of each month, NOAA publishes their Global Climate report for the previous month and so NOAA has now published their assessment for April 2017.

As is typical, precipitation anomalies during April 2017 varied significantly around the world. April 2017 precipitation was generally drier than normal across Alaska, the southwestern contiguous U.S., Mexico, northeastern Brazil, southwestern and northern Europe, Australia, and scattered across southern, central, and eastern Asia. Wetter-than-normal conditions were notable across the eastern half of the contiguous U.S., southern South America, eastern Europe, and across northern and southeastern Asia.

One month in isolation is of course not the whole story, it is the overall trend that yields the unfolding saga. here is a chart illustrating the Global Temperature Anomalies for each and every April since the start of precise measurements in 1880 … 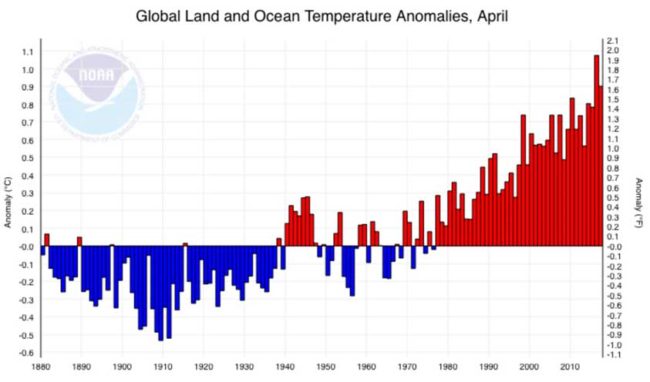 There is nothing magical about April here. If you look across the same timescale for any month, or for all months, it tells us exactly the same story. The April that just passed is also not record breaking, but it is clearly part of the on-going trend.

In summary: should we continue to be worried?