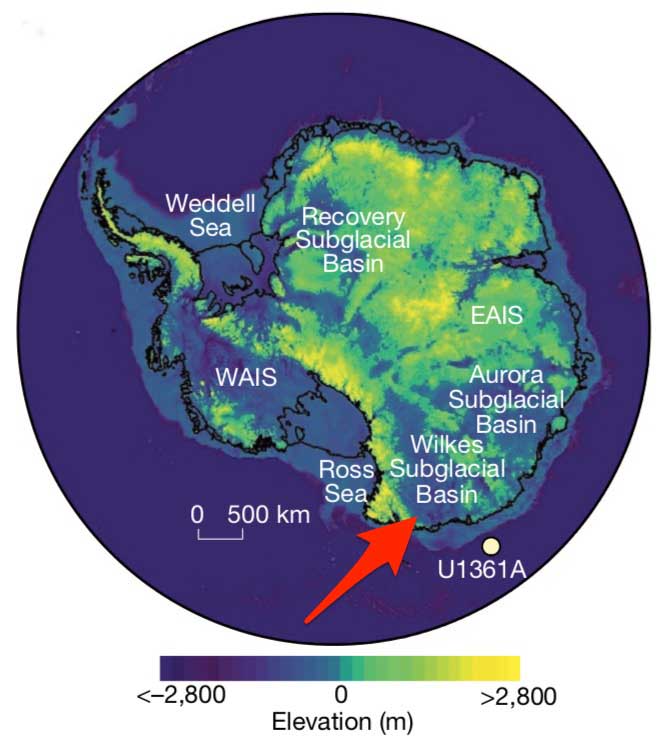 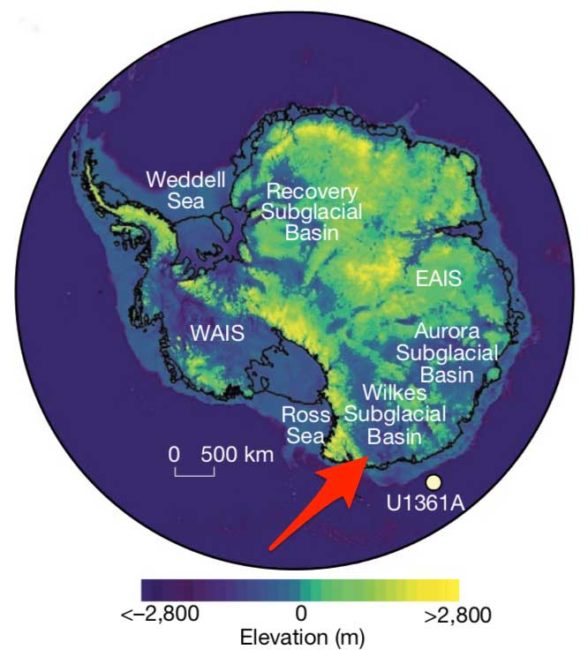 A new study has been published in nature that reveals some very worrying data. Looking back to see what has actually happened in the past is a good way to work out what is coming as we warm the planet, and it is that data that reveals the degree of warming required to melt vast Antarctic ice sheets.

About 2C warming is all that is needed for sea level to rise 20-30 feet – we are already very close to that.

What exactly does this paper do?

we provide evidence from marine sedimentological and geochemical records for ice margin retreat or thinning in the vicinity of the Wilkes Subglacial Basin of East Antarctica during warm late Pleistocene interglacial intervals.

The most extreme changes in sediment provenance, recording changes in the locus of glacial erosion, occurred during marine isotope stages 5, 9, and 11, when Antarctic air temperatures11 were at least two degrees Celsius warmer than pre-industrial temperatures for 2,500 years or more.

But what does that mean?

our study indicates a close link between extended Antarctic warmth and ice loss from the Wilkes Subglacial Basin, providing ice-proximal data to support a contribution to sea level from a reduced East Antarctic Ice Sheet during warm interglacial intervals.

What they do not do is provide conclusive data for the whole of the Antarctic, this relates to just one region, the Wilkes Basin. What it does do is to offer evidence that when the global temperatures were about 2C above pre-industrial measurements, this vast area of ice melted and that led to a sea level rise of 20-30 feet.

We are not far off that 2C rise today, this is all very very close.

How did they find this out?

The team chemically analysed layers of sediment from the ocean floor that originated from the Wilkes Subglacial Basin. They were collected during an expedition of the Integrated Ocean Drilling Program.

The researchers studied sediment layers that had settled on the sea floor during four previous warm intervals that occurred between ice ages (interglacials) over the past 450,000 years.

They found chemical ‘fingerprints’ in the sediment that revealed the changing patterns of erosion as the ice sheet advanced and retreated.

The findings show that:

The international team who conducted this research were led by Dr David Wilson of Imperial College. He and others have a few additional observations …

Studying ice sheet behaviour in the geological past can inform us about future changes. By building a picture of how the ice sheet has grown and shrunk as temperatures have fluctuated, we can predict the sleeping giant’s response to future warming.

“We learned that even modest warming of just two degrees, if sustained for a couple of thousand years, could melt the sleeping giant in some low-lying areas.

“On multi-centennial to millennial time scales, ice sheets will dominate global sea level rise and threaten to coastal regions around the globe. We must decarbonise our economy to keep global warming below 1.5 to two degrees, as targeted by the Paris Agreement, and to avoid major sea level rise in the future.”