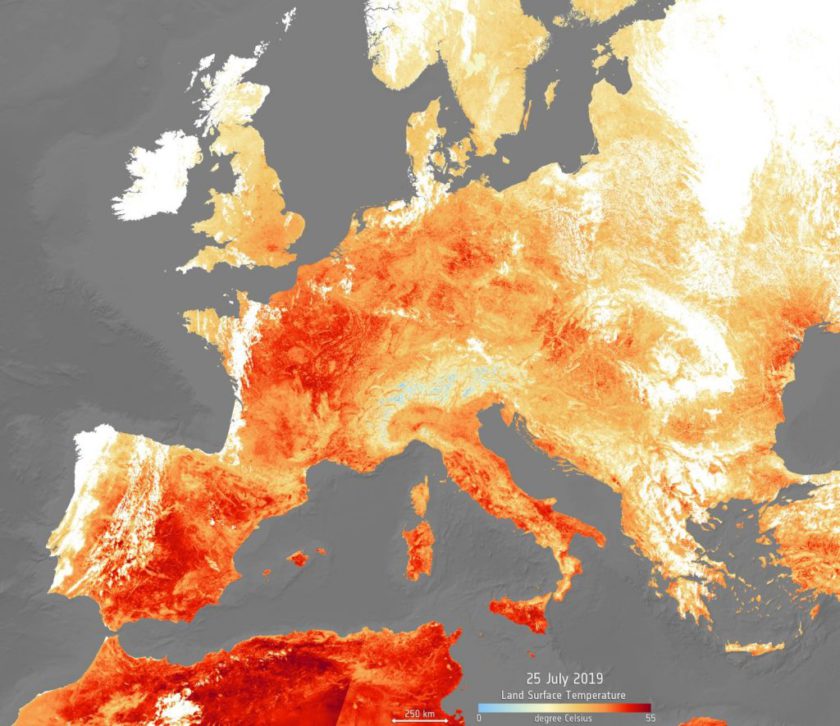 Let’s take a quick look at each.

Study 1: Detection of a Climate Change Signal in Extreme Heat, Heat Stress, and Cold in Europe From Observations

In a warming world this is a trend we should expect. What is a surprise is that parts of Europe are warming faster than climate models predict.

What is also worth appreciating is that it gets rather complicated. Individual regions throughout Europe experienced drastically different temperature trends, which makes it difficult to compare the average European temperatures to specific stations’ extremes.

Ruth Lorenz, a climate scientist at the Swiss Federal Institute of Technology in Zurich, Switzerland, and lead author of the new study…

“Even at this regional scale over Europe, we can see that these trends are much larger than what we would expect from natural variability. That’s really a signal from climate change,”

“We looked further at the hottest day or coldest night per year, so for each year we looked for the maximum/minimum value and how these changed over time,”

European summers and winters will only grow hotter in the coming years as climate change accelerates, impacting cities and people unprepared for rising temperatures, according to the study authors.

Lots of people don’t have air conditioning for instance and it makes this really important,” Lorenz said. “We expected results based on modeling studies but it’s the first time we see it in what we’ve observed so far.”

Published within Nature on 28th August 2019, this study demonstrates clear regional patterns of both increases and decreases in observed river flood discharges in the past five decades in Europe, which are manifestations of a changing climate.

Günther Blöschl, lead author, and director of the Centre for Water Resource Systems at the Vienna University of Technology…

“For each year, we picked the maximum discharge and looked at how these annual peaks change over time,”

Floods are increasing in northwestern Europe because global warming is increasing moisture in the atmosphere, making storms wetter, and shifting the track of incoming storms northward, bringing more rainfall to the region. The storms are also moving slower, so they drop more rain over river catchments, he said.

“We know the mechanism. A warmer atmosphere holds more moisture. Rainfall is increasing, so there’s more water for the floods,”

“Also, the soils are wetter so they can’t take up water, but this is not the most relevant factor,” he said. “More relevant is that the storm tracks are farther north than they were in the past, which means the Mediterranean gets less, the northwestern regions get more rain.”

The study doesn’t make specific projections for the future, but ….

“it implies that what we have seen in the past may continue into the future, and what we’ve seen is well accounted for in climate models,”

“There is a saying: ‘After a flood is before a flood,'” he said. “It’s wise to build levees before a flood, but it never happens. Public spending only starts if there is visible damage.”

(Side note: Blöschl is one of many. The list of contributors is vast and spans many institutions right across Europe).

What does this tell us?

It is further data that reveals that the climate models are correct. The flood changes that they have identified are broadly consistent with climate model projections for the next century. Note that this is not a projection, it is actual observational confirmation.