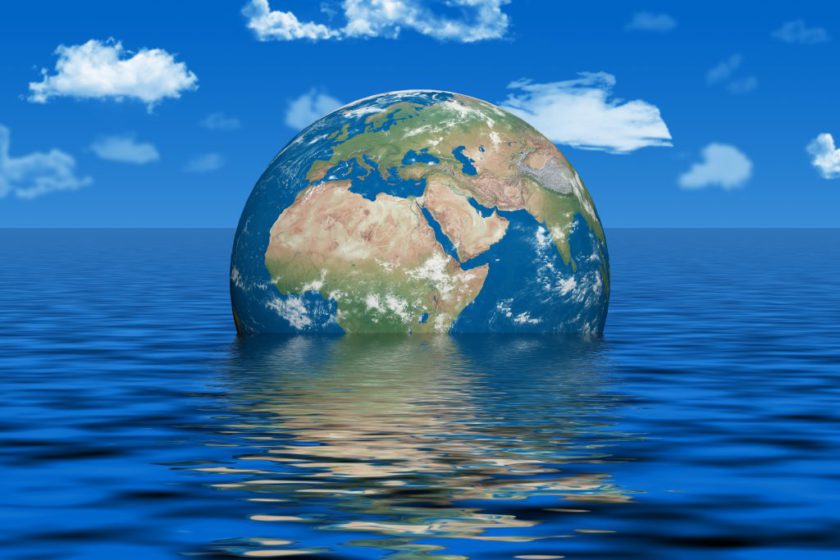 Last May I was writing about sea level rise. That posting was about a new study that had revised the projected sea level rise from 1 meter to 2 meters by the year 2100, just 81 years from now. There is of course nothing magical about the year 2100, it does not mark the end-game. By pumping more CO2 into our atmosphere the consequence is that this greenhouse gas will trigger a temperature rise that continues until a new balance is reached. Slow responding climate systems change in a timescale measured by centuries, not just decades.

We can in fact look back to a time where the global temperatures were 2-3 degrees above our pre-industrial era and see what actually happened. To put that another way, our geological past is a record of what is coming. There is a new study that adds yet more data.

The last 3 million years have consisted of regular pulses of glacials and interglacials. Sea level has risen and fallen to reflect that. In geological terms this age is known as the Pleistocene. The root cause of these cycles are generally recognised as being driven by predictable changes in the orbit of the Earth – for further details see Milankovitch cycles.

Prior to that we have the Pliocene a period that is roughly 3-5 million years ago. Global Temperatures during that period were 2-3 degree above our our pre-industrial era, hence measurements of sea level in the geological record from that period tell us what is coming as a consequence of our CO2 emissions.

A draft of the new study was published in Nature on 30th August 2019. They lay out the following summary within their abstract …

Reconstructing the evolution of sea level during past warmer epochs such as the Pliocene, provides unique insight into the response of sea level and ice sheets to prolonged warming1. While estimates of global mean sea level (GMSL) during this time exist, they vary by several tens of metres2–4, hindering the assessment of past and future ice sheet stability.

Here we show that during the mid-Piacenzian Warm Period, which was on average 2–3 °C warmer than pre-industrial5, the GMSL (global mean sea level) was 16.2 m (most likely, 5.6–19.2 m, 68% uncertainty range) higher than today. During the even warmer

What this study tells us : 4 °C warmer

Pliocene Climatic Optimum (~4 °C warmer than pre-industrial)6, our results show that GMSL (global mean sea level) was 23.5 m above present (most probably, 9.0–26.7 m, 68% uncertainty range). We present six GMSL (global mean sea level) data points, ranging from 4.39 to 3.27 million years ago, that are based on phreatic overgrowths on speleothems from the western Mediterranean (Mallorca, Spain).

This record is unique owing to its clear relationship to sea level, its reliable U–Pb ages and its long timespan, which allows us to quantify uncertainties on potential uplift.

An uncertainty percentage of 68% does not mean this is wrong. It simply means that sea level rise will happen, and that it will be in the range of 5.6m to 19.2m.

What exactly have they got?

The basis for their study is geological data from Artà Cave on the island of Mallorca in the western Mediterranean Sea. It reveals 4-million-year-old geologic evidence providing new insights into magnitude of global sea level rise.

The scientists discovered, analyzed, and interpreted six of the geologic formations found at elevations of 22.5 to 32 meters above present day level. Careful sampling and laboratory analyses of 70 samples resulted in ages ranging from 4.4 to 3.3 million years old BP (Before Present), indicating that the cave deposits formed during the Pliocene epoch. The ages were determined using uranium-lead radiometric dating in UNM’s Radiogenic Isotope Laboratory.

The project focused on cave deposits known as phreatic overgrowths on speleothems. The deposits form in coastal caves at the interface between brackish water and cave air each time the ancient caves were flooded by rising sea levels.

Here are examples of these phreatic overgrowths on speleothems…

“Constraining models for sea-level rise due to increased warming critically depends on actual measurements of past sea level, This study provides very robust measurements of sea-level heights during the Pliocene.”

“We can use knowledge gained from past warm periods to tune ice sheet models that are then used to predict future ice sheet response to current global warming,”

Professor Yemane Asmerom from The University of New Mexico …

“This was a unique convergence between an ideally-suited natural setting worked out by the team of cave scientists and the technical developments we have achieved over the years in our lab at The University of New Mexico, Judicious investments in instrumentation and techniques result in these kinds of high-impact dividends.”

The Implications for us today

This study found that during this period, global mean sea level was as high as 16.2 meters (with an uncertainty range of 5.6 to 19.2 meters) above present. This means that even if atmospheric CO2 stabilizes around current levels, the level would still likely rise at least that high, if not higher.

“Considering the present-day melt patterns, this extent of sea-level rise would most likely be caused by a collapse of both Greenland and the West Antarctic ice sheets,”

They also measured sea level at 23.5 meters higher than present about four million years ago during the Pliocene Climatic Optimum, when global mean temperatures were up to 4°C higher than pre-industrial levels

“This is a possible scenario if active and aggressive reduction in green house gases into the atmosphere is not undertaken,”