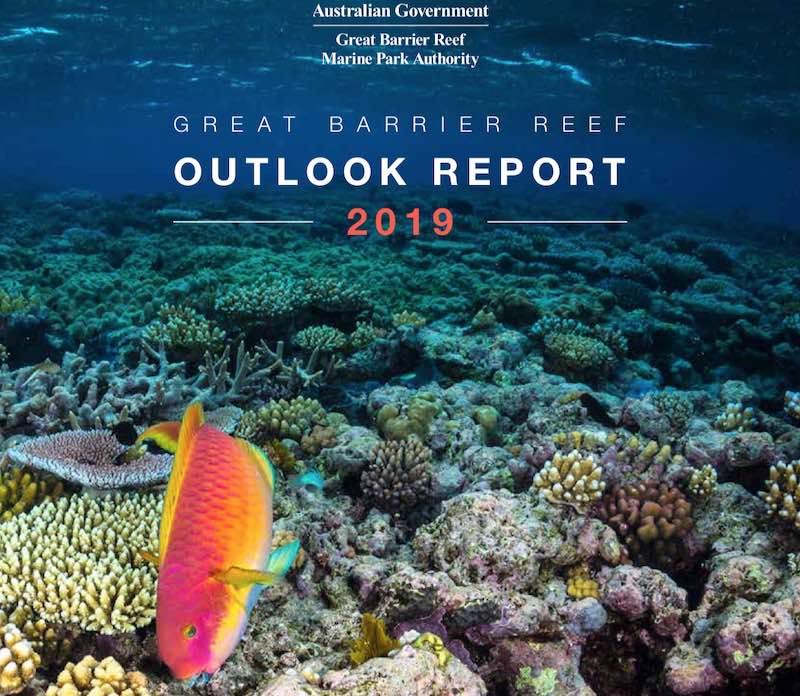 Every five years, an Outlook Report that examines the Great Barrier Reef’s health, pressures, and likely future is published. The latest, the 2019 edition, is now available. It is very grim reading. If you have your finger on the pulse of the Great Barrier Reef then what it reveals will not be a surprise.

Where can I find the Great Barrier Reef report?

Be warned, it is long, detailed, and very comprehensive.

What is a quick summary of it?

In 2009, the Reef was considered to be at a crossroads between a positive, well-managed future and a less certain one.

In 2014, it was seen as an icon under pressure, with continued efforts needed to address key threats. Since then, the Region has further deteriorated.

In 2019, Australia is caring for a changed and less resilient Reef. The challenge to restore Reef resilience is big, but not insurmountable. However, it requires mitigation of climate change and effective implementation of the Reef 2050 Long-Term Sustainability Plan

What is the Most urgent Immediate need? – Address Climate Change

The scientific evidence is clear: initiatives that will halt and reverse the effects of climate change at a global level and effectively improve water quality at a regional scale are the most urgent to improve the Region’s long-term outlook.

Climate change is escalating and is the most significant threat to the Region’s long-term outlook. Significant global action to address climate change is critical to slowing deterioration of the Reef’s ecosystem and heritage values and supporting recovery.

Impacts upon the Great Barrier Reef

Gradual sea temperature increase and extremes, such as marine heat waves, are the most immediate threats to the Region as a whole and pose the highest risk. Sea temperature extremes caused successive mass bleaching events in 2016 and 2017. These events led to unprecedented and widespread coral loss, and flow on effects to fish and invertebrate communities. Such impacts also weaken Traditional Owners’ enduring connection to sea country and the quality and quantity of economic and social wellbeing provided by the Reef.

Natural values of the Region include species, habitats and ecosystem processes. Overall, habitats are assessed as being in poor condition. Habitat loss, degradation and alteration have occurred in a number of areas, substantially affecting populations of some dependent species. For example, the significant and large-scale impacts from record- breaking sea surface temperatures have resulted in coral reef habitat transitioning from poor to very poor condition. Not all habitats have been equally affected and their condition varies across the Region. For instance, coral reefs that have escaped impacts of bleaching, cyclones and crown-of-thorns outbreaks remain in good condition.

Concern for the condition of the Region’s species is also high; many species and species groups are assessed as being in poor to very poor condition. Species assessments reflect both ongoing effects of past significant population declines (for example, from historical commercial harvesting of dugongs and turtles) and current impacts that add further pressure. Humpback whales and the southern green turtle population continue to recover and the breeding rate of urban coast dugongs has improved since the impacts of cyclone Yasi and floods in 2011.

The 10 threats identified in 2014 as presenting a very high risk to the Region’s ecosystem and heritage values are again the highest ranked in 2019. Of the very high risk threats, most relate to climate change or land-based run-off (water quality) affecting values on a Region-wide scale. Given the current state of the Region’s values, actions to reduce the highest risks have never been more time-critical.

Without additional local, national and global action on the greatest threats, the overall outlook for the Great Barrier Reef’s ecosystem will remain very poor, with continuing consequences for its heritage values also. The window of opportunity to improve the Reef’s long-term future is now. Strong and effective management actions are urgent at global, regional and local scales.

The official position is this …

Climate change is the greatest threat to the Great Barrier Reef.

Only the strongest and fastest possible actions to decrease global greenhouse gas emissions will reduce the risks and limit the impacts of climate change on the Reef. Further impacts can be minimised by limiting global temperature increase to the maximum extent possible and fast-tracking actions to build Reef resilience.

During the 2016 bleaching event, an average of 30 per cent of shallow-water corals (at depths between two and 10 meters) were lost across the Reef, with the majority of mortality occurring in the northern third where heat exposure was the most extreme. Bleaching and mortality of coral generally declined with depth, however, severe bleaching and some mortality of corals were also observed on northern reefs along the outer shelf at 40 metres deep.

the 2017 event caused a further decline in coral cover across the northern two thirds of the Marine Park. Global analyses show climate change has contributed to a fivefold increase in the frequency of severe coral bleaching events over the past 40 years. Increasing global temperatures will cause the health of the Reef to decline further.

If the current rate of greenhouse gas emissions continues, global average temperature will continue to increase rapidly, which will have further negative impacts on the Reef. A report by the Intergovernmental Panel on Climate Change advised that coral reefs worldwide are projected to decline by a further 70-90 per cent at a 1.5°C increase in temperature, with greater losses at a 2.0°C increase.

Skip the Book and Watch the Movie