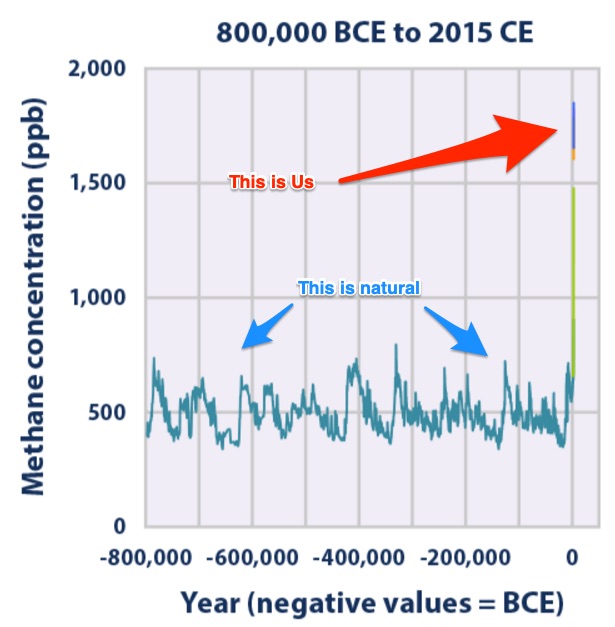 Some preliminary data from NOAA reveals that levels of Methane (CH4) have hit a record breaking high.

Why does this matter, I thought that CO2 was the problem?

Yes, CO2 is the big problem, but Methane is also part of the issue we face.

Methane is one of the most potent greenhouse gases in our atmosphere. It traps 84 times more heat per mass unit than carbon dioxide (CO2).

What is the historical record for Methane?

Via Ice core samples we have a very precise record of what the levels of methane have been within our atmosphere over the last 800,000 years. See image at top of posting.

In the figures, the red lines and circles are globally averaged monthly mean values centered on the middle of each month. The black line and squares show the long-term trend (in principle, similar to a 12-month running mean) where the average seasonal cycle has been removed.

As reported by Scientific American …

“Here we are. It’s 2020, and it’s not only not dropping. It’s not level. In fact, it’s one of the fastest growth rates we’ve seen in the last 20 years,” said Drew Shindell, a climate scientist at Duke University.

Even more troubling, 2019 saw the second-largest single-year leap in two decades. However, this figure may change, as preliminary estimates have trended high, said Ed Dlugokencky, a research chemist at NOAA. The final numbers will likely be unveiled in November after a more detailed analysis.

“We’re still waiting to see what the final number is going to be, and it’s going to be many months before we know that,” Dlugokencky said. “But the fact that methane is increasing means it’s further contributing to climate change.”

What can be done to address this?

Well yes, cows and sheep produce methane, so eating less meat helps in that area. Doing that also helps with your health. That however is not the primary source.

The following however can really help …

The easiest way to stem methane pollution, however, is to limit its release from oil and gas drilling sites, he said. Natural gas is mostly methane, and it is prone to leaking from wells. There are essentially two ways to deal with this problem. The first is to burn the natural gas that seeps out, which turns the methane into carbon dioxide. The second is to plug the leaks.

Companies can install recovery equipment that allows them to collect the natural gas that would otherwise seep out. They can then sell this gas, helping to offset the cost of the equipment. By one estimate, oil and gas firms could cut methane pollution by 45 percent at no net cost.

Despite this, many companies are reluctant to pay for recovery equipment. Firms will instead spend their limited capital on a new drilling site, for instance, which will yield a greater return on investment

But alas, we appear to lack the political will to enact legislation to do it, and yet doing this is an easy win …

“You see the benefits in the first decade or two that you make cuts. You see fewer people dying from heat waves. You see less powerful storms and all of the stuff that comes from climate change,” Shindell said. “As long as we’re still using fossil fuels, we should at least not be leaking out lots and lots of methane.”