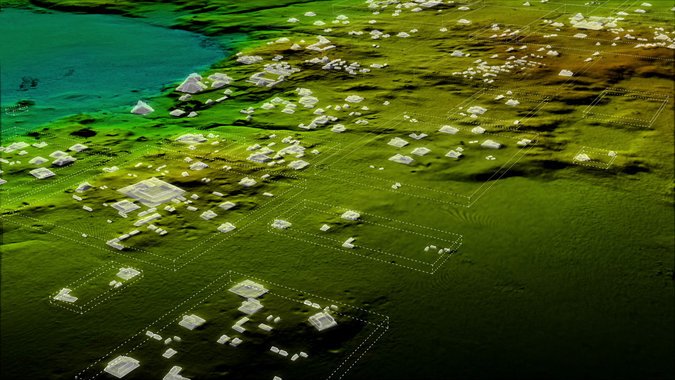 Regarding the above posting title about the new Maya discovery in Guatemala, I’m not exaggerating. Take for example this tweet by Egyptologist Sarah Parcak …

Hey all: you realize that researchers just used lasers to find *60,000* new sites in Guatemala?!? This is HOLY $HIT territory.

So let’s take a pass at all this in a bit more detail.

What exactly has Been announced?

Hidden under the layer of jungle in Northern Guatemala has been a secret that has now been revealed for the first time ever. Archaeologists used a new laser imaging technique known as LiDAR (“Light Detection And Ranging”) to peal back the canopy of trees and reveal a vast city containing more than 60,000 structures that were previously not known to be there. Just to be clear here, for those of you that have watched too many movies, when I use the term “peal back the canopy” combined with the word “laser” hopefully you do get that they have not actually blasted the trees from orbit, but instead simply deployed a tool that enables them to see what is underneath, sort of like an x-ray.

There have been lots of stories about this discovery, and so the coverage has been very good overall. For example, the BBC here, and the Washington Post here, and the New York Times here. The one that is perhaps the best is the coverage within National Geographic.

For this posting I’ll briefly review each of the above sources, give you a key summary, and also pluck out and highlight items of interest. This mosaic of quote-mined snippets builds up into a picture that illustrates the two additional points I mentioned.

After outlining the discovery the BBC story lays out the details of what LiDAR actually is and how it will revolutionise archaeology. That in itself is a story within a story (emphases is mine)…

“I think this is one of the greatest advances in over 150 years of Maya archaeology,” said Stephen Houston, Professor of Archaeology and Anthropology at Brown University.

Mr Houston told the BBC that after decades of work in the archaeological field, he found the magnitude of the recent survey “breathtaking”. He added, “I know it sounds hyperbolic but when I saw the [Lidar] imagery, it did bring tears to my eyes.”

… “Everything is turned on its head,” Ithaca College archaeologist Thomas Garrison told the BBC.

… Described as “magic” by some archaeologists, Lidar unveils archaeological finds almost invisible to the naked eye, especially in the tropics.

One other key point that they draw out is that this is simply the first part on a three year project that is still very much ongoing. What has been revealed is simply a first step. They plan to use LiDAR to map about 5,000 sq miles, and so who knows what other surprises are still waiting to be discovered.

For folks in the UK there is a TV alert. Next Sunday (11th February) Channel 4 will be airing “Lost Cities of the Maya: Revealed“ at 8pm – they will cover all of this.

They quite rightly hail the discovery as a “Game changer”. They take a similar tack as the BBC did and outline the discovery with a few very appropriate quotes from subject matter experts who have been blown away by it all, and then explain what LiDAR is all about. I need not repeat that.

They do however draw out something that is quite fascinating. LiDAR is not simply about archaeology, it actually gives a lot of valuable data …

“We don’t use about 92 percent of the lidar data. We just throw it out to make our maps,” he told The Washington Post. “But there is incredibly valuable information in that forestry data. You’re just seeing the archaeology part because that’s what we focused on, but that data can be used to determine how jungles recover from forest fires, what’s the carbon footprint.”

Still, that 8 percent of data was as astonishing as it was humbling, he said.

“Most people had been comfortable with population estimates of around 5 million,” said Estrada-Belli, who directs a multidisciplinary archaeological project at Holmul, Guatemala. “With this new data, it’s no longer unreasonable to think that there were 10 to 15 million people there — including many living in low-lying, swampy areas that many of us had thought uninhabitable.”

“Everywhere that we looked, there was more settlement than we expected,” said Thomas Garrison, a National Geographic explorer and an archaeologist at Ithaca College. “We knew there was going to be more, but the scale of it really blew our minds.”

One point drawn out is that while LiDAR has been used before in Cambodia, this is the first time that it has been deployed on such a large scale.

noting that he and archaeologists still had to trek through jungles to verify the data while contending with thick undergrowth, poisonous snakes, swarms of killer bees and the odd scorpion.

It is all rather dramatic, and so this next quote highlights how those watching reacted as the data rolled in …

“We could not peel our eyes off the T.V. screen,” he said.

“It’s being blind, and then being able to see.”

… He added that in addition to changing people’s perception of the Maya culture, lidar represented “a sea change” in the field of archaeology.

“I don’t think you see a lot of discoveries happening across the sciences right now that sort of turn a discipline on its head,” he said. “It’s exciting to know that it can still happen.” 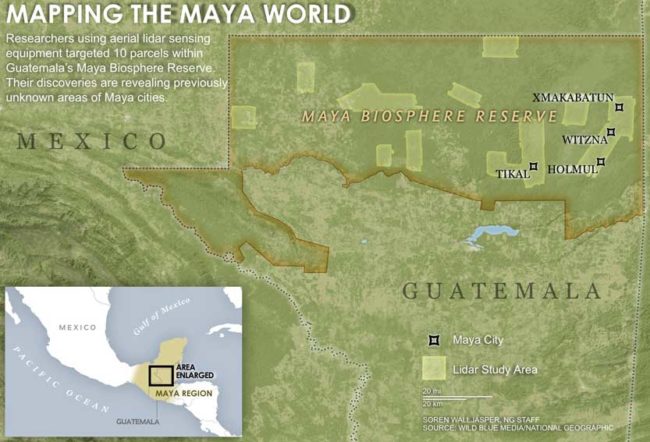 This is perhaps the most comprehensive coverage currently available. That is to be expected because of their magazine format and also their long history and expertise in covering archaeological discoveries.

They open with this …

In what’s being hailed as a “major breakthrough” in Maya archaeology, researchers have identified the ruins of more than 60,000 houses, palaces, elevated highways, and other human-made features that have been hidden for centuries under the jungles of northern Guatemala.

… and then proceed to dig into the precise detail using appropriate pictures to help visualise it all.

A key point that they highlight is this …

The results suggest that Central America supported an advanced civilization that was, at its peak some 1,200 years ago, more comparable to sophisticated cultures such as ancient Greece or China than to the scattered and sparsely populated city states that ground-based research had long suggested.

It is quite literally a game changer, not just in how we can now see things that remained previously hidden, but also in the manner in which we think about the emergence of human civilisation itself. Prior to this we never considered the idea that a major civilisation had once flourished in the tropics and so how we think about that has now been dramatically changed.

If you are going to read a bit more about all of this, but only have time to read one article, then my recommendation is to read the National Geographic one.

For US based folks you have the following. “Lost Treasures of the Maya Snake Kings,” a one-hour special premiering Tuesday, February 6, at 9/8c on National Geographic (yes, that is today).

I’ve been mulling over how to finish this posting. I think the most appropriate way is with this quote …