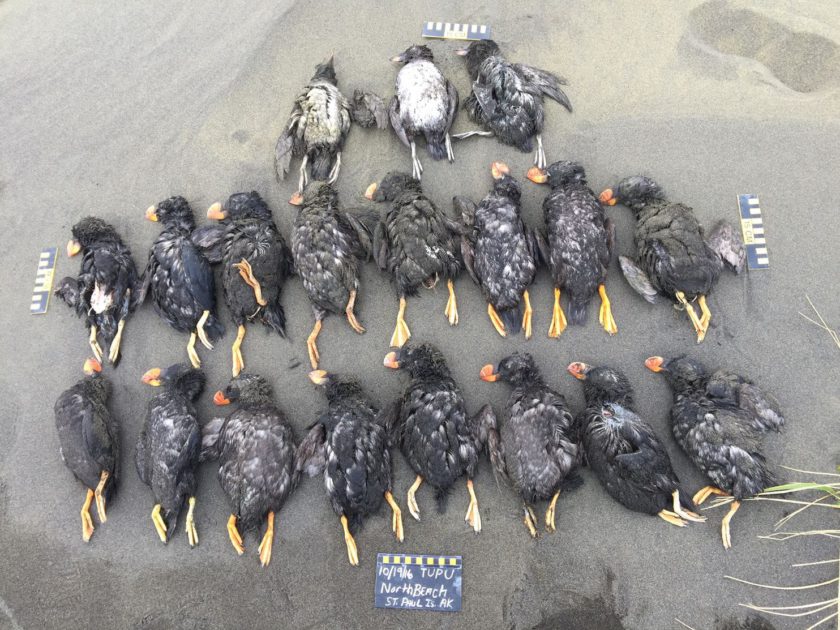 I once recall having a dialog with a deeply religious individual who was babbling nonsense to me about wildlife mass mortality events. His thing was biblical end-times, and so he was presenting such occurrences as “evidence” that we were in the end-times, and that these were manifestations of the wrath of god.

Things like this happen, we don’t need supernatural forces to explain it; no angry Gods required. When a mass mortality event happens then clearly something dramatic such as a sudden loss of a food supply or a disease is the root cause.

Today’s posting is about a new study that highlights the observation that mass mortality events are increasing in frequency and magnitude, and that they are potentially linked with ongoing climate change.

Published in PLOS One on 29th May 2019, it describes how starting in October 2016 dead puffins started washing up on the shores of St. Paul Island, in Alaska.

“It was very apparent that something strange was happening. They just keep washing in and washing in,” said Lauren Divine, director of the Aleut Community of St. Paul Island Ecosystem Conservation Office, who helped oversee the birds’ collection. “Every person in our community knew something was wrong.”

(Side Note: Lauren Divine quoted above is one of the authors of the study)

What has happened, what caused this to happen?

The collected specimens were severely emaciated, suggesting starvation as the ultimate cause of mortality.

Given the numbers found on the island, they estimate a mortality rate of about 3,150 to 8,800 birds.

Just to be clear, this is not normal.

Immediately prior to this mass mortality event, there were shifts in zooplankton community composition and in forage fish distribution and energy density were documented in the eastern Bering Sea following a period of elevated sea surface temperatures.

The dead puffins were adults regrowing flight feathers. That would also indicate a potential contribution of molt stress.

The available evidence suggests that a climate shift has resulted in a bottom-up shift in seabird prey availability. The paper suggests that this being combined with the stress of molt, resulted in this mortality event….

In sum, this Mass Mortality Event was characterized by carcass encounter rates 60–80 times higher than baseline, with an unprecedented abundance of adult Tufted puffins, almost all of which were in flight-feather molt and were starving.

Mass mortality events of marine birds are often linked to food stress. Within the Bering Sea, large-scale mortality events in 1983 and 1997 were linked to changes in prey phenology (primarily zooplankton), abundance and composition, as a result of ocean-climate anomalies. Massive shifts in North Pacific marine ecosystems have been observed from 2013 to 2017 as a result of anomalous atmospheric conditions, including the sustained presence of the northeast Pacific marine heatwave. Thus far, these shifts have been linked directly to two seabird Mass Mortality Events. In the Bering Sea, atmospheric conditions from 2014 onwards resulted in decreased winter sea-ice extent and earlier retreat, and associated elevated water temperatures. By 2015/2016, observations were indicative of reductions to forage fish abundance (capelin) and energy density (juvenile Pollock), and reduced abundance of large lipid-rich copepod species and euphausiids on the southern Bering Sea shelf  also reported that the distribution of higher quality prey species (i.e. large lipid-rich copepods and euphausiids) may have shifted northward in the Bering Sea, associated with the retracted cold pool. Of the two species primarily affected by this die-off, Tufted puffins prey on forage fish (i.e. juvenile Pollock, capelin, pacific sandlance) and invertebrates (euphausiids and squid), whereas Crested auklets are planktivorous, feeding primarily on euphausiids and large calanoid copepods. As such, Tufted puffins, Crested auklets and other piscivorous or planktivorous seabirds foraging on the southern Bering Sea shelf, may have been subjected to food stress, which in combination with molt for Tufted puffins and southward migration in Crested auklets, may have ultimately caused the documented wave of mortality.

Why is all this note worthy?

Mass Mortality events such as this are indicators of a changing world, and particularly of climate warming.

… “We are now just bracing for what is going to wash in next,” Divine said. “It’s kind of terrifying.”…

This mass mortality event has captured some media attention

One Further observation – it is not just Puffins