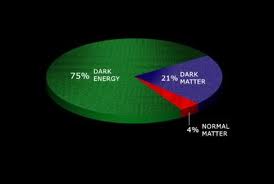 The exciting thing about topics such as dark matter and dark energy is that it very strongly highlights how little we really know. We do of course now understand a great deal, but there is still much that is simply not known.

Look up and you see the stars, so exactly how many stars are there in our Galaxy? Approx 200-400 Billion (note the word “billion”, not “million”). That is such a large number, you cannot grasp it.

Ah but wait, that is just one galaxy, so how many galaxy’s are there? There are probably more than 170 billion (1.7 × 1011) galaxies in the observable universe, and they vary in size from as few as ten million (107) stars to giants with a hundred trillion (1014) stars.

Now here comes the punchline … all that only accounts for 4.6% of the universe, the other 96% is completely unknown, we simply have no idea what it is.

Ok, lets start with Dark Matter. There are measurable discrepancies between the mass of large astronomical objects determined from their gravitational effects, and the mass calculated from the “luminous matter” they contain; such as stars, gas and dust. We call that gap “Dark Matter”. That dark matter accounts for 23% of the mass-energy.

Now, lets move on to briefly discuss “Dark Energy“. The universe is expanding at an accelerating rate, the current means to account for this is to introduce dark energy … once again we have no idea what this is.

That means that atoms, that is all those galaxies, is just 4.6% and so far the rest is a complete mystery.

Life is well-defined, right? Actually no, there is also a concept called Biological ‘dark matter’. We know about three domains of life: bacteria (you have human cells, but for even 1 of those you have 10 bacteria cells as well), archaea (single-celled microorganisms) and eukaryotes (an organism whose cells contain complex structures enclosed within membranes, yes that’s all animals and plants and includes you).

So that accounts for all life? Nope.  Most species look like tiny single cells, and to work out where they fit on the tree of life biologists need to be able to grow them in the lab. Colonies like this give enough DNA to run their genetic analyses. The problem is, the vast majority of these species – 99 per cent of them is a reasonable bet – refuse to be cultured in this way. “They really are the dark matter of the biological universe,” Inside your body itself is biological dark matter …

Our ancestors faced huge mysterious unknowns, lightening, thunder, floods, weather, the sun, moon and stars, and so they attempted to grasp meaning by attributing such things as gods. Today our understand has now given us a good understanding of what all these are. No gods need apply, they all turn out to be quite natural. However, even with this vastly improved understanding, there is still much that we simply do not yet know, so do not fool yourself by thinking we know most things, we quite clear don’t.

This then makes things quite exciting and so we stand at just the start of the human journey of gaining an understanding and have many many steps to take.

TED Talk By Nathan Wolfe – What is there left to Explore?