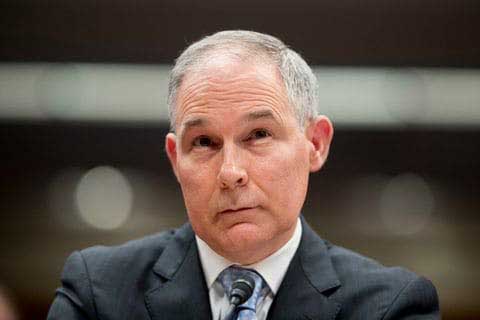 Scott Pruitt is in a bit of hot water (again), but this is no surprise. As an utterly incompetent Trump appointee, “Hot water” is more or less his place of permanent abode. Scientific American put out an article on 5th June which reports that the …

EPA must produce the opposing body of science Administrator Scott Pruitt has relied upon to claim that humans are not the primary drivers of global warming, a federal judge has ruled.

What is the background story here?

On the 9th March 2017 Mr Pruitt conducted an interview on CNBC’s “Squawk Box. During this he fully established his anti-science stance with this claim …

“Measuring with precision human activity on the climate is something very challenging to do, and there’s tremendous disagreement about the degree of impact. So no, I would not agree it’s a primary contributor to the global warming that we see.”

He is fully entitled to have his own opinion and to express it even when it is obvious to most that it is not factual. He was however not simply being interviewed as Scott Pruitt, but was being interviewed as the head of the EPA, hence he was expressing this as an “official” EPA stance.

An organisation known as Public Employees for Environmental Responsibility (PEER) responded by filing a Freedom of Information Act (FOIA) request asking the EPA to explain where Pruitt got this information from. In response to this the EPA did exactly nothing, they simply ignored it. A FOIA request entails specific legal obligations, hence PEER then took the EPA to court to enforce the request.

The EPA argued that responding to this request …

“would require EPA to spend countless hours researching and analyzing a vast trove of material on the effect of human activity on climate change,”

How did the judge rule?

“EPA’s strained attempt to raise an epistemological smokescreen will not work here to evade its obligations under the FOIA…The public statements of an agency head about the causes of climate change, even if those statements do not reflect an ‘Agency decision,’ but merely ‘personal opinion,’ may nonetheless guide the agency’s regulatory efforts and, to the extent any agency records provide the basis for such public statements, those agency records are a perfectly proper focus of a FOIA request.”

You can find a full summary of it all here within the official court document.

He has no evidence

This puts Mr Pruitt and also the EPA is a very sticky position. This is specifically because there is no scientific basis for his stance. It might indeed be tempting to think that Mr Pruitt will be embarrassed by this charade, but he appears to be utterly immune to being embarrassed.

No seriously I mean it. You really don’t need to look far to find bizarre stories concerning Mr Pruitt’s behaviour that would embarrass most normal people. Here for example is a story on Splinter from a couple of days ago on 4th June that reports how he forced an EPA aid to find a used Trump hotel mattress.

House Dems release transcript of interview with Millan Hupp, EPA Administrator Scott Pruitt's Director of Scheduling and Advance, where she describes how Pruitt tried to secure an old mattress from Trump's hotel in DC: https://t.co/XyRY85iLzO pic.twitter.com/Ede58yngHA

What this latest ruling does have the potential to do is to highlight the complete lack of any scientific basis for the climate denial stance that is promoted by Mr Pruitt.

The failure of the EPA to comply with the ruling will result in more court appearances, they simply can’t duck this or ignore it.