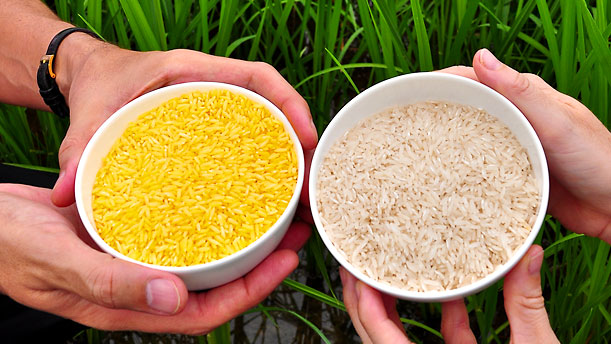 Let’s start by clarifying exactly what Golden Rice is. Once we have that under our belt we will then move on to some of the various claims surrounding it and identify what is fact and what is anti-GMO propaganda.

What is “Golden Rice”?

“Golden Rice” is the term used to describe a variety of rice that has been genetically modified to include vitamin A within the edible parts. The vision to create this started in 1982 and finally became a reality in 2000. The first trials began in 2004. In 2005 a new variety, known as “Golden Rice 2”, was created. It produces even more Vitamin A. Fast forward to now and the latest update is that all trails have been completed; it has been formally approved for use by the US, Australia and Canada. Bangladesh have now announced that they will start using it later this year.

This is a huge deal, a game changer, that will vastly improve the lives of millions. Each and every year Vitamin A deficiency kills 670,000 children under the age of 5, and leaves another 500,000 permanently blind. The fortification of rice with Vitamin A, a staple food crop for over half of the world’s population, will change this.

There exists a strong and very vocal anti-GMO lobby that demonises genetic modification. This is perhaps a reflection of a huge disconnect between the public understanding and the actual science. Most of what we consume does not occur naturally, but has instead been bred and modified for our benefit. Tweaking genes is simply the latest tool we have for doing this.

To illustrate just how wide that gap is, a Pew survey in 2015 asked “Whether GMO foods were safe to eat” …

That is perhaps one of the biggest current gaps between the scientific community and public understanding.

So what are the scientific facts?

No reports of ill effects have been documented in the human population from genetically modified food.[10][11][12] There is a scientific consensus[13][14][15][16] that currently available food derived from GM crops poses no greater risk to human health than conventional food,[17][18][19][20][21] but that each GM food needs to be tested on a case-by-case basis before introduction.[22][23][24]

The announcement of the general use of Golden Rice has motivated the Anti-GMO lobby to kick into high-gear and proceed to promote outright lies. Let’s take a brief look at some of the claims …

Claim: The genetically modified Golden Rice will not address the issue of Vitamin A Deficiency (VAD)

Their claim is this …

Despite having a near-insignificant amount of beta-carotene, Golden Rice is heralded as the solution to VAD prevalent among children and women in developing countries such as Bangladesh and the Philippines. In its 2018 approval, the US Food and Drug Administration (US FDA) concluded that “the level of beta-carotene in Golden Rice is too low to warrant a nutrient content claim.”

This is simply not a factual statement, but instead is an outright deception. Dr Steve Novella debunked this specific nonsense here. The context of the FDA statement is the observation that US consumers eat very little rice, hence it has very little impact for US consumers. When the Anti-GMO advocates latched on to this observation by the FDA and quote-mined it out of context, the FDA had to issue the following rebuttal …

U.S. consumers eat rice at very low levels compared to consumers in the specific Asian countries with vitamin A deficiency for which golden rice was developed. IRRI reports that consumption of rice by children in Bangladesh is 12.5 g/kg body weight/day, compared to about 0.5 g/kg bw/d for U.S. consumers). Rice is the major staple in those countries and levels of rice consumption are many-fold higher than they are in the U.S. While a U.S Consumer would be unlikely to eat enough of the rice to achieve that value (10-19 % of the NDI or RDA), that does not mean that the level of consumption of golden rice in the targeted countries would be insufficient to accomplish the intended effect of supplementing their very low consumption of vitamin A-containing foods. Consuming rice containing the levels of pro-vitamin A in GR2E rice as a staple of the diet could have a significant public health impact in populations that suffer from vitamin A deficiency.

Claim: We don’t need it

In other words, their proposed solution is to persuade millions to abandon the only crop they have access to and have been using for centuries, completely change their faming methods and associated farming infrastructure, and adopt crops that will not grow in the regions they live it – good luck with that. That’s not a viable or credible counter proposal, if it was it would have already been done.

Claim: It’s all a Marketing Tool

Golden Rice is something that is very much at odds with much of the Anti-GMO propaganda of large corporations wishing to take land from farmers by forcing them to pay huge sums for such crop variations and that they are simply in it for the money. The creation of Golden Rice is not motivated by profit, but instead is a humanitarian inspired initiative …

The seeds are being given to farmers for free, that’s a mandatory requirement of the initiative. The only motivation is to address a very serious problem.

When you find yourself on the team that is arguing against a humanitarian initiative that will potentially save the lives of millions, and your only counter-arguments consist of the promotion of outright lies, then it truly is time to hit pause and seriously reconsider your stance.