MIT Technology review has published the details of a rather interesting study regarding the decline of religious beliefs.

Here is a picture … 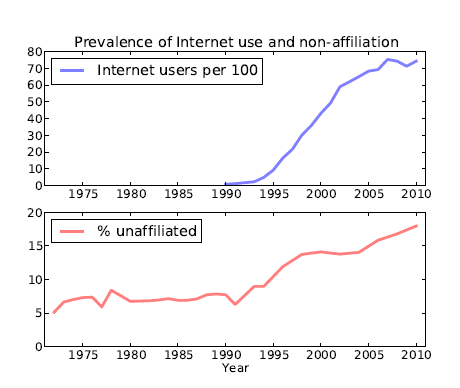 If your immediate go-to thought is, “Hang on a second, that’s just a correlation, it does not establish any causation“, then congratulations, your scientific skepticism is in good working order. If like me you are not-religious and so this just happens to be a correlation that aligns with that position, and you still have scientific skepticism kicking in, then you earn a few bonus points .. well done.

So did the MIT Technology Review get something so basic wrong?

Actually no, they got it spot on, because the article (and the study itself) nails it, and identifies several interesting correlations and also applies the current degree of caution to the conclusions. The correlations identified are …

He [Allen Downey] finds that the biggest influence on religious affiliation is religious upbringing—people who are brought up in a religion are more likely to be affiliated to that religion later.

However, the number of people with a religious upbringing has dropped since 1990. It’s easy to imagine how this inevitably leads to a fall in the number who are religious later in life. In fact, Downey’s analysis shows that this is an important factor. However, it cannot account for all of the fall or anywhere near it. In fact, that data indicates that it only explains about 25 percent of the drop.

He goes on to show that college-level education also correlates with the drop. Once it again, it’s easy to imagine how contact with a wider group of people at college might contribute to a loss of religion.

Since the 1980s, the fraction of people receiving college level education has increased from 17.4 percent to 27.2 percent in the 2000s. So it’s not surprising that this is reflected in the drop in numbers claiming religious affiliation today. But although the correlation is statistically significant, it can only account for about 5 percent of the drop, so some other factor must also be involved.

In the 1980s, Internet use was essentially zero, but in 2010, 53 percent of the population spent two hours per week online and 25 percent surfed for more than 7 hours.

This increase closely matches the decrease in religious affiliation. In fact, Downey calculates that it can account for about 25 percent of the drop.

That’s a fascinating result. It implies that since 1990, the increase in Internet use has had as powerful an influence on religious affiliation as the drop in religious upbringing.

Now all that is fascinating. The first, religious upbringing, is still in itself something to mull over, for example why has there been an increase in people being brought up in non-religious families. As for the second, I well recall (from my religious days) church elders issuing warnings rooted in their observations that university attendance can and does seriously damage faith, and so they were implicitly encouraging parents to encourage their kids to not go to university and instead remain ignorant, but religious.

As for the third, it is perhaps what we should expect. Whenever the flow of information has increased, we have been changed by that new information. Bubbles of social insulation are burst as people bask in new information. Historical examples abound of how this can change us …

It can be argued that there have been a few own goals – for example the revelation of the abhorrent degree of abuse and the associated cover-up amongst the ranks of Catholic clergy. This alone will have greatly impacted and shaken the faith of many in the same period of time that the study covers – the discovery that the belief did not simply have a few black sheep, but rather that the belief itself was a system of abuse was truly shocking, so clearly the Internet had no hand there … right?

Ah but hang on a moment, why has something that has been going on for centuries suddenly entered into the public domain? I’d like to suggest that the greatly increased flow of information has prevented it all being covered up, and so the Internet has facilitated this new flow of information that was previously buried and brushed over. I read the reports and not just the media stories, I watched the press-conferences on-line, I blogged about it all … and I was not alone, many others were doing exactly the same. In the pre-Internet days I would not have been able to do any of this to the same degree.

In can be argued that the Hijacking of the GOP back in the 1970s by specific variations of rather extreme Christian belief has in turn led to vast swathes of the population rejecting such beliefs, perhaps because they dislike the specifics being promoted (rejection of pro-choice, rejection of the scientific consensus, etc..), and perhaps also because of an existing political affiliation with parties that oppose the GOP. But once again, the flow of such information, the utterly absurd and truly silly stuff from the GOP, and the rational criticism of such silliness, has greatly increased due to the Internet, and so I’d argue that it has enabled the wide exposure of this.

But Correlation does not imply causation?

Generally people live inside bubbles, self-selected spheres of influence. We naturally gravitate towards those who hold the same beliefs and that becomes our social circle and is where our ideas are confirmed as true by those around us, and that in turn naturally leads us to accept this as further confirmation. However, exposing ourselves to new different ideas, and criticism of the ideas we embrace, will potentially burst such bubbles and change us – going to university does exact that and so that is why an increase in the number of people going to university will indeed yield a measurable effect. To not find that correlation would be a huge surprise. In exactly the same way, having access to the Internet has a similar effect, except it happens on a far larger scale. We are suddenly exposed to information sources that are critical of religious beliefs that do not really withstand critical analysis and so that will also clearly lead to people drawing far more rational, better, non-religious conclusions.

If we were to discover that this was not happening then that would be a huge surprise, and so the fact that it is, is indeed to be both expected and also inevitable.

“The internet: The place where religions come to die“