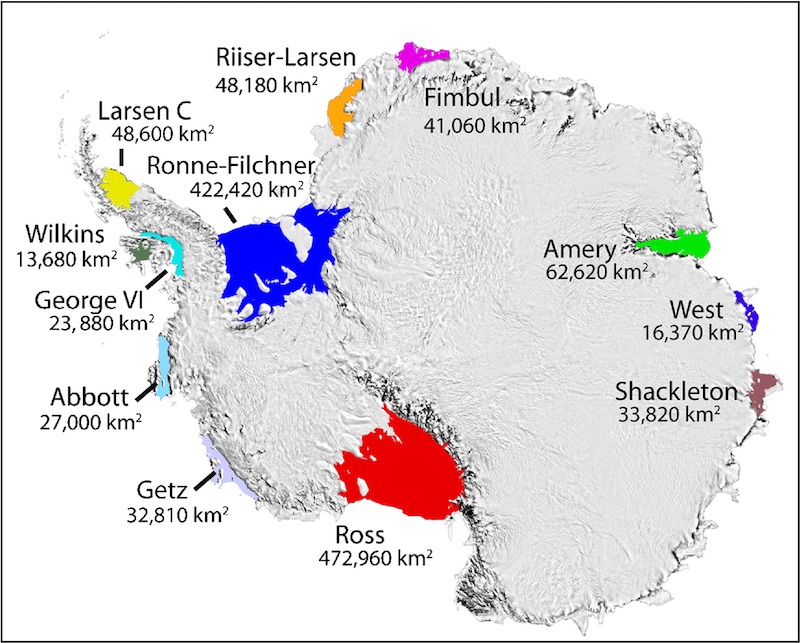 Antarctica is of course a landmass, however surrounding it and reaching out into the ocean around it are vast ice shelves. What is going on under that Antarctic Ice has been of great interest to researchers. Of very specific interest is how ocean currents undermine and melt them from below.

Ice floats, so if it melts, then it will not impact sea level, so why does this matter?

It matters because these Ice shelfs act as a barrier that keeps the land-based ice locked in place. If an ice shelf collapses then that opens the door that releases it. This will impact sea level.

There is a newly published paper that throws new light on the topic.

Published June 30, 2020 within the Proceedings of the National Academy of Sciences, the paper describes measurements of the ocean beneath the center of the Ross Ice Shelf, the Earth’s largest ice shelf.

Nobody has directly measured underneath since the 1970s, and so this is the second ever such direct measurement taken. As you can of course envisage, since the previous measurement was 40 years ago, technology has moved on, but even then their results at that time were fascinating, they found complexity; multiple layers with different degrees of salinities and temperatures between the layers.

The newest published paper lays it all out like this …

We present the second dataset ever collected from this region, the first having been gathered 40 y prior. Our data provide a basis for better understanding the complex processes that drive melting. They illustrate the degree of variability in the mid-water column, a region largely ignored in modeling. We also observed ephemeral refreezing on the ice shelf underside, with implications for both melt rate and upper ocean dynamics. This insight emphasizes the importance of in situ observations in undersampled environments.

They used a hot-water jet, modelled on a British Antarctic Survey design, to drill through 350 metres of ice to the ocean below. They were able to keep the hole liquid long enough to make detailed ocean measurements as well as leave instruments behind to continue monitoring ocean currents and temperature. These data are still coming in via satellite.

The stability of large Antarctic ice shelves has important implications for global sea level, sea ice area, and ocean circulation. A significant proportion of ice mass loss from these ice shelves is through ocean-driven melting which is controlled by largely unobserved oceanic thermodynamic and circulatory processes in the cavity beneath the ice shelf.

Direct measurements enable a far better understanding to be gained, so they used hot water to drill a borehole melted in the central region of the shelf in December 2017. The measurements were then compared with the 1977 data.

Measurements from the Boundary

The basal boundary layer is the oceanic layer just beneath the ice where melting and refreezing takes place.

From here Temperature and salinity observations support the notion of slow and intermittent melting.

What is less well understood, but also potentially a massive agent for change, is the impact of meltwater on the global thermohaline circulation, an oceanic transport loop that sees the ocean cycle from the abyss off the coast of Antarctica to tropical surface waters every 1,000 years or so.

Antarctic ice shelves are like a pit stop in this loop and so what happens in Antarctica resonates globally. Faster melting ice shelves will change the ocean stratification, with repercussions for global ocean circulation – and one result of this appears to be greater climate variability.