What is really causing Climate Change?

If you follow any well-known climate scientists on twitter that you will perhaps observe that often people will pop up to explain that they are all wrong and that the real cause of Global Warming is … well basically anything except the actual cause – us. You can hear the face-palming from the other side of the planet.

So who are you going to believe?

Your choice is between folks who have read a few random articles on Breitbart and have no scientific training, or more or less the entire climate science scientific community that consists of individuals who have dedicated their entire life to looking at all the available evidence in detail and have carefully considered every possibility.

In the end, it is not actually a vote, nor should it be a plea to “I’m a scientist, trust me”. Instead it really comes down to good solid robust objective evidence.

OK, let’s list a few of the rather obvious possibilities and briefly examine each. With a hat tip to Climate Scientist @KHayhoe Katharine Hayhoe, here is a brief overview of some of these alternative possibilities.

Is it variations in Solar Activity?

We have measurements of Solar activity and output, and can overlay that with the observed warming. There is simply no correlation.

Perhaps it is Volcanoes?

Research findings indicate unequivocally that the answer to this frequently asked question is human activities. Some variations of climate denialism might claim that Volcanoes emit far more than we do, but this is simply not factual.

Rather shockingly, the amount we are emitting is still dramatically increasing and is not decreasing.

Perhaps Climate Change is A natural Variation due to Orbital Cycles?

Other bodies in the solar system exert a gravitational pull on us, and so our orbit varies in well-known and well-measured cycles. This is what bumps us in and out of ice ages. Could this be the cause of the observed warming?

The length and timing of interglacials is well understood. We have already passed the current interglacial peak and should be on track for cooling. 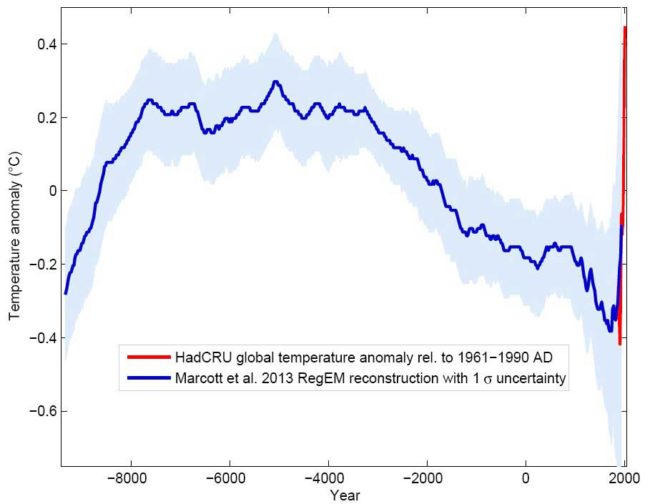 It’s just a natural cycle of the existing climate system

El Nino cycles move heat around the system and transfer it between the ocean and the atmosphere. These cycles do not create heat, they simply transfer it. If indeed our atmosphere was warming due to this mechanism then the heat content of the ocean would have to decrease, but that’s not what we observe and measure.

The total heat content of everything is increasing. So far the ocean has soaked up most of it. 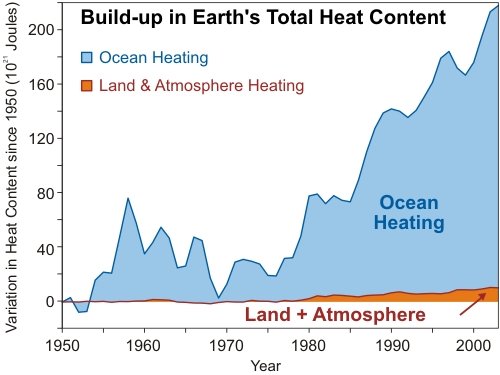 Could it be cosmic rays?

How about the magnetic pole moving? Planet Niribu? Geoengineering?

What about an unknown factor we don’t know about yet?

We have known for a very long time, since about the 1850s, that CO2 will absorb and then emit Infrared energy.

Solar Radiation comes from the rather blindly obvious source. Because the CO2 is there in our atmosphere, it absorbs that and then emits heat. If there was nothing, no Water vapour, or CO2, then the surface of the Earth would be about -18 C

Point 2 – we are pumping out vast amounts of CO2, we are the source of the measured increase

We have precise measurements going back 800,000 years. The Keeling curve gives us direct observations going back to the 1950s, and prior to that we have measurements of trapped bubbles of air from ice core samples. Here is the data …

Combine the above two points and what you get is this …

We can take this one step further by pointing out that doing nothing is not a sensible option.

Either we take decisive meaningful action and address the issue of Global Warming, or alternatively nature itself will rise up as a disruptive force – the choice is ours.