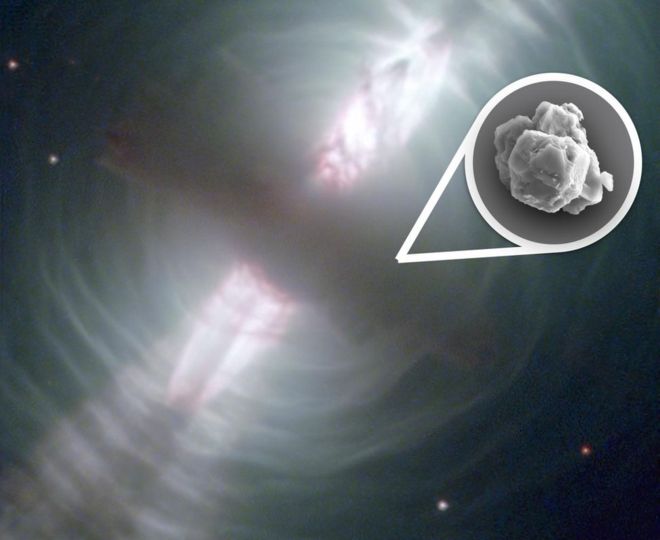 “Oldest material on Earth discovered” was a recent story. You will perhaps often see such amazing headlines, stories or claims regarding something. Some may take it and face value and simply accept what is being claimed. How exactly did they date the stardust grains?

If, for example, you visit the geologic section of London’s Natural History museum, you might spot a bit of a meteorite that is from Mars. Would you then wonder “How do they know that, how did they work out that it is from Mars?“. If curious, would you ask?

Side note: Such samples have elemental and isotopic compositions that are similar to rocks and atmosphere gases analyzed by spacecraft on Mars. (See here for more details).

OK, back to the stardust story.

It is quite an astonishing discovery. For context, we know that earth is 4.54 billion years old … unless of course you are a young earth creationist. Yes, some truly and sincerely believe earth and the entire universe is 6,000-10,000 years old.

If you are wondering “How do we know the age of the Earth?“, then go here for details that will answer that.

Fifty years ago a meteorite fell in Australia, and it is samples of this that the research team analysed. Via this link we get some direct insights into the work they conducted …

“This is one of the most exciting studies I’ve worked on,” says Philipp Heck,  a curator at  the Field Museum, associate professor at the University of Chicago, and lead author of a paper  describing the findings in  PNAS . “These are the oldest solid materials ever found, and they tell us  about how stars formed in our galaxy.”

The materials Heck and his colleagues examined are called presolar grains— minerals  formed before the Sun was born.

These bits of stardust became trapped in meteorites where they remained unchanged for billions  of years, making  them time capsules of the time before the solar system.

But presolar grains are hard to come by. They’re rare, found only in about five percent of  meteorites that have fallen to Earth, and they’re tiny —a hundred of the biggest ones would fit on  the period at the end of this sentence. But the Field Museum has the largest portion of the  Murchison meteorite, a treasure trove of presolar grains that fell in Australia in 1969 and that the  people of Murchison, Victoria, made available to science. Presolar g rains for this study were  isolated from the Murchison meteorite for this study about 30 years ago at the University of  Chicago.

“It starts with crushing fragments of the meteorite down into a powder,” explains  Jennika Greer, a graduate student at the Fi eld Museum and the University of Chicago and co - author of the study. “Once all the pieces are segregated, it’s a kind of paste, and it has a pungent  characteristic—it smells like rotten peanut butter.”

This “rotten - peanut - butter - meteorite paste” was then dissolved with acid, until only the  presolar grains remained. “It’s like burning down the haystack to find the needle,” says Heck.

Once the presolar grains were isolated, the researchers figured out from what types of  stars they came and how old they w ere.

“We used exposure age data, which basically measures  their exposure to cosmic rays, which are high - energy particles that fly through our galaxy and  penetrate solid matter,” explains Heck. “Some of these cosmic rays interact with the matter and  form new elements. And the longer they get exposed, the more those elements form.

“I compare this with putting out a bucket in a rainstorm. Assuming the rainfall is  constant, the amount of water that accumulates in the bucket tells you how long it was exposed,” he adds. By measuring how many of these new cosmic - ray produced elements are present in a  presolar grain, we can tell how long it was exposed to cosmic rays, which tells us how old it is.

But the age of the presolar grains wasn’t the end of the discovery. Since presolar grains  are formed when a star dies, they can tell us about the history of stars. And 7 billion years ago,  there was apparently a bumper crop of new  stars forming — a sort of astral baby boom.

“We have more young grains that we expected,” says Heck. “Our hypothesis is that the majority of those grains, which are 4.9 to 4.6 billion years old, formed in an episode of enhanced star formation. There was a time before the start of the Solar System when more stars formed than normal.”

This finding is ammo in a debate between scientists about whether or not new stars form at a steady rate, or if there are highs and lows in the number of new stars over time.

“Some people think that the star formation rate of the galaxy is constant,” says Heck. “But thanks to these grains, we now have direct evidence for a period of enhanced star formation in our galaxy 7 billion years ago with samples from meteorites. This is one of the key findings of our study.”

Heck notes that this isn’t the only unexpected thing his team found. As almost a side note to the main research questions, in examining the way that the minerals in the grains interacted with cosmic rays, the researchers also learned that presolar grains often float through space stuck together in large clusters, “like granola,” says Heck. “No one thought this was possible at that scale.”

Heck and his colleagues look forward to all of these discoveries furthering our knowledge of our galaxy.

“With this study, we have directly determined the lifetimes of stardust. We hope this will be picked up and studied so that people can use this as input for models of the whole galactic life cycle,” he says.

Heck notes that there are lifetimes’ worth of questions left to answer about presolar grains and the early Solar System.

“I wish we had more people working on it to learn more about our home galaxy, the Milky Way,” he says.

“Once learning about this, how do you want to study anything else?” says Greer. “It’s awesome, it’s the most interesting thing in the world.”

“I always wanted to do astronomy with geological samples I can hold in my hand,” says Heck. “It’s so exciting to look at the history of our galaxy. Stardust is the oldest material to reach Earth, and from it, we can learn about our parent stars, the origin of the carbon in our bodies, the origin of the oxygen we breathe. With stardust, we can trace that material back to the time before the Sun.”

“It’s the next best thing to being able to take a sample directly from a star,” says Greer.

The secret sauce is this. When high-energy particles hit a grain of dust floating is space, small fractions of the target nuclides break up. The resulting atomic fragments accumulate in the grain, and their concentrations are proportional to the timespan the grains were irradiated.

While radiometric dating based on the U−Pb decay system can provide ages with high accuracy and is often the method of choice for samples of Solar System materials, it has not yet been successfully applied to presolar grains. Presolar grains have large isotopic anomalies in essentially every element, so each grain may have a distinct initial lead isotopic composition, uranium isotope ratio, and age, robbing the U−Pb system of some of its most desirable characteristics for geochronology. Until these obstacles are overcome, this exposure age dating is the preferred method for determining presolar ages of individual stardust grains.

There have been previous studies. Those analysed assemblages of thousands of Silicon carbide (SiC) grains. The thinking from that is that it was suggested that individual grains might show much higher presolar ages. This is what this new study has done, and yes indeed, some of the individual grains are very old.

In this work, we provide presolar ages based on cosmogenic Ne isotopes, significantly increasing the total number of presolar grain ages. We also present reevaluated ages from previously published data. This will enable us to further advance our understanding of the lifetimes of interstellar dust.

Voyger plays a role in all this

What else have they considered?

Another aspect that was not considered in previous studies is the potential exposure of presolar grains to the enhanced particle flux of the early active sun. Large excesses of cosmogenic noble gases in single olivine grains in some primitive meteorites have been attributed by some workers to a high flux of energetic particles from the early sun, although others contested this conclusion. Recently, however, unambiguous evidence for an enhanced exposure of hibonite (an aluminum−calcium oxide)—possibly the earliest solar nebula condensate—to energetic particles from the early active sun was reported by Kööp et al. This implies that some of the presolar grains we studied might have been exposed to the same enhanced solar particle flux. We are, therefore, also required to estimate the upper limit of cosmogenic nuclides concentrations produced in the early Solar System rather than in the ISM [interstellar medium]

This is the oldest solid material ever found. – 7 billion years old.