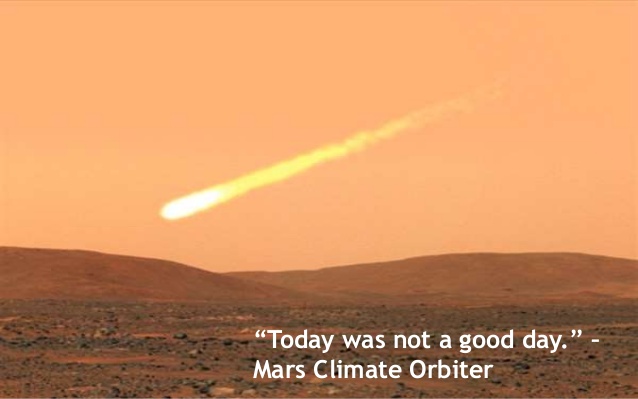 Phil Plait writes about the “The Great Kersten Blunder”, the story of a probe to Venus that was lost because a programmer made a stupid mistake.

The great Kersten Blunder is about the error made by Kersten (programmer) on the Vigor space probe’s converting program. He made an error in the value of converting millimeters to inches. He mistakenly set the value to 24.5 instead of 25.4 which made the probe miss the planet Venus and was consequently lost in space. This Blunder cost the government over 2 billion dollars’ worth of lost technology due to a simple measurement error.

It sounds believable simply because programmers do have a bit of a reputation for screwing things up. There is another story about a show-of-hands survey at at conference where the speaker asked a room full of managers, “If you knew that your team had written the software within the flight control system for a new aircraft, would you be prepared to get on it for the first actual test flight?“. Apparently only one chap put his hand up and nobody else did. Later when asked about it, he clarified his stance by explaining, “If my team had written the software, then I would be quite safe, it would never get off the ground“.

OK, back to the Venus probe. Phil’s skeptic alarm quite rightly had gone off, and so he looked into it all …

a great number of things set off my skeptic alarm:

But I have to admit, the very first thing that made me doubt this tale’s validity was that I had never heard of the Vigor Venus probe, and I’m kinda familiar with space exploration.

…  I checked, and sure enough, no such mission ever existed. Right away, that’s enough to tell you this story is made up. The other problems I listed are icing on the cake. Searching for a programmer named Kersten just yields this story, or links to people who have nothing to do with space mission planning.

So where did it come from?

Phil does not know. Apparently over at the Straight Dope message board it is also debunked, and that is where Phil’s reader found it because he hangs out there.

I made one last stab and sent an inquiry to the National Physical Laboratory, who published an educational guide to measurement in mechanical engineering that includes the Kersten Blunder as an anecdote. I asked if they knew the source of the story, and received a very nice response that “sadly, it may indeed be recycling an urban myth.”

And as evidence, he linked to this thread.

… to which somebody else replies …

This is all becoming weirdly incestuous.  The guide you mentioned is the very one in which I first read about the Great Kersten Blunder (and why I inquired here!

So I speculate that the author of the NPL guide just might be the actual alpha for this one, and just made the story up to make the guide a bit more interesting to the readers.

It could never happen … right?

When you spend billions of dollars building and launching a space probe then every single line of code is going to be examined with a degree of highly appropriate and almost mandatory paranoia. With that thought in mind you would not expect a one-line blunder to actually cause the loss of the entire mission … right?

Actually, it did indeed once happen.

I well-recall the Mars Climate Orbiter fiasco back in 1999, so much so that I subsequently repeated that sorry tale of woe at times.

As explained on the Wikipedia page on the topic …

on September 23, 1999, communication with the spacecraft was lost as the spacecraft went into orbital insertion, due to ground-based computer software which produced output in non-SI units of pound-seconds (lbf s) instead of the SI units of newton-seconds (N s) specified in the contract between NASA and Lockheed. The spacecraft encountered Mars on a trajectory that brought it too close to the planet, causing it to pass through the upper atmosphere and disintegrate.

The Ultimate Point of this long Saga

Don’t trust anything you hear on the internet. Or anywhere. Ever. Just because someone says something doesn’t make it true.

Ask for evidence. Sources. Supplementary data. And don’t forget to critically evaluate that evidence! If it came from NASA, it’s more likely to be factual than if it came from a person you heard on a late night radio show who sells perpetual motion machines and shady conspiracy theories.

Well OK yes, since I did just highlight that point, then I better be darn sure that I can backup the cause of the MCO (Mars Climate Orbiter) failure with something a tad more robust than Wikipedia. So here you go …

The MCO MIB has determined that the root cause for the loss of the MCO spacecraft was the failure to use metric units in the coding of a ground software file, “Small Forces,” used in trajectory models. Specifically, thruster performance data in English units instead of metric units was used in the software application code titled SM_FORCES (small forces). The output from the SM_FORCES application code as required by a MSOP Project Software Interface Specification (SIS) was to be in metric units of Newton- seconds (N-s). Instead, the data was reported in English units of pound-seconds (lbf-s). The Angular Momentum Desaturation (AMD) file contained the output data from the SM_FORCES software. The SIS, which was not followed, defines both the format and units of the AMD file generated by ground-based computers. Subsequent processing of the data from AMD file by the navigation software algorithm therefore, underestimated the effect on the spacecraft trajectory by a factor of 4.45, which is the required conversion factor from force in pounds to Newtons. An erroneous trajectory was computed using this incorrect data.

… and so instead of injecting it into the correct orbit they fired it into the atmosphere and fried it.

There was rather a lot of deployment of various well-known anglo-saxon phrases that can perhaps be best translated for a family friendly audience as “oops”. I’ll leave it up to your imagination to reconstruct the original turn of phrase.