Have you ever wished you could make a valuable scientific contribution? Well, did you know that you can do so by sitting at home? Let me tell you a bit about Galaxy Zoo. Look up and you find billions upon billions of galaxy’s. Astronomers have utilized robot telescopes to capture images of many of these and so they need your help to classify them all because doing it correctly requires the human touch. It has not been possible to automate this task, so your participation is needed.

OK, its not new, first launched in 2007 and then re-launched in 2009 with an improved version, it has been a resounding success, yet its only the beginning, there is still a lot of work needed. This is a joint collaboration between researchers from many institutions, including Oxford University, Portsmouth University, Nottingham University, Johns Hopkins University, Yale University, University of California, Berkeley and Fingerprint Digital Media, Belfast, so by helping, you can truthfully claim to have worked with all these folks.

So why do it this way? The answer is that the very best pattern recognition engine is sitting between your ears, and no machine can come anywhere near it. You also don’t need to be an astronomer because no previous experience is necessary. To get you going, they have an on-line tutorial where you will be shown spirals, ellipticals etc., and asked to try guessing the correct category before being shown the  answer. You will also see pictures of stars and satellite trails, the robot telescope will have recorded these as well, so they need to be filtered out. You then get tested with some additional pictures and signed up if you get a reasonable number of correct results. So in essence, all you need to bring to the table is a passion for science and are willing to explore and classify galaxies.

What is truly astonishing about all this is that you may get to see images never seen before by any other human, you will truly be boldly going where no one has gone before. Once an image has been captured by the robot telescope, yours may be the first human eyes to see it.

The original Galaxy zoo asked you to judge if the image of a galaxy was elliptical or spiral and, if spiral, whether it is rotating in a clockwise or anti-clockwise direction. Why? Well, theorists believe that spiral galaxies can merge and become ellipticals, and also that ellipticals can become spirals. Some also speculate that the rotation of spiral galaxies is not random. A large survey could prove or disprove this, and if it turned out to be correct, then we need a major rethink of cosmology, you could help change the way we understand the universe.

Galaxy Zoo 2 expanded the details being captured and asks for a much more detailed classification.

Has it been worth all the effort? Truly yes, already lots of exciting discoveries have been made …

Also … here is a link to the main site.

So, can you really discover something new, or is this simply asking you to become a glorified filing clerk? The answer is that you truly can make new discoveries. In 2007, a Dutch school teacher Hanny van Arkel discovered something entirely new, so it was named Hanny’s Voorwerp (that dutch for Hanny’s Object). There are various theories about what it might be, but nobody knows. What we can observe is that it does not contain any stars and has a huge central hole over 16,000 light years across. Here is an image of it … its the green blob below the normal looking spiral galaxy IC 2497 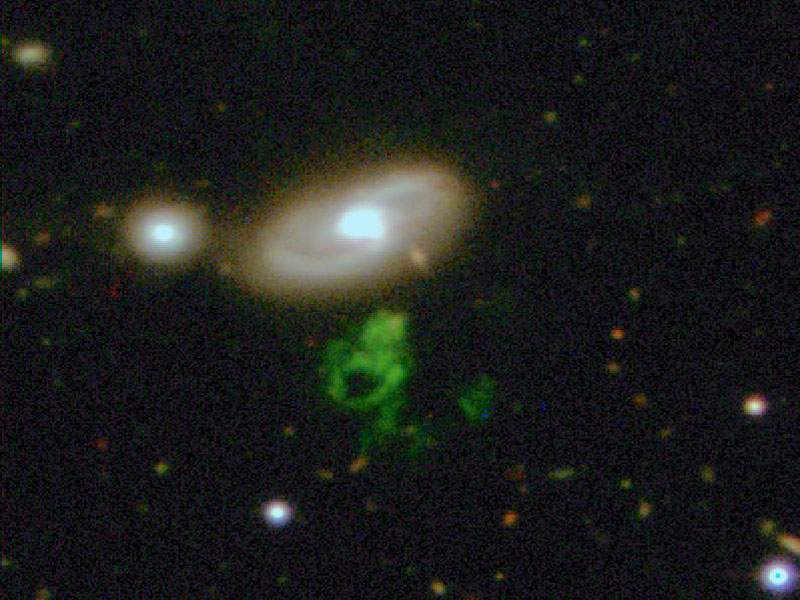