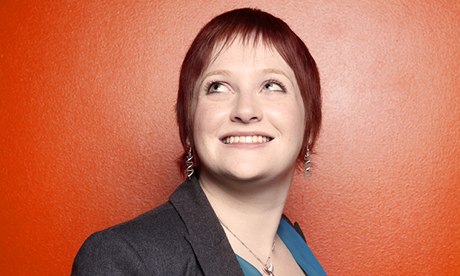 Back n March 2012, out of mischief and frustration, Elise Andrew started a Facebook page entitled “I Fucking Love Science”. She was in the final year of her biology degree at the University of Sheffield, “working on my dissertation and procrastinating as much as possible,” when a friend asked her to stop posting science stories on her Facebook page. “He told me I was boring the shit out of him and he was going to block me. He suggested I set up a special page. He was kind of a dick, but I am grateful.“.

And the rest is history … because it hit a note and went viral.

So what will you find you you go there? Basically short sharp digestible nuggets of scientific truth packaged into a quick easily accessible layout. You will find meme-style science illustrations of plain-speaking summaries of the latest research, and links to oddities such as a video of a student singing an explanation of string theory to the tune of Bohemian Rhapsody.

Want to know a bit more about Elise? Well now you can because, the Guardian interviewed here, and so here is how that chat went …

Where did the name come from?

“A meme went round three years ago of a woman screaming: ‘I fucking love science’.”

Is the expletive necessary?

“That’s how I feel about science. There isn’t a word in the English language like ‘fuck’ that expresses such an emphasis. My mum calls it IFLS to her friends and mumbles the real name under her breath. Although the name is strong, we rarely post anything that could be construed as offensive. There’s no swearing and I don’t swear that much in everyday language.”

Did your obsession with science begin when you were young?

“Not at all. One of the reasons I’m so passionate about science is that it wasn’t correctly taught to me. I got excited at university. I remember my first lecture on my first day in evolutionary biology, how populations and species change. I sat thinking: ‘Why doesn’t everyone know this?’ I look back on it almost in horror: I came so close to not knowing how exciting our world is.

“In science every question answered leads to 10 more. I love that science can never ever be finished. From a young age people think: ‘Science is hard and boring.’ We don’t tell children: ‘Yes, you have to learn these formulae and theorems, but then you go on to learn about nuclear reactions and stars.'”

Did the site take off immediately?

“It grew by a thousand followers every day. When I finished my degree it became my obsession. It got to a million users last September and 2 million by December. The exciting figure is the 3.5 million “talking abbots” – the number of people interacting with the site. We crash a lot of sites we link to, including Nasa, which made me proud. My parents were supportive, though they were worried I wasn’t focused on finding a job. Even now they’ll say: ‘For God’s sake, get off Facebook, do some real work – oh, that is your real work now.'”

“That was unpleasant, although I never hid my gender. The first reactions were benevolent sexism: ‘You’re a girl, you’re so sexy, science just got cooler.’ When I got upset about this I was told I should take it as a compliment. But looking at 10,000 comments about your appearance makes you very uncomfortable.

“In the popular science community there is still a vision of women as outsiders, which is ridiculous. Women make up 50% of biology PhDs and physics and chemistry are catching up. On the site, it’s 50-50 male-female readers.

“I’ve also been accused of being a shill for Monsanto and big Pharma. I’m not paid by them, but I don’t think big Pharma are hiding the cure for cancer to make more money and I don’t think a vaccine causes autism. I’m anti-Monsanto but pro-GM.

Has the site made you rich?

“YouTube has a revenue share option, Facebook doesn’t. The only way to make money is to sell merchandise. We sell T-shirts. I donate a lot of the money to charity, the rest is reinvested or used for expenses. I could be making a lot of money; sites offer to pay me to link to them exclusively, but I like our independence and don’t want to lose our readers’ trust. I have a full-time job in Toronto, handling the social media content of LabX [a media group]. I like the stability of a regular pay cheque. If I were a starving student, I might have said yes to some offers, but I can afford to pick and choose.”

“HIV and cancer posts are very popular. The biggest post we did was of a biodegradable urn that turned you into a tree: a seed was planted in your ashes.”

What do you still have to learn?

“Astrophysics and astronomy. I want to talk about them with some level of expertise. People see me as an authority and I’m so not. People say: ‘I never believe anything unless it’s on IFLS’, and I’m like: ‘Don’t think like that, my God, check everything I say. I don’t know what I’m talking about.’ I’m still figuring out things myself. We’re all on this journey together.”

“The aim is to turn it into a TV show on the Science channel. We talk about whatever we want. I don’t like speaking to camera, I get most excited talking to people. I’d like to be behind the camera, not in front of it. People treat me as a celebrity, which is very flattering but scary.”

What about the future?

“I’m about to marry my fiancé, Jake. He’s my best friend and I don’t know how I’d cope without him. I don’t want children for a long time, but we may get a springer spaniel.

“Long term, I want to write articles and by the beginning of October I will have launched my own website, IFLScience. I’m tired of linking to other people’s work. I want to use my own voice.

“People have offered me book deals but I don’t feel qualified enough – I’d like to do my masters degree and PhD at Sheffield. I’m looking into employing people to help curate material. I reject around 90% of the material I’m sent.

“This is my entire life. The laptop is always open. I sleep five or six hours a night, then crash at the weekend. I’m learning to eat properly and exercise. I relax by watching silly sitcoms like Scrubs and How I Met Your Mother.”

What do friends think of your success?

“‘Jammy cow.’ No, people are very supportive. I’m riding the wave and seeing where it goes.”

If curious about that YouTube channel, well here is the latest episode where she is talking about the government furlough and the NASA services that have been deemed exempt, dinosaur fossils shutting down oil pipelines, insect sex predicting the weather and much more.

Oh and if you just happen to F****** hate Facebook, well worry not because you can fucking love science here at the IFLS blog.